Stephanie Meadow will take a three-shot lead into the final round of the Danielle Downey Credit Union Classic after firing a four-under-par 68 on moving day at Brook-Lea Country Club.

The Jordanstown professional has made her way to 11-under for the tournament after rounds of 66 and 71 over the first two days. Going into day three in a share of the lead at minus seven, Meadow looked a class above in bursting from the pack after an almost flawless round of golf.

“Anytime you can lead going into the final day is always a bonus,” said Meadow, who has hit 39-of-42 fairways so far this tournament.

“I’m excited to have a tiny bit of a cushion, but tomorrow I just need to keep doing my same thing. Get as far ahead as I can as soon as possible.”The only thing that held her back from an even lower number was a double bogey on the par-3 9th hole. “I was going good until I misjudged the wind and hit it over on nine, which is absolutely a no-go,” Meadow said. “To come back on the back nine with a 4-under was pretty awesome. The greens are firming up, so any downwind holes are pretty hard to get close.”

It may be the first time in the final pairing for Meadow, but she is no stranger to finding the winner’s circle. In early April, she captured the IOA Championship presented by Morongo Casino Resort & Spa on the first hole of a sudden-death playoff. That experience is something she is sure to use to get her through on Sunday.

“I can draw on that since I’ve already been there, in contention playing good golf,” said Meadow. “At the IOA Championship I played really well and came from behind. If I can go out with that mentality, even though I am not in that current situation, I think that will help. Once you do something you want to do it again, especially when you know the feeling.”

Leading the hunt is a group of four golfers in second place at 8-under par, including Jenny Coleman, who shot the low round of the day with a 6-under 66 to move 24 places up the leaderboard. 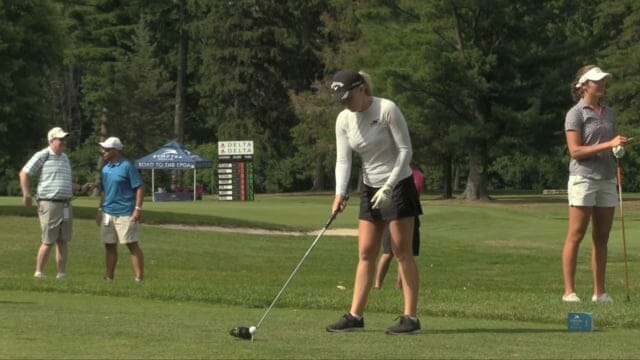