Moynihan progress brought to a halt by torrential rain 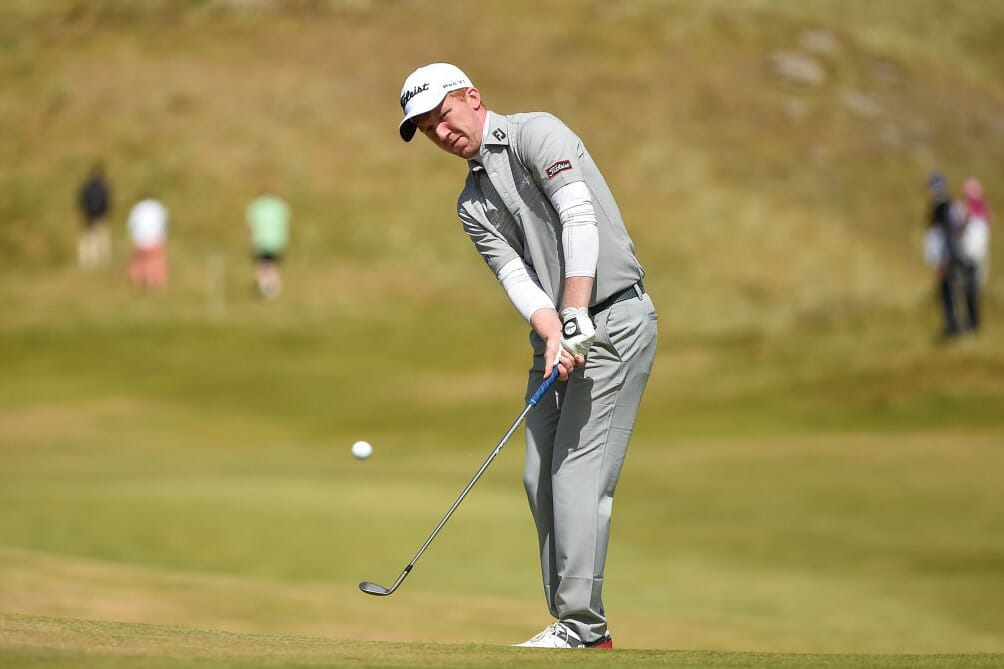 Gavin Moynihan was making his way into contention when heavy rain ground play to a halt at the La Vaudreuil Golf Challenge in France.

Moynihan was three-under-par on his round through 12 holes and six-under for the tournament when the course was deemed unplayable due to flooding. The Dubliner finds himself six shots off the lead but just two strokes behind second place as his resurgence to form continues on the Challenge Tour this week.

Ruaidhri McGee was one of the early finishers unaffected and his three-under-par 68 sees him at minus two, currently good enough for a share of 28th.

That’s the same number as Old Conna’s Neil O’Briain who picked up one shot through his first nine holes before play was abandoned, however Michael Hoey had dropped a stroke as he made the turn at one-under for the tournament with nine to play tomorrow.

Ardglass’ Cormac Sharvin will be hoping that the cut falls at par or better after his one-under 70 saw him return a 36-hole total of even par.

The Island’s Paul McBride will be cursing his luck having picked up three birdies in five holes when his momentum was crushed by the rain. At plus two for the tournament and with three to play, McBride will need to pick up exactly where he left off tomorrow to have any chances of making the cut.

Ballymena’s Dermot McElroy (+7) and Clandeboye’s Jonathan Caldwell (+8) still have holes to play but require a miracle to advance past the morning session.

An excellent five-under-par 66 handed Richard McEvoy the lead on 12-under at the end of a day which was brought to a premature end at Golf PGA France du Vaudreuil.

The Englishman leads by four shots with Paul Maddy McEvoy’s nearest challenger on eight-under-par, however he still has nine holes of his second round to play.

McEvoy, who held a one-shot first round lead, took full advantage of the benign conditions early on Day Two as he carded two birdies in as many holes to extend the gap at the top. He picked up a further three birdies before his first bogey of the week arrived on the par four 15th.

He signed off his second round with a superb gain on the final hole to put the pressure on the afternoon groups who were, rightfully as it transpired, wary about the forecast adverse weather conditions.

McEvoy described the morning conditions as ‘quite British’ before the heavy rain arrived and was pleased with his day’s work.

“I’m very pleased,” McEvoy said. “I got off to a really good start again this morning with two birdies in my first two holes.

“The weather was quite British out there today with a bit of drizzle early on and it was a bit cooler, which was really nice.

“My game was very solid again. I drove the ball great again, putted really nicely and for me, if you put those two together, a good score comes along.

“The little bit of rain made it a bit more receptive going into the greens and the fairways weren’t quite as firm and fast, but it was nice.

“We got great conditions this morning and we had the better of the greens as well having played early. I’m in a great position. I’ve had two lovely rounds but I’ve got two more to go yet.”

Last year’s SSE Scottish Hydro Challenge hosted by Macdonald Hotels and Resorts winner will continue to take each shot as it comes during the weekend, an approach which has paid dividends thus far.

“I’ve not really had a game plan this week,” he said. “It’s the old cliché but I’ve just hit each shot as it comes.

“I’ve been enjoying my golf. I like the golf course here; it sets up well to my eye and it just means standing up and hitting shot by shot – it’s worked well so far!

“I’ll be doing much the same over the weekend – just enjoying it, playing with a smile on my face and just playing to win.”

Players will complete their second rounds from 7.30am local time on Saturday, with the third round scheduled to get under way following its completion.