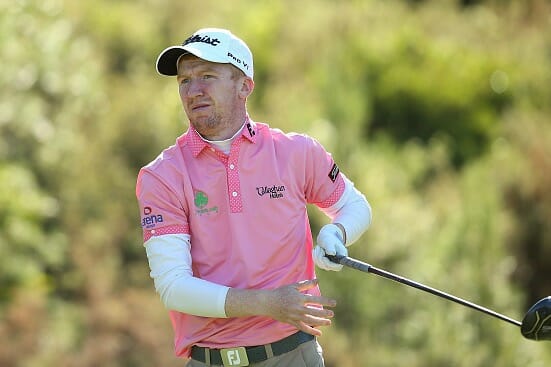 Both Gavin Moynihan and Michael Hoey have moved to within three shots of the lead as Ruaidhri McGee fell away on moving day at the Italian Challenge presented by Cashback World.

The Irish duo have been neck-and-neck in the scoring charts this week and today was no different as the pair returned their third successive three-under-par round of 68 to sit in a share of 7th at nine-under.

They went about their business in similar fashion too with just the one blemish surrounded by four birdies on each card to ensure Spaniard, Emilio Cuartero Blanco is within their grasp ahead of the final round.

Unfortunately the same couldn’t be said for Rosapenna’s McGee who went backwards as those around him soared in Sardinia; his one-over-par 72 seeing him drop 19 places down the leaderboard into a tie for 24th.

But it’s all about Emilio Cuartero Blanco who will take a one shot lead into the final round after carding a seven-under-par round of 64 this afternoon.

The Spaniard, who equalled the lowest round of the day, came from six shots behind to take pole position ahead of Sebastian Soderberg and Jack Senior at the end of Moving Day at Is Molas Resort as he searches for his first European Challenge Tour title.

The 27-year-old shone in the Sardinian sun as he holed five birdies in a blemish-free five under par front nine to lie one behind overnight leader Soderberg at the turn. A bogey on the 11th did not disturb his rhythm as he eagled the next hole to take the lead as the Swede dropped shots.

Under the baking sun, Cuartero Blanco kept his cool to gain another shot on the 16th and post a career-low round of 64 on the Challenge Tour as he joined fellow Spaniard Adri Arnaus for the lowest round of the day.

With Soderberg and Senior, who was two shots behind after round two, unable to catch the Spaniard, Cuartero Blanco could not have asked for a better third round as he aims to push on for glory tomorrow.

“When I imagine moving day, that’s how I imagine it. I started really hot. I made eleven putts on the front nine, five under, that’s what I call perfection on moving day on the front nine,” he said. “Even though I had a bogey on 11 I bounced back with an eagle and then a birdie on 16, so it was a solid day.

“I’ll be nervous tomorrow because I was not expecting to lead. I thought seven under was very good, so I’ll have to call on that knowledge from today. I could shoot a good round tomorrow but still not win, so I won’t leave anything out there.

“I will be placing the ball on the fairway and on the green, and then be aggressive with the putter. That’s been my strategy since day one and that will be my strategy tomorrow.”

After opening rounds of 64-67, Soderberg could not maintain control in Italy as he carded a level par round of 71 to sit one behind after Day Three. While Senior joined the Swede on 11 under par with his round of 69, two-under-par, to back-up yesterday’s round of 67.

Elsewhere Mark Flindt Haastrup and Victor Perez joined Arnaus for a share of fourth after rounds of 66 and 68, respectively. The Spaniard shot a bogey-free seven-under-par round before he was joined by the pair later in the day. The trio are two shots behind Cuartero Blanco and still in contention ahead of the final day.