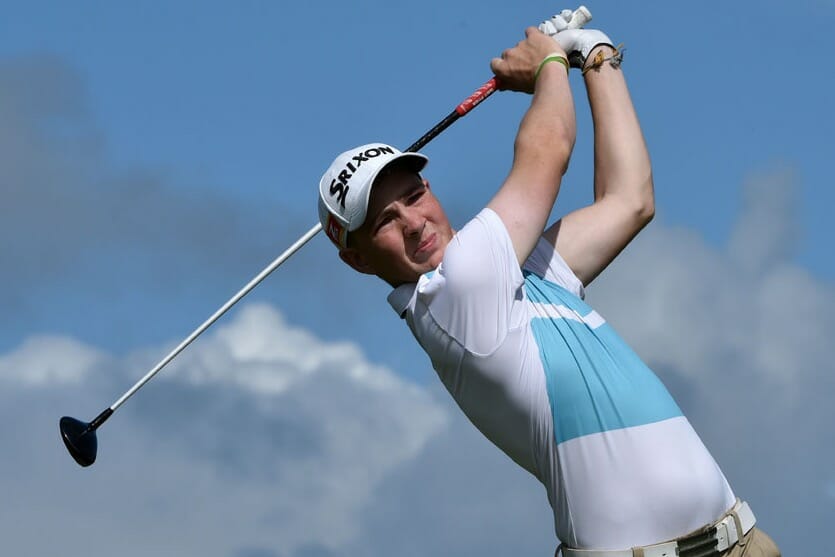 Luke Donnelly proved to be the lone Irish survivor as the HotelPlanner.com PGA EuroPro Tour’s Clipper Logistics Championship enters its final round.

The Mount Juliet professional fired six birdies on his way to a two-under 69 to sit in a share of 12th spot on five-under-par. That’s five shots back from Scot Craig Ross and England’s Josh Hilleard who lead by three at the top.

The cut of the leading 50 players and ties fell at two-under-par and unfortunately that was one too many for The Royal Dublin’s Niall Kearney and West Cliff’s Brendan McCarroll who finished agonizingly short of the mark on minus one.

It looks set for a dual between Craig Ross and Josh Hilleard who head into the final round of as joint leaders and three clear of the remainder of the field with second rounds of 64 (-7) and 65 (-6) respectively, at Moor Allerton Golf Club.

Ross (Kirkhill Golf Club) was the first of the leading duo in the clubhouse, carding the joint lowest round of the tournament on day two, picking up just a single bogey and eight birdies en route to a superb overall score of 10-under par.

A winner at Mar Hall as an amateur in 2014, Ross is yet to taste victory on the EuroPro Tour as a professional but said confidence will be high heading into the final round. “I played really solid today, I hit a couple really close early on which gave me a lot of confidence heading into the rest of my round.”

It wasn’t plain sailing for Ross who opened his round with a bogey on the 10th. He said: “I picked the wrong club on the tee today, I went for driver when I should have gone for something less. I’d just started so I knew there was a long way to go and didn’t let that hole affect me.”

He added: “A win this week would me a lot to me, it would get me that bit further up the Order of Merit and with a great chance to get into the top five for the Challenge Tour spots for the 2019 season.”

Hilleard (Farrington Park) secured his place at the top of the pack with Ross in stunning style, grabbing a crucial eagle on the 18th, a superb response to the back-to-back bogeys his picked up on the 15thand 16th holes.

A rookie on the EuroPro Tour, Hilleard has had reasonable success on the Tour since turning pro, making the cuts at all three of his previous events in 2018 including a top 10 finish at Montrose Golf Links.

Reflecting on his performance he said: “I played really nice today, I’ve struggled a bit before this week so I’m pleased to see things coming together quicker than I’d have expected. I’ve worked really hard back home with coaches to get my game to this level; my iron play was as good as it could get today.”

He added: “I had four wins in 22 days as an amateur in 2016, so I’m going to have to try and remember what that success felt like heading into tomorrow. You’re not going to be at the top of the leaderboard every week so it’s important that I make the most of the opportunity tomorrow.”

Three golfers in the form of Jimmy Mullen, Daniel Gavins, and Mark Young sit three shots back and tied for third with Young vying for his third win on Tour this year, one which would be his third consecutive victory.