McIlroy adamant he’s not losing sleep about his Major tally 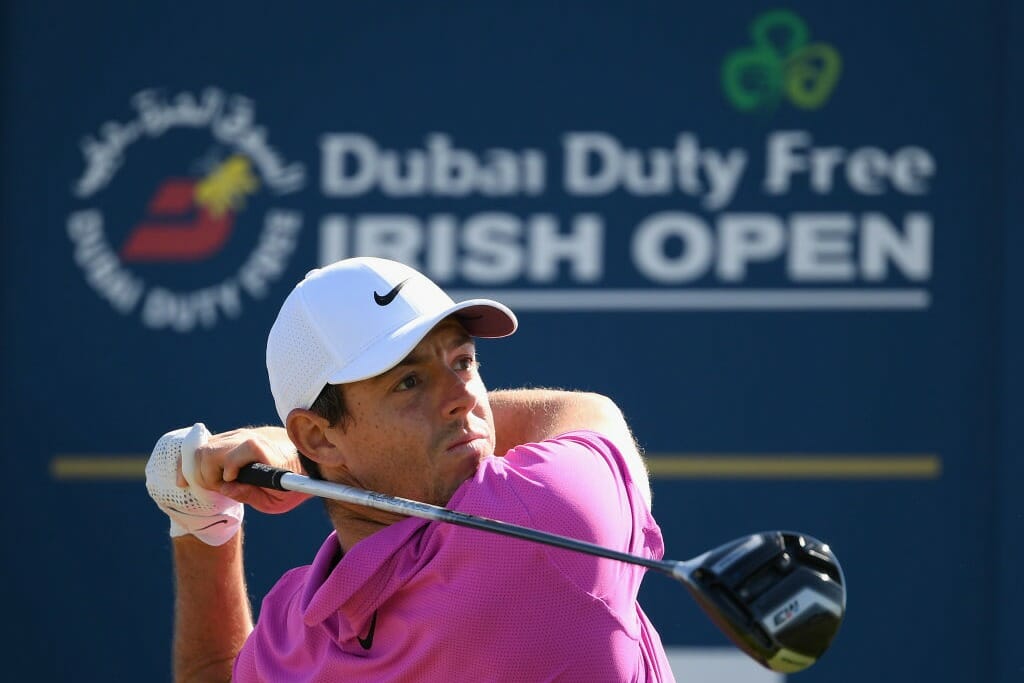 McIlroy is hosting this year’s event for a final occasion ahead of turning over the championship organisation reins to Paul McGinley who’ll host next year’s event at Lahinch.
But with just two weeks to the year’s third Major, and on what will be the fourth anniversary of his last Major triumph at the 2014 Open, McIlroy was fending off suggestions of being ‘stressed out’ in being unable to move from a group of 29 players to have won four or more Majors to 19 golfers to win five or more.

“Look, if I didn’t win another major for the rest of my career, nothing is going to change in my life whether I win one or not, but obviously I don’t feel like I’ll have fulfilled my potential,” he said.
“But at the same time, you know, there’s other things in my life that are more important than golf.

“Look, I’d be disappointed but again, it’s not going to change things. I don’t panic. It doesn’t keep me up at night. But yeah, look, I just need to give myself chances.
“I was proud of myself just to get into the final group at the Masters this year. I didn’t have a good Sunday. But I would have needed something pretty special to beat Patrick (Reed), anyway.

“The U.S. Open was the U.S. Open but then I’ve got two more chances this year to hopefully play myself into contention. That was my goal. My goal this year, it wasn’t to win majors. It was just to give myself a chance and to put myself in positions to see how I fair. I did that at Augusta.
“I felt like I learned a bit from it and then hopefully going into Carnoustie and Bellerive, I can put myself in similar positions.”

There’s no denying McIlroy is far-and-away one of the more honest elite sportspersons on the globe and it prompted the golfer, who will play the opening two Ballyliffin rounds in the company of Matthew Fitzpatrick and Thorbjorn Olesen, to be asked what has changed in his life.
“I’ve always had other interests and I’ve always had things that have been a big part of my life and yes, getting married and thinking about the future and what that entails, that’s huge,” he said.
“I think as you get older and as you evolve as a person, you change and your perspective on things changes a little bit. It’s not just the golf nowadays. There’s a lot more that goes into it.

“It’s still my career and I still want to make the most of it and I still feel like I have a lot of time left to make my mark on golf but at the same time, as I said, it doesn’t keep me up at night thinking if I never win another major, I can’t live with myself, you know.”

There is no single undermining aspect in McIlroy’s favour this and that is the overwhelming crowd support he will enjoy.
The crowds two years at the K. Club proved inspirational, as was evident in McIlroy’s penultimate shot that would win the European Tour’s ‘2016 Shot of the Year’, and he’s looking for more of the same in Co. Donegal.

“The Irish crowds are just fantastic. Even just in the Pro-Am today, the amount of people that came out today to watch us and put their lives in danger in a Pro-Am; there was a couple of close calls,” he said.

“They love their golf. And this part of the tournament, as well, they haven’t had a big championship or big event for a long time.
“It’s great that it’s so well supported. No matter where we have this event in the country, it’s always been well supported, and I think you go up-and-down the range, all the players will tell you the same thing. So,they are very inspirational.”

As for the golf course?
“Fantastic. I haven’t played here in 12 years,” he said.
“I’d sort of forgotten how good it was and how beautiful the area was. It’s a great golf course. Pat Ruddy designed it, and he designed the European Club down in Wicklow, as well, and I’m a big fan of that.

“It’s a tough track. You can’t put it in the bunkers off the tee. They really are penal. You have to hit fairways. The greens are getting firm. It’s getting bouncy out there.
“It’s going to be a really good test this week. The sun I think is going to shine for the next four days, as well. It will only get firmer. That’s the way a links should play, and I think everyone’s looking forward to that.”

McIlroy tees off today at 13:20 with Matthew Fitzpatrick & Thorbjørn Olesen