Dynamic duo of Moynihan and Dunne claim GolfSixes in style 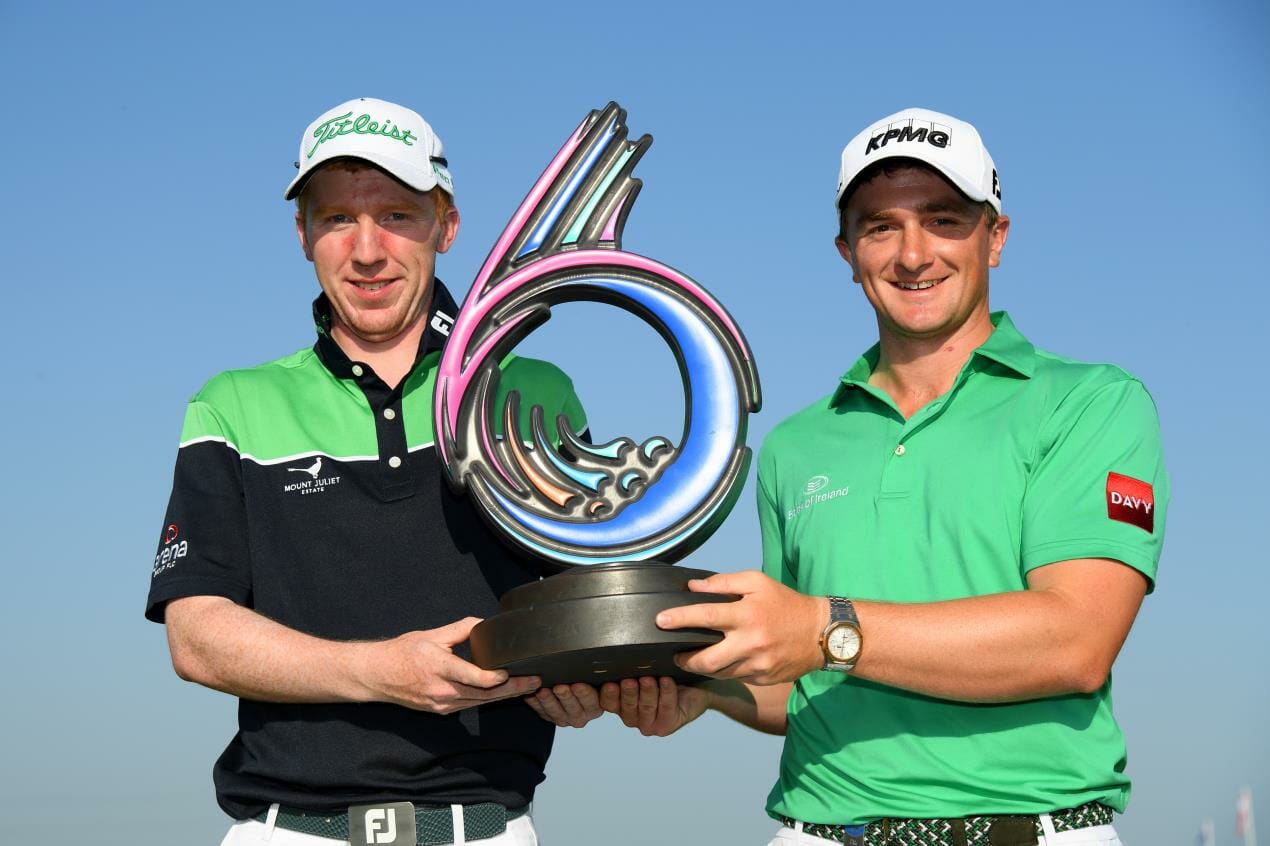 The Team Ireland combo of Paul Dunne and Gavin Moynihan have won the second edition of GolfSixes as they defeated Team France 2-0 in the final match of the innovative six-hole event at Centurion Club.

The St Albans venue was bathed in glorious sunshine over the weekend as over 10,000 fans – more than double the 2017 figure –  saw the European Tour break new ground once again as women’s and mixed sides joined the 16 team field, with the England Women and European Women’s teams both making it through to Sunday’s knock-out stages.
Ireland met the England women’s pair of Georgia Hall and Charley Hull in the quarter-finals, defeating them 2-0 and then secured their place against France in the final after defeating South Korea in a sudden-death play-off, with Moynihan chipping in from off the green after the teams finished their semi-final 1-1.

Ireland were birdie or better on 12 of the 17 holes they played on Sunday after finishing top of Group C. In fact, the only match Dunne and Moynihan lost all week was to the French team of Mike-Lorenzo Vera and Romain Wattel in Saturday’s group stage.
The pair – who played together in the victorious 2015 Walker Cup team –  started quickly in the final, winning the first and third holes to forge an early 2-0 lead which the French were unable to pull back.
“Apart from the group match against France, I think we were three‑under or better in every match through six holes,” noted a delighted Dunne post-round. “We just played really solid all week.

“Gavin was hitting some amazing iron shots, and obviously the pivotal moment for us was him chipping in on the playoff against the South Koreans.  But I’m not surprised, anybody who knows Gavin through amateur golf knows he chips in at least once a round. He was due one!
“It’s a fun event but as I said before, when we have the tricolour beside your name, it becomes a little bit more serious.  So we’re happy to represent Ireland well, have a nice trophy under the belt, and kind of sets well to kick on for the rest of the season.”
Dunne claims his second victory on English soil in the last seven months, after winning the British Masters in October, while it’s Moynihan’s first victory since joining the European Tour in 2016.
For the Dubliner, it’s a massive boost considering he’s missed eight out of eight cuts since earning his main tour card off the back of a great season on the Challenge Tour last year.

With Guinness in hand and glasses clinked, he looked a player reborn alongside his long-time friend Dunne, and with the pair picking up a €100,000 cheque each for their efforts, Moynihan in particular will be hoping to kick on from here with some financial security alleviating the pressures of professional golf.
“We know each other’s games so well and we’re comfortable with each other”, reflected Gavin. “So, coming in, we had kind of had a game plan coming in and the course set up well for us, I think.  We had fun. Honestly it was the best fun I’ve had on the golf course since I’ve turned pro. It was honestly a great few days.”
From all of us here at IGM we couldn’t be any more proud lads and let’s hope this win serves as the springboard to even better things to come this season.