What odds would Paul Dunne have been at the start of the Houston Open to now be just two shots from a what would be a remarkable inaugural PGA Tour success and a marvellous maiden Masters invitation?

Dunne continues to impress, competing for a first time in the Lone Star State and heading into the final round of the Houston Open having posted a third round 69 to move to four-way share of third place on 12-under par at the Golf Club of Houston.

England’s Ian Poulter, desperately intent on making amends for last week’s Masters World Ranking mix-up, added a day three 65 to move to 14-under par before being joined by Texas resident, Beau Hossler who birdied his final hole in a round of 69.

Dunne shares 12-under par with Australia’s Greg Chambers (65), Argentina’s Emiliano Grillo (67) and American Kevin Tway (69) and amazingly, the leading six players are not exempt into the Masters.

However, looming large in the final round picture at 11-under par are two players already qualified for the Masters and they are Sweden’s Henrik Stenson and American Matt Kuchar who signed for 69s.

And let’s not discount triple Major winning Jordan Spieth who, despite a third day 71, cannot be discounted at 10-under par.

Dunne got off to a decent start with two birdies in his opening four holes but he stalled for seven holes before a bogey ‘5’ at the 12th hole before bouncing back in holing a four-footer for birdie on the 13th ahead of a superb tee-shot into the par-3 14th and then delighting in seeing his 13-foot birdie putt drop to move him to 12-under.

The Greystones golfer then parred his closing four holes.

“I haven’t had a round really where I felt like I holed the putts where I needed to,” said Dunne.

“Maybe the first round I holed a few nice ones, but even then I missed a couple inside 10 feet. On these greens there’s no excuse for it really.

Today there were a lot of chances I left out there and I got off to a nice start, but then I was very sluggish for like eight or nine holes and I was surprised to see myself so close to the top of the leaderboard still.”

“So, it was nice to pick up a couple coming in and give myself a chance tomorrow.”

And while disappointed somewhat with his putting, Dunne is quietly-confident he can get the task done on Easter Sunday.

“You know, with the wind direction the way it is, it gives you a few chances in the first eight holes to get under par, get a few under. I haven’t played the stretch of 10, 11, 12 very well but there are chances to pick up some shots,” he said.

“There’s just certain holes that you know on the tee when they’re playing into the wind that you’re just happy to get away with a par and then take your chances on other holes.”

“With the greens being as good as they are, if you just give yourself putts inside 30 feet, you’ll have chances all day, you’ll make a few of them.”

Shane Lowry fought back from bogeys at his 4th and 9th holes to birdie three of his closing four holes, none better than his 13-footer from behind the flag at the last in his score of 71 that handed him a share of 17th place at nine-under par.

Lowry trails five shots off the lead and while victory would be the stuff of back-page headlines, he is booked to cross ‘The Pond’ next Friday to attend the wedding of close friends and with his wife, Wendy to act as bridesmaid.

Seamus Power produced a horror end to his third day’s play ending bogey, double-bogey, par, birdie and bogey in a score of 74 to slip well down the board in a share of 70th place.

And a day three 79 put paid to Padraig Harrington’s tournament in being cut post the third round with a three-over total. 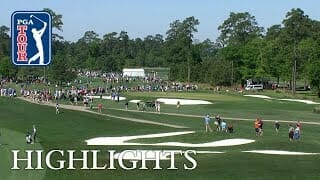