In total, grants worth €130,000 have been allocated to 12 emerging professionals with Gavin Moynihan and Stephanie Meadow receiving the largest individual grants of €20,000 each. Additionally, 32 starts on the European Challenge Tour have been secured with 27 already allocated among eight players.

“It is incumbent on Team Ireland to focus on these young, talented players and our ambition is to help them progress on to the main professional tours,” said Des Smyth, Team Leader of Team Ireland Golf. “Playing on a professional tour is not cheap. We are trying to prepare these players to make the grade. It does not happen instantly. It takes a few years.”

Smyth led a fundraising drive during 2017 and the success of the first ever Team Ireland Golf Pro-Am, has resulted in a funding increase of €40,000. Team Ireland Golf was established in 1999 and with three new players joining the funding scheme in 2018, it brings to 100 the total number of players who have received support.

The three newcomers are John Ross Galbraith, Stuart Grehan and Conor O’Rourke. All three players turned professional in 2017 and will benefit from grants worth €6,000 each plus a minimum of four starts on the European Challenge Tour.

Through Sport NI’s investment in the Northern Ireland Open at Galgorm Castle (16-19 August) there are eight starts available for Team Ireland players at that event.

Brian Casey, Jack Hume, Gary Hurley and Neil O’Briain – recently crowned rookie of the year on the Sunshine Tour in South Africa – will also receive starts through Team Ireland in 2018. Hume did not take up his funding allocation last year so this marks his first season playing under the Team Ireland umbrella.

“From my understanding a lot of players just would not be able to continue without these grants,” said Smyth. “The grants are important because when you have some financial support it frees up more of your time to focus on your golf.”

As part of the Team Ireland support package, all golfers can avail of the practice facilities at the GUI’s National Golf Academy.

A coaching base has also been established at Quinta do Lago in Portugal through the work of Des Smyth. The resort’s facilities are now available to players during the winter months.

More than €3.625m has been provided to members of Team Ireland Golf during the last 19 years. Team Ireland Golf was established in 1999 to assist Irish golfers, both male and female, in the early stages of their professional careers on tour. Players such as Shane Lowry, Paul

Dunne and Michael Hoey have benefitted from grant support in the past.

Team Ireland Golf is funded by Sport Ireland and administered by the CGI. 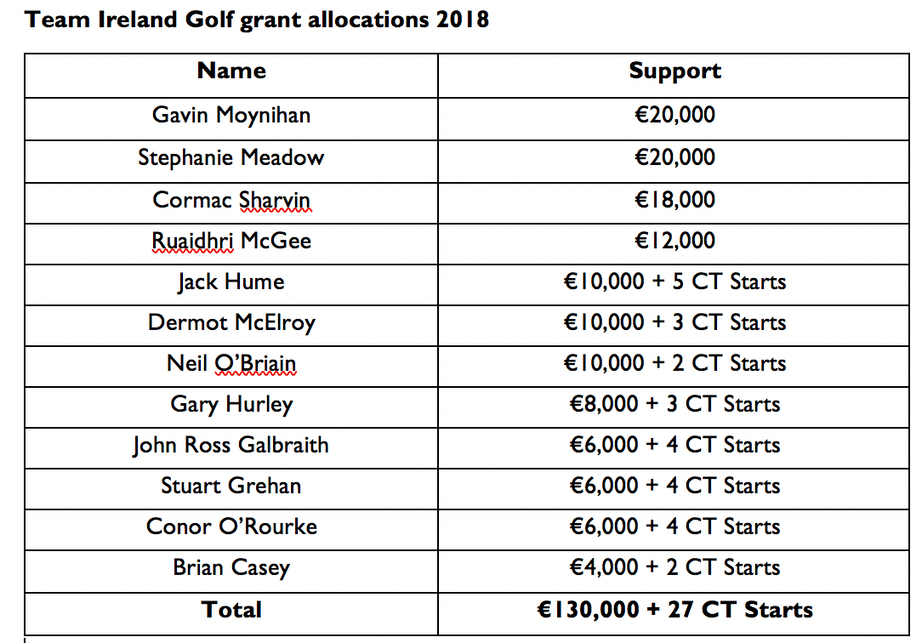