Has he got the Power? Seamus in contention on PGA Tour

West Waterford’s Seamus Power heads into the final round of the Corales Puntacana Resort & Club Championship just six shots off the lead as he eyes his best career finish on the PGA Tour.

Power returned a one-under-par 71 on moving day to rise into a tie for 5th at 10-under-par. His tied-10th finish at last year’s Canadian Open remains his best result to date on the main tour but surrounded by lesser knowns in a depleted PGA Tour field, hopefully Seamus can take full advantage.

He was steady if unremarkable yesterday in a round that included four birdies and three dropped shots, while he’s no stranger to stalking the leaders on Sunday either. Now though, with experience on his side this year, he’ll be looking to produce when it matters most – something that eluded the Olympian in his rookie season.
Two shots adrift of Power is Paul Dunne, who will be disappointed with his sloppy finish over the closing holes yesterday.
Trying to take full advantage of a sponsor’s invite, the Greystones man was 10-under-par on the 14th tee but bogeyed the par-5 along with the par-3 17th in a round of 71, good enough for a share of 15th spot overall.
With the golfing world’s attention firmly fixed on the WGC Dell Technologies Match Play this week, it’s Brice Garnett who’s coping best in the spotlight’s absence at Punta Cana.

The 34-year-old shot a 3-under-par 69 on Saturday and holds a two-shot lead ahead of tonight’s final round. Although he’s never won on Tour, he won twice a year ago on the Web.com Tour and he’ll be hoping the finish line comes just as easy in better company.
For the second time in as many tournaments, Corey Conners will be in the final group on Sunday at a PGA TOUR event.
Canadian Conners, 26, who led after each round at the Valspar Championship in Tampa, Florida two weeks ago before dropping back Sunday, has got himself in prime position once more.
After a 5-under-par 67 on Saturday, Conners sits at 14-under par at the Corales Puntacana Resort & Club Championship and is just two shots back of the lead
He’ll be paired with Garnett and Tyler McCumber, son of 10-time PGA Tour winner Mark, for Sunday’s finale in the Domincan Republic
Conners and Garnett were actually paired together at Web.com Tour Q-School in 2016. They both earned status that week for the Web.com Tour’s season in 2017. For those on mini-tours around the world, take note. Pay your dues and good things happen. 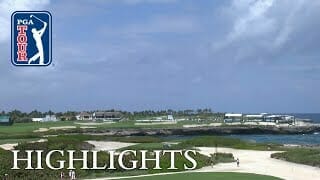