Rory McIlroy heads to today’s final round looking for triple treat after celebrating both St. Patrick’s Day and Ireland capturing the 6-Nations Grand Slam crown with a lowest PGA Tour score this season to now put himself well in contention for victory in Arnold Palmer Invitational.

The World No. 13, who tees off just after 10pm tonight Irish time, grabbed the luck of the Irish with two birdies over his closing three holes and signing for a five-under par 67 to muscle his way to third place at 10-under par and just two shots from the lead on the famed Bay Hill course in suburban Orlando.

Fellow Open Champion Henrik Stenson continues to the head the $8.9m event with four birdies but also three bogeys in his one-under par 71 to move to 12-under par and one shot clear of American Bryson DeChambeau who carded a level par 72.

While the 41-year old Stenson looks to make it three PGA Tour victories in a row for the over-40 brigade, and also what would a seventh PGA Tour counting success, McIlroy is desperate to capture a first victory anywhere since winning the 2016 PGA Tour season-ending Tour Championship and on the same day (25th September, 2016) that Arnold Palmer passed away.
“I’m happy as I started the day just outside the top-10 and wanted to at least give myself a chance going into tomorrow, so it was a great day out there,” said McIlroy.
“I can’t really ask for much more. I got it up-and-down when I needed to, I took advantage of some of the good shots I hit. I don’t know how far behind I’m going to be going into tomorrow, but I’ll hopefully be within two or three of the lead and I can make a run at it.”

McIlroy capped his lowest round by three shots in 15 PGA Tour rounds this New Year with an eagle ‘3’ at the par-5 hitting a 236-yard second shot that carried two bunkers and missed a third left of the green to roll-up to just seven feet pin-high left of the flag from where the 28-year old holed the putt and much to the delight of a huge following.
And it was not lost on McIlroy it was St. Patrick’s Day and with him heading to the tee buoyed by Ireland’s 24-15 Six Nations thumping of England at Twickerham.
Though with one round still to play McIlroy will be looking for a Sunday night celebration if successful in capturing what would be a 14th PGA Tour triumph and a 23rd worldwide pro career success.
“I will not celebrate tonight even though Ireland just won the Grand Slam in rugby,” he said.

“But one thing is certain, Dublin’s going to be — I would have loved to have been in Dublin tonight.
“As for celebrating St. Patrick’s Day Americans definitely take it to another level when it comes to St Patrick’s day over here.”

But then McIlroy’s ‘celebration’ was somewhat soured with one clearly intoxicated fan really looking to make himself unpopular.
And the incident, and the not the first at PGA Tour events this year, has prompted McIlroy to call on the PGA Tour to limit the sale of alcohol at events.
“There was one guy out there who kept yelling my wife’s name, I was going to go over and have a chat with him,” said McIlroy.
“But, yeah, I don’t know, I think it’s gotten a little much, to be honest. I think that they need to limit the alcohol sales on the course, or they need to do something, because every week it seems like guys are complaining about it more and more.

“I know that people want to come and enjoy themselves and whatever, and I’m all for that, but it’s, sometimes when the comments get personal and people get a little bit rowdy it can get a little much. I don’t know, it used to be like you bring beers on to the course or buy beers, but not liquor.
“And now it seems like everyone’s walking around with a cocktail or whatever. So I don’t know whether it’s just go back to letting people walk around with beers in their hand, that’s fine, but, I don’t know.”

In the bigger picture, victory would just be the tonic the now 28-year needs to take with him to the year’s first Major starting on April 5th at Augusta National.
On three times in his now 10-year pro career has McIlroy won before heading into the Masters and that being in 2009 (Dubai Desert Classic), 2012 (Honda Classic) and 2015 (Dubai Desert Classic).

And Justin Rose cannot be ruled out of capturing a ninth PGA Tour win after posting a third day 67 that included five birdies over his opening 13 holes to be just one shot behind McIlroy on nine-under par.
Eight-time for event winner Tiger Woods finished birdie, bogey and birdie in a score of 69 to be sharing 10th place on seven-under par.
“I played well, scored well, it was a good day all around. so I can’t complain about anything I did today,” said Woods.
“I really hit the ball solidly, I controlled it, and I hit a lot of beautiful putts, some went in, some didn’t.”

Today’s round will be last before Woods returns to Augusta National and with his golf clubs for a first occasion since 2015. 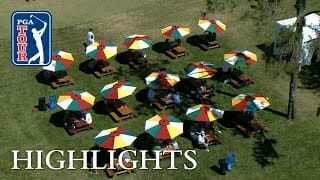