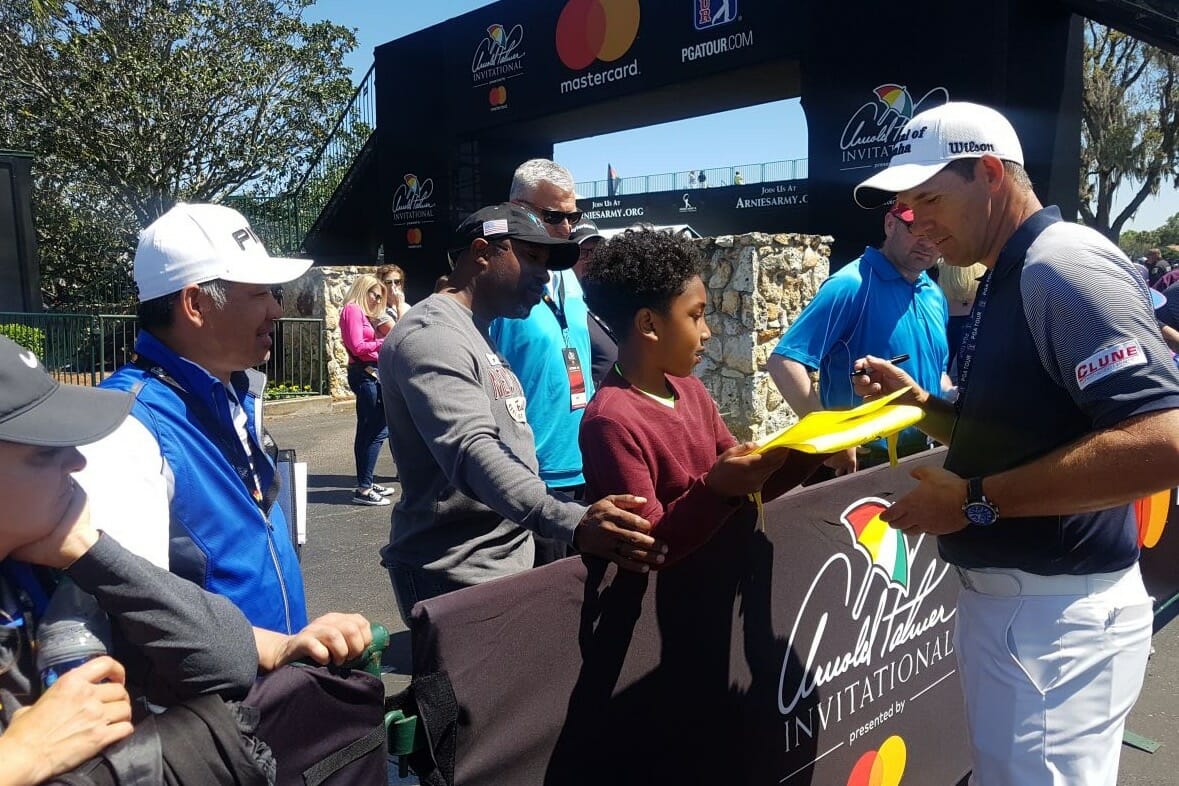 Harrington proceeded to land his second shot left into a greenside bunker, with his ball lying like a ‘fried egg’ but on the downslope of the bunker. He surveyed his third shot including walking across the green to see what lay between the putting surface and water guarding the right side of the green before picking a target that would see his ball land within 20-feet of the flag.

He splashed out to 17-feet but sent his par putt by the hole for a bogey and a round of 71.

“My ball was lying like a fried egg and on a downslope but with the fried egg going the wrong way,” he said.

“It would have been a miracle shot to get it any closer which I was thinking about but it would have left me in the bunker. The plugged lie was going in the wrong direction, so disappointing, of course to end with a bogey given I had a wedge in my hand for my second shot.”

“Overall, there were a lot of birdies on my card and a 71 is a good building block.”

‘G Mac’ was even par after six holes thanks to a birdie but also a bogey and then capped his round at the par-5 15th he was playing as his sixth and sending a 179-yard second shot to four-feet and holing the eagle ‘3’ putt.

But it was then nine straight pars before a three-foot birdie at the eighth or his 17th hole that would hand him a 69 and see him tied with the likes of European No. 1 Tommy Fleetwood and Justin Rose.

“It’s been a golf course that’s been good to me in the past,” said McDowell. “My sort of history here’s been a little up-and-down. I’ve had a couple of seconds and a lot of missed cuts. But when I do play well here, I play well. And like you say, home game, which I’m not sure if I get more sleep or less sleep when the kids are in the house at a home game.”

“No, it’s great to be home, lots of family and friends here this week. And this is a golf course I like. Second year without Mr. Palmer here and great to see such a good field and the golf course in the type of shape it’s in.”

McDowell teed-up currently ranked a very out-of-character No. 214 in the world and desperately needing to return to the form that won him a U.S. Open and also saw him hole the 2010 European Ryder Cup winning putt.

Shane Lowry’s indifferent run since moving his family to Florida continues with the Offlay golfer posting a three-over par 75.

Lowry, who also began with a 75 and in his only other start in the 2015 event, was two-over on the 16th tee but then drove the green in two and holed five-foot putt for an eagle ‘3’.

But Lowry gave three shots back at the last in finding the same greenside bunker as Harrington but putting his third into the water guarding the right side of the green for a triple bogey ‘7’.