Paul Casey ended a nine-year PGA Tour drought in denying Tiger Wood by one shot with victory in the Valspar Championship.

Casey, who had played alongside Woods on day three and ended four shots adrift of Woods, snatched seven birdies in a closing 65 to win with a 10-under par tally on the Copperhead course.

The 40-year old Cheltenham-born Casey last won on the PGA Tour in capturing the 2009 Houston Open and in the intervening period has contested 151 Tour events before a second success on Florida’s west coast.

Casey later dedicated the win to a close family friend and he is skipping this week’s Arnold Palmer Invitational to return home to England for the funeral.

“Tiger has made winning look easy for such a long time and it’s not . While I have won a few times in Europe, to win just my second PGA Tour victory is emotional,” said Casey.

“It’s emotional as I have worked so hard for it, and the biggest thing was I lost a friend on Saturday when I was playing last week in Mexico so I played with a heavy heart and maybe that was the difference.”

Woods, after draining a monster 43-foot birdie putt on 17, needed to birdie the last to force a play-off with Casey but missed his 38-footer in a round of 70 to share second place on nine-under with Patrick Reed (68).

Woods’ effort of a final day 70 continues to defy the doubters and just adds further bite in his goal to claim a first victory in nearly five years.

“I felt very comfortable out there today though I didn’t feel that sharp with my iron game and I had to play very conservatively into the greens as I wasn’t as sharp as I was yesterday,” he said.

“It was just one of those day where I just kept getting a half-club and not quite getting the full club. Then standing over my putt on 17 I thought to myself to just get the right speed and if I hit it it would go in losing pace even though it took forever to drop.”

Ireland’s Graeme McDowell claimed a T40 position following his level par final round which left him level par for the tournament while Shane Lowry finished on +2 in T49 after a one over par round on Sunday which included two birdies and two bogeys in what proved difficult scoring conditions.

Woods now heads to Thursday’s starting Arnold Palmer Invitational as favourite in an event he’s won on eight occasions including back-to-back success in 2012 and 2013. 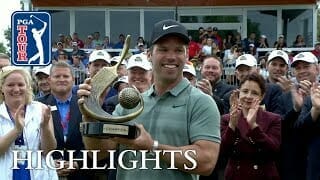