Dunne drops back as Sharma pulls clear in Mexico

Paul Dunne’s early season ambitions have been scuppered after a one-over-par round of 72 left him in 58th place with a round to go at the WGC – Mexico Championship.

Needing a solo second finish at worst to qualify for the Masters in April at the start of the week, or a top-4 finish to get him into the lucrative WGC-Dell Technologies Championship in Texas later this month, those targets are now a distant dream for the Greystones golfer.
Yet there’s still much to play for this week, not least a chunk of the $10 million purse at the event or the considerable amount of world ranking points on offer.

He would’ve been hoping for much more of course but he’s been unusually erratic in his work. His shot tracker for his 10th hole last night, 230 yards off the tee to unknown told the whole story.
Having got himself to one-under through his first nine holes that included a rollercoaster four birdies and three dropped shots, Dunne lost one right at the start of his back nine and was forced to reload. It led to a double bogey six and though he bounced back with successive birdies at his 11th and 12th, two more dropped shots on the way in left a sour taste in his mouth at dinner.
It was the same old story today for Dunne. Just seven fairways hit, fourteen in total since Thursday’s first round and it’s rendered the tight Chapultepec layout almost unplayable for Paul. He’ll be hoping for a much better return tonight.

Shubhankar Sharma will take a two shot lead into the final round after maintaining his advantage on day three at Chapultepec Golf Club.
England’s Tyrrell Hatton shot a blistering 64 to move into a share of second, alongside American Phil Mickelson and Spanish pair Sergio Garcia and Rafa Cabrera Bello.
Sharma has enjoyed a remarkable rise in recent months, winning the Joburg Open in December and last month’s Maybank Championship to top the Race to Dubai Rankings presented by Rolex.
The 21 year old from India now becomes the youngest player to lead after 54 holes of a World Golf Championships event after a third round 69 left him 13 under par on his WGC debut.

Making his World Golf Championship debut this week, Sharma has been hugely impressive and will now face the biggest test of his young career as he looks to hold off a truly world class chasing pack led by Cabrera Bello, Garcia, Hatton and Mickelson.
“Obviously a dream come true for me to be playing in this tournament and obviously leading after two days, that’s just fantastic,” said the ecstatic Indian. “Really happy with the way I played today, stuck in there.  Obviously made a few mistakes on the greens but the greens are tough this week so I think everyone’s making a few mistakes.  So I wasn’t too hard on myself.  Very, very happy that I could grind out a par on the last hole.
“Tomorrow will be a lot of fun. Obviously Phil is a legend in the game of golf and I’ve seen him on TV for as many years as I can remember.  You know, I met him for the first time today and it’s great that I’m paired with him tomorrow.  It will be a lot of fun.”
It will be a lot of fun for Mickelson too who has enjoyed a resurgence of form, mainly due to some heroics with the putter of late and he’s fully expecting to crack the winner’s circle once more very soon.

“It’s been a long time since my game’s been back to this point,” said Mickelson. “I’m back playing some of my best golf again.  It will start to click and get better and better as the year goes on.  My swing is back on plane. It’s starting to come together.  I think whether it happens tomorrow or not, very good chance it will, but if it doesn’t, it’s going to happen soon because I’m playing too well for it not to.”
World Number One Dustin Johnson, Brian Harman , Pat Perez and Xander Shauffele are three shots off the pace on ten under, with the in-form Justin Thomas just a shot further back after a brilliant, course-record setting nine under par 62. 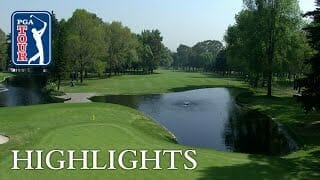