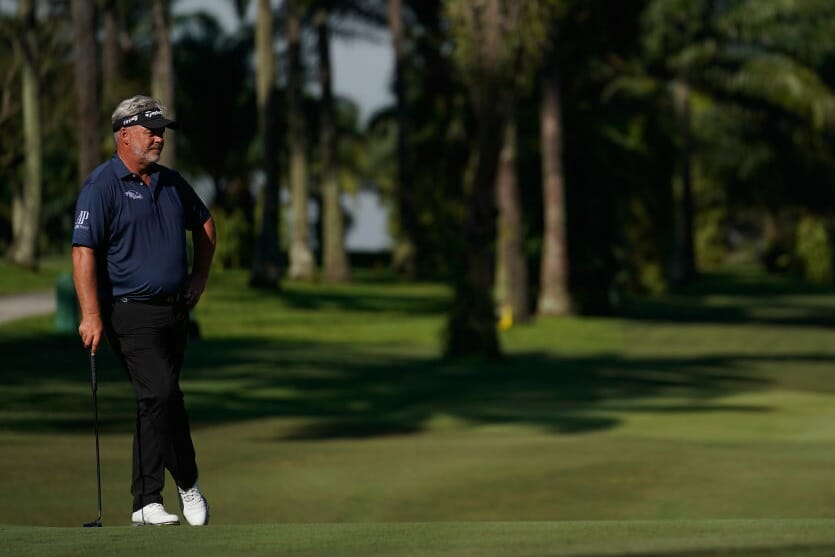 Darren Clarke carded a final round of three-over-par 75 to bring an end to a miserable weekend at the NBO Oman Open.

The Northern Irishman, who had fired a bogey-free 67 to coast inside the cut mark on Friday, suffered a third round collapse yesterday in a disastrous 78 at Al Mouj Golf in Muscat.

And today wasn’t much better with Clarke as he carded six bogeys overall and just the three birdies to drop another four places into a tie for 61st on plus four for the tournament.

He will pick up a consolation cheque worth € 3,709 for his efforts but will be left to wonder why when everyone else seems to make progress on moving day, he goes in reverse.

There’ll be no such worries for Joost Luiten, who claimed his sixth European Tour title at the inaugural event, putting all of his winning experience to good use as a flawless back nine lifted him to a two-stroke victory over his close friend, Chris Wood of England.

It was a thrilling day at the sun-kissed Al Mouj Golf on the outskirts of the Omani capital Muscat, as joint overnight leader Luiten stormed into a three-stroke outright lead courtesy of a trio of consecutive birdies from the second, before he stumbled with back-to-back bogeys on the seventh and eighth holes.

That meant he and Wood – who was playing in the penultimate group – were tied heading into the back nine. Although they both picked up shots at the 12th, Luiten followed up with another birdie at the 13th to move one clear.

Wood briefly regained a share of the lead with a birdie at the 16th, but a dropped shot for the Bristolian at the 17th, paired with a birdie at 16 from Luiten, meant a bogey on the last would have been enough for the Dutchman.

A nerveless par earned the 32 year old a four under final round 68, a two-shot victory on 16 under par and a much sought-after spot in the forthcoming WGC-Mexico Championship as he moved from 60th to ninth position in the Race to Dubai.

“I’m feeling great”, said the delighted champion. “This is why you play golf, to hold trophies. It’s been a great week. It’s always tough to win out here, all these guys are so good and they’ll keep putting pressure on you, so you’ve got to keep playing good golf.

“Down the stretch I hit some nice shots and holed some nice putts and it was a nice battle with my friend Woody. I dropped a couple of silly ones on the front nine – on seven and eight. I thought ‘just create chances and hopefully the putter will get hot.

“I hit a good five iron into 12 on the par five to set up a real easy birdie and then a good nine iron on the next to make another birdie. That got me right back in it and then you’re in the zone. Another great putt on 16 to basically close the door on a couple of the guys. I thought if I could just give myself a putt at it and see what happens. I think I played that hole smart in the end.

“I need to win another couple I think to get into The Ryder Cup team, but it’s a great start to the year for me, this is what I was hoping for. This is what gets you right in there. I just need to play golf and then we’ll see what happens come September.

“I didn’t know what to expect when I came here but to play a course like this which is in great condition, it’s a great technical golf course as well and it was beyond my expectation and to hold the trophy is even better.”

Wood, meanwhile, earned his best result since finishing joint runner-up in last June’s Nordea Masters as he claimed second spot on his own, while third-placed Julien Guerrier of France earned the biggest cheque of his 11-year professional career.