Lowry likens Phoenix 16th to being thrown to the lions

For a third year running Shane Lowry reckons there’ll be nowhere to hide when it comes to the infamous 16th hole at the Phoenix Open.
“It’s like being thrown to the lions,” said Lowry smiling.

The hole, nicknamed ‘The Coliseum’, is far and away the nosiest in golf with some 30,000 fans packed three stories high overlooking the entire length of the 163-yard par three on the ‘Stadium’ course.

Last year saw attendance records smashed for an event that was first played in 1932 with 655,434 fans walking through the turnstiles breaking a record of 618, 3654 set a year earlier when Lowry was tied sixth on his TPC Scottsdale debut. There was also a new third round record of 201,003.

The sad news is not all those walked of their own accord back through the gates with the great majority in attendance there to drink as much booze as they could.
There was also the sight last year of around a dozen local Phoenix Police conducting random breath testing of spectators as they walked from the TPC Scottsdale grounds.
“I played in the penultimate group on Saturday in 2016 and it was the craziest thing I have ever experienced in golf,” said Lowry.
“It’s really quite daunting emerging from the tunnel leading from the 15th and then emerging onto the tee.”

“The pressure is on you to hit a good shot because if you don’t the crowd will let you know in no uncertain terms that it wasn’t. So, it is a bit like being thrown to the lions, particularly given also that the hole is known as the Coliseum.”
“But it’s the sort of excitement golf needs and while some players don’t embrace it my advice if you don’t like the hole, don’t play the tournament. There is nothing like it in golf and while Saturday is absolutely crazy, Thursday and Friday are also pretty noisy.”

In that 2016 event, Lowry played the 16th in one under par with scores of birdie, par, bogey and a last day birdie on route to a share of sixth.
“I missed the green twice and got really booed on the Saturday taking bogey,” he said (smiling).”

A year ago, there were boos for Lowry on the final day when his tee shot at 16 was 35-yards right of the green and he then took three to get down for a bogey on route to a share of 16th place.
“I love it here. I love the whole atmosphere of the tournament and wouldn’t be here it I didn’t,” he added.
“I could not see the R&A building a stadium around the ‘Postage Stamp’ at Royal Troon but here in Phoenix, given how passionate the fans are, it works well.”
“It’s only one week of the year and there’s noise all about the course, not just at 16 that makes it just unbelievable”.

Lowry, who is the lone Irishman in the field, will tee-up at 7.20pm Irish time. 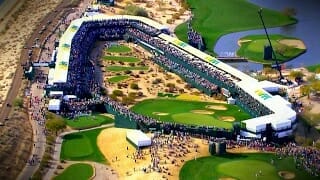