Lowry, Power and Harrington get cut at Torrey Pines

Padraig Harrington and his 2016 Olympic Games team-mate, Seamus Power were among 27 players on level par who were cut by one stroke from the $US 6.9m event.
Shane Lowry, who like Power, began day two well-placed at three-under par, produced a disastrous second day score of 78 for a three-over par tally.

Lowry’s second round of a new season was a terrible cocktail mix of a seventh hole birdie while he then proceeded to drop six shots over his next five holes taking bogey at his ninth, double bogey at his 10th hole, and where he first found a fairway bunker and then a greenside bunker and then needing four shots to get up-and-down from some 50-feet.
To compound his hurt, Lowry then bogeyed his 11th, 12th and 13th holes while he dropped a shot also a the 16th and in a round that was nine shots more than a day earlier.

Harrington’s return to competition since partnering his 14-year old son, Paddy at last month’s Father-and-Son event in Orlando, was a round he also would rather forget.
The triple Major winner, and teeing off the 10th hole, was two under par through five holes but the wheels came off big-time and making a complete mess of his ninth or the 18th hole in putting his third shot into the water on route to a double bogey ‘7’.
Harrington then played his inward half in one under with two birdies and a bogey.
Harrington, with a pair of 72s, also managed to hit just two of 14 fairways and one less than Tiger Woods.
Harrington and Lowry, along with their respective caddies and also Lowry’s manager, then spent the evening at the Isola Italian restaurant in nearby La Jolla no doubt wondering where it all went wrong.

Seamus Power, who also started day two at three under, was three over after six holes but while he birdied the long ninth and parred his way to the 17th on the North Course, he bogeyed the last hole and shot a three-over 75 to miss the cut by a shot on level par.
“I was in the rough off the tee with my drives on both 17 and 18, so that is something that really hurt me,” said Power.
“I have been struggling with my drive, as you know, for the past few weeks and that was the problem this week.”
Barring withdrawals, Power will now have a few weeks off as he is not exempt into either of the next three events – the Phoenix Open, the AT & T Pebble Beach Pro-Am or the following week’s Genesis Open. 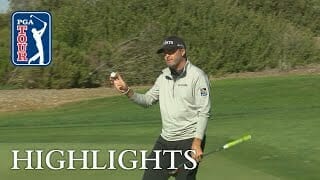