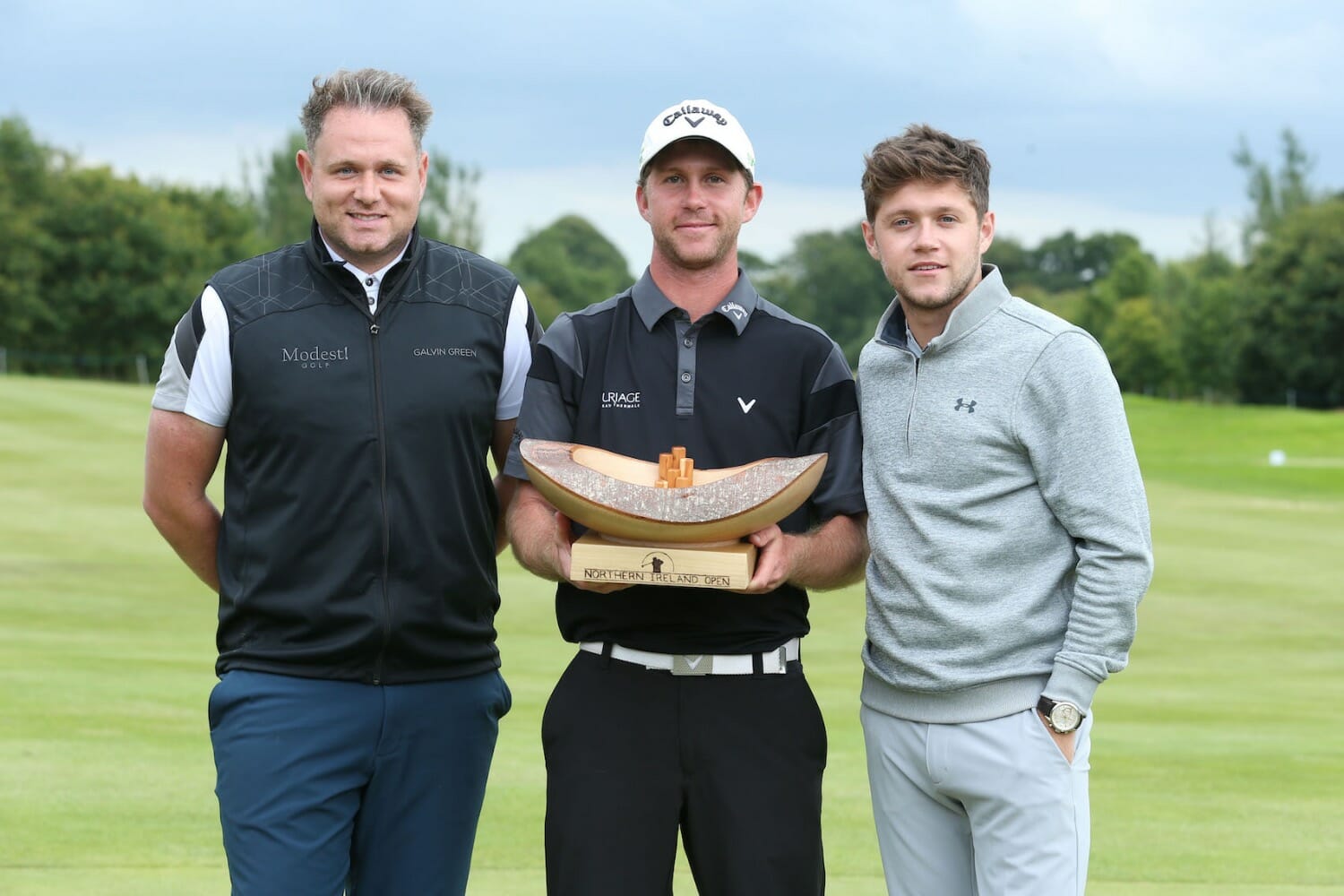 Niall Horan might be in the Emirates this week supporting his players and friend Rory McIlroy, but he has news of his own international golf tournament as Modest! Golf confirmed they are back on board for this year’s Northern Ireland Open at Galgorm Castle.

The NI Open has evolved into a global event since its inception as a European Tour Group event in 2013. Modest! Golf and Horan return for a third consecutive year and record crowds are expected once more when the European Challenge Tour’s most popular event takes place at the Ballymena venue from August 16-19.

Horan and fellow Modest! Golf Director Mark McDonnell are at the Emirates Golf Club in Dubai supporting their Modest! Golf players, Scotland’s Connor Syme and England’s Jack Singh Brar. They are in the Dubai Desert Classic field alongside the likes of McIlroy, who after an opening 65 is hoping to improve on his tied third finish in his season opener in Abu Dhabi last week.

“We are delighted to announce Modest! Golf’s return to the Northern Ireland Open for the third year. The event has grown every year and we look forward to linking up with Galgorm Castle and the Challenge Tour once again,” said Horan.

Over 43,000 spectators came through the gates at Galgorm Castle in 2017 to witness the drama unfold before Robin Sciot-Siegrist from France was crowned champion in the Shootout Sunday format. This year organisers have returned to the traditional 72-hole strokeplay format, which ties in with the long-term vision for future stagings of the NI Open.

“Last year Keith Pelley, European Tour Chief Executive, challenged all the major stakeholders in golf to do their bit to introduce golf to new audiences,” explained McDonnell. “We played our part in that by attracting the biggest ever crowd to a Challenge Tour event with the introduction of Shootout Sunday.

“Interest in the NI Open has never been higher and we are excited to return to the traditional four days strokeplay and look forward to welcoming new audiences to experience the best Challenge Tour event in the world.”

The NI Open continues to be a family friendly event and 2018 will be no different with plenty of activities and attractions to take place away from the fairways. The GolfNow Junior NI Open proved a big hit last year and will showcase the junior talent for a second time when played over the six-hole course at the Galgorm Castle’s Fun Golf Area.

The 2018 NI Open holds another key summer date on the international schedule. It is also a hugely important event for the development of Ireland’s professionals starting out in their career and looking to make their mark in the game.

“For years the NI Open has provided Irish players much-needed playing opportunities,” explains Gary Henry, Managing Director Galgorm Castle. “Irish professionals have the chance to compete on home soil against some of the best players in the world in one of the best events on the schedule. Just as important, this event alone opens so many doors to other events across Europe and beyond by way of reciprocal invites, which helps players put together a playing schedule for the season.”

The NI Open is an integral part of the work carried out by the Confederation of Golf in Ireland (CGI) and the Team Ireland Golf scheme that provides grants and funding to players in the early stages of their professional career.

“This Challenge Tour event is so important to us as a business,” added Horan. “Year on year, this tour develops the next generation of European Tour winners and Major champions and we can’t wait for the NI Open to play its part, both this year and in future years.

“We have lots of plans with Galgorm Castle to develop this event even further over the coming years.”

Tourism Ireland also plays a key role in the success of the NI Open, especially when promoting golf on the island of Ireland to an international audience.

Aubrey Irwin, Tourism Ireland, said: “The Northern Ireland Open is a wonderful event, giving us an opportunity to showcase our world-class golf courses to a huge number of golfing enthusiasts across the world.

“There is tremendous interest in this event, as part of the European Challenge Tour series, and Tourism Ireland estimates that highlights of the event will be broadcast to approximately 540 million homes, via Sky Sports and their 26 international broadcast partners, and through digital media.

“The 2018 Northern Ireland Open will once again shine a spotlight on golf here, helping us to highlight our superb parkland courses, which complement the world-class links for which Northern Ireland is known around the world.”

(The NI Open continues to be free to enter for all the family. To get your tickets for the 2018 event, simply register online at niopen.golf).