Dunne and McIlroy looking hot in the Dubai Desert

Both Rory McIlroy and Paul Dunne have made blistering starts to their Omega Dubai Desert Classic bids as the pair took advantage of perfect scoring conditions at Emirates Golf Club.

McIlroy fired seven birdies and even more encouragingly, no bogeys, on his way to a seven under par 65. Rory has become a desert specialist in his career to date, winning twice at this venue alone, and followed up a podium finish in Abu Dhabi last week to share a tie for 5th after day one in Dubai.

Having taken three months out from the game to recover from a rib injury that derailed his 2017 ambitions, McIlroy admits that he’s ahead of schedule in terms of the results he’s seeing but is understandably delighted with the quick progress nonetheless.
“I don’t think you could have got better conditions out there,” McIlroy told Sky Sports. “The greens in the morning are perfect and there wasn’t much wind for probably the first 12 or 13 holes. So you needed to take advantage of it today. Thankfully I was able to do that.
“I didn’t expect to play as well as I did last week and it’s been nice to continue that into this week. I’m ahead of schedule right now but I don’t mind that. That’s nice. I just have to reassess everything and go from there.

“I was excited about the process of trying to get better and trying to get my body better, my game better, so I was excited about that.
“But not being able to play to my best last year was something that I was very frustrated with.
“From then until now, it’s completely different. I’m really happy with where my body is, where my game is and this is just a progression of what I’ve seen over the past couple of months, which has been nice.”
One thing that he has worked on over the off-season is something he lacked in spades last year –coming out of the gate quickly and getting into contention from the start. Albeit just five rounds into the new season, the four-time Major Champion is already showing encouraging signs that his hard work through the winter is paying off. 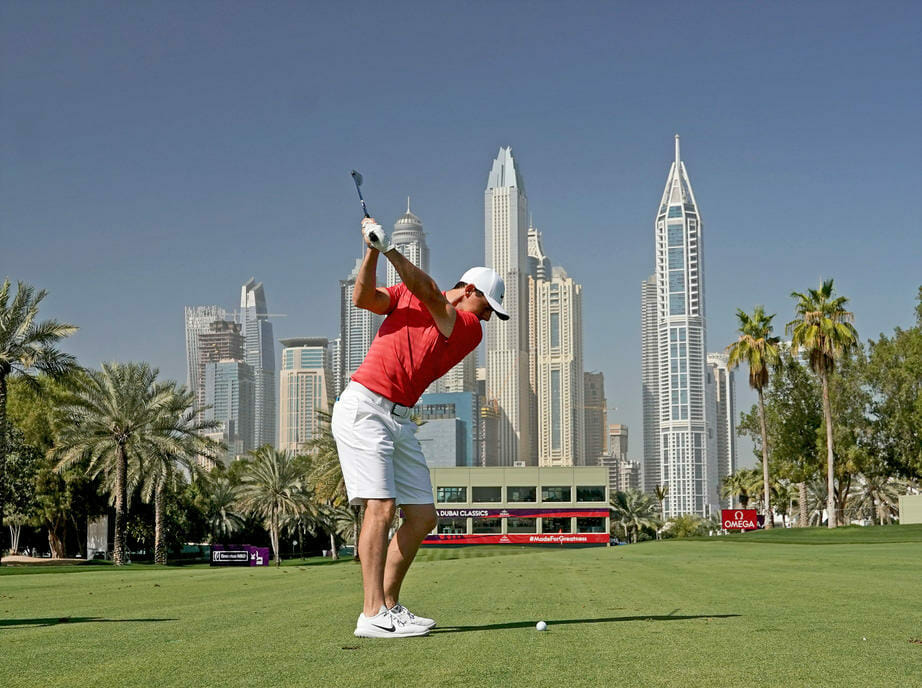 “That’s honestly one of my goals this year. I feel like started off last year a little bit sort of 71, 70 instead of getting right into the thick of things from the start. So it’s been nice to start the last couple of weeks like that.
“There’s so many chances out here that I knew if I got into a rhythm that some would fall. I feel like I left a few out there but the end of the day, 65, you’re not going to complain about that.”

Another man who won’t be complaining is Greystones favourite, Dunne who lies one shot behind Rory after a bogey free six under par 66.
Dunne played great guns for three rounds last week in Abu Dhabi but suffered dearly in a final day 74, ultimately claiming a share of 19th. Currently in a tie for 10th, the game seems to be coming easier than ever to Dunne following a breakthrough win at the British Master last year.
He opened with three birdies in his first four holes but the highlight of his round today was undoubtedly an eagle three at the par-5 18th, Paul draining a long putt from the back of the green to finish his round in style.
Dunne looks in supreme control of all facets of his game as he sets his sights on automatic qualification for the Europe’s Ryder Cup in September. Sundays like last week will prove an obstacle to that goal, but having followed his career closely to date, such off-days will be few and far between.
As sound as the Irish duo undeniably played, there was no match in the field for Jamie Donaldson who fired a brilliant round of 62 to take a one-shot lead into day two in Dubai.
The Welshman entered the Andalucia Valderrama Masters hosted by the Sergio Garcia Foundation last season in a battle to avoid burning his career earnings exemption to keep his card, but a fourth-place finish moved him to 99th in the Race to Dubai Rankings presented by Rolex.
And he looks to be making the most of that reprieve at Emirates Golf Club, carding an eagle and nine birdies before dropping a shot on the ninth – his last – to sit at ten under, a single stroke ahead of English duo David Horsey and Anthony Wall.

Another Englishman in Tyrrell Hatton sits at eight under with two-time winner McIlroy in the group a further shot back alongside Swede Alexander Björk, Dane Lasse Jensen, England’s Chris Paisley and Belgian Thomas Pieters.
Graeme McDowell opened with a disappointing level par effort while Darren Clarke sits two shots off the foot of the leaderboard on plus three.