Moving day 65 shoots Seamus Power into the mix in California

Seamus Power followed World No. 3 Jon Rahm into the clubhouse for a random drugs test after the Waterford man muscled his way into the top 10 just four shots off the lead heading to the final round of the Career Builder Challenge at La Quinta in California.

Power’s third round in the $US 6.2m event was a mix of three outward birdies, and at the second, fourth and seventh holes of the Nicklaus course, before an inward run of five birdies in a six-hole stretch from the 11th to 16th holes.
His only bogey was a poor tee shot left at the par-3 17th from where he three-putted ahead of one of his best drives of the day down the last and with second a little left from where he chipped to some three-feet and holed the par putt.

The effort moved Power into a share of ninth at 15-under par and just four shots from the lead held by American and recent RSM Classic winner, Austin Cook who signed for a 64 to lead by a shot at 19-under.
Rahm, the highest-ranked played in the field, shares fourth place at 17-under par.

Power’s main thought after the round, aside from ‘filling’ a sample bottle, was getting himself to the nearby practice range to squeeze-in a practice session with the driver at the PGA West course driving range.

“I like playing the Nicklaus course and it was reflected in my scoring today,” Power said.
“It was a little disappointing to drop that shot on 17 but overall I am very pleased with eight birdies on the scorecard.
“The strength of my game these three days has been my chipping and putting but then I have just been struggling with my driving and that is why I am going straight to the range after this drugs test.”
“I just need to figure out what I am doing wrong as I am not hitting it straight.”
“My wedges have been good and my scoring clubs have been good but just not hitting it well off tee.”

In fact, Power’s driving accuracy for the three days is just under 49% of fairways hit.
“What I have been doing is missing it left all day but then that drive down the last was pretty good,” he said.
Of his eight birdies, Power singled out the his wedge shot to just three-feet at the par-5 15th hole as the pick of his round.
And now after the ‘grey-hairs’ scenario of late last year when the Irishman managed to regain his Tour card by just $287 the 30-year old is staring at the likelihood not only a first Tour victory but a hopeful top-3 finish and a very sizeable pay cheque that would go an enormous long way to securing full membership for the 2018/19 season.
“I’m excited at what tomorrow may bring and if I can get my driver figured out I feel as though I am in for a good final round,” he said. 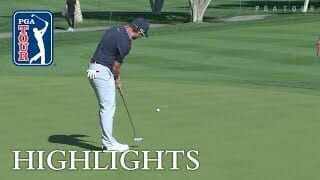