Power bolts up the leaderboard in California

A blistering five-birdie finish blasted Seamus Power up 52 places and into a tie for 36th on moving day at the CareerBuilder Challenge in California.

The West Waterford man fired a timely, bogey-free six under par 66 to make a significant move ahead of the weekend.
Having started on the back nine, Power crucially managed to stay patient as he carded just the one birdie on the par-5 11th over his opening half.
He was quiet around the turn too but the fireworks started when he reached the 4th, his 13th. A birdie three at the par-4 was followed by two more gains at consecutive par-5s on 5 and 6, but he showed no signs of stopping there.

A fine two at the short 7th was further enhanced by a birdie three on 8, and the only surprise was that he didn’t birdie the last too.
Still, home in 31, Power will be hoping for a repeat performance when play resumes tonight to potentially play his way into a top-10 finish. With the wind expected to blow, who knows what might happen.

He’ll be doing well to catch Andrew Landry, however, who holds the 36-hole lead at the tournament after shooting 63 at La Quinta Country Club and 65 at PGA West’s Nicklaus Tournament Course. He is bogey-free through 36 holes, making 14 birdies and an eagle.

Jon Rahm, the world’s third-ranked player, lurks just one shot back, and both players must face the treacherous Stadium Course on what is forecasted to be a tough final day.
“I know it’s supposed to be blowing tomorrow, … but I think I have really good control of my golf ball right now, so it shouldn’t be too big of an issue,” said a confident Landry. 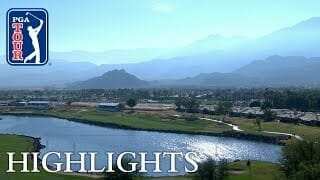