Power finishes on a high with final hole Eagle in Hawaii

Seamus Power holed out from just off the green for an eagle three at his final hole to finish on a positive note at the Sony Open in Hawaii.
Having failed to motor on moving day, Power signed off for a three under par 67 on day four, good enough for a share of 54th spot in Honolulu.

It wasn’t exactly the result he would’ve wanted after comfortably making the weekend cut, but it’s four rounds under his belt regardless as Power hopes to improve on a nail-biting Rookie year on Tour that saw his PGA status come right down to the wire.
There’s no such fears for Patton Kizzire, however, who claimed his second PGA TOUR win this season, outlasting James Hahn as the sun began to set in Hawaii.

And he immediately put his mind forward towards a third.
“I love trying to get better and putting myself in uncomfortable spots. That’s all I want to do is just to be somewhere that I’ve never been because that gets me uncomfortable. That’s when I know I’m doing something right,” Kizzire said.
“I’m just going to keep working hard. I want to get the third win. The first win was big, and this one is even bigger.”
Kizzire jumped to a huge lead in the FedExCup after becoming the first multiple winner this season. Having first won the OHL Classic at Mayakoba in the fall Kizzire now has 1,213 FedExCup points – a 452-point lead over second placed Pat Perez. 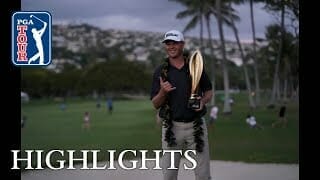