Power drops back on moving day in Hawaii

Seamus Power endured a frustrating afternoon on moving day at the Sony Open in Hawaii. The West Waterford man fell 22 places into a tie for 59th after a disappointing one over par 71.

It was an all too familiar tale of Power failing to capitalise on another PGA Tour cut made as he dropped three shots and picked up just two on his outward half to be out in 36.
He tried to rally on the back nine as all those made ground around him, but the Olympian managed just two more gains and as many bogeys to be home in 35, signing off for a tiring 71.
Power will be hoping to finish strong in tonight’s final round at Kapalua to dispel a worrying trend of weekend disappointment that emerged through his Rookie season. Though the year is in its infancy, a fast start could be the difference between tour status won and lost.
Tom Hoge’s third round 6-under 64 at Waialae Country Club, after opening 65-65, has him one clear at the top of a stacked leaderboard.

Given Waialae often gives up multiple birdie chances, all 13 players within six shots of the lead would fancy their chances on Sunday.
But Hoge starts in front. One clear of Patton Kizzire and Brian Harman. With Kyle Stanley (two back), Chris Kirk (three back) and Russell Knox and Ollie Schniederjans (four back) the nearest other challengers.

All but Schniederjans are already PGA TOUR winners so he has his work cut out for him.
Hoge’s only other experience of holding a lead came after 36 holes back at the 2015 Wyndham Championship – where he was unable to keep pace amongst the heat of competition.
Back then he shot a 2-over 72 when paired with Woods to drop to T21 and out of the mix. Woods shot 68 that day to remain in contention. (Ultimately Woods finished T10).
“Looking back, I started the week 130th in the FedExCup so I needed to have a good day, and I didn’t play as well as I needed to on the weekend,” Hoge recalled of his round with Woods.

“It’s all perspective in professional golf. To go through that environment and to play in that makes it easier for the next time.”
He’s certainly a better player for it now. And one who has had more experience in the clutch.
Like at the Web.com TOUR Championship last year when he needed to make a late charge to even get his TOUR card. He birdied seven of his last 12 holes to make it.
“I started the day somewhere around 30th and I was like one over through seven holes or something. I was looking like it was going to be back to the Web.com,” he said.
“Finally pulled off a few good shots to get things going. I got to the last hole, and I saw that I was probably out if I missed the putt, and I got a 15-footer and made it.

“Events like that kind of go under the radar. I didn’t win the tournament, but to pull it off – it is a lot bigger playing for your job next year than winning a tournament sometimes.” 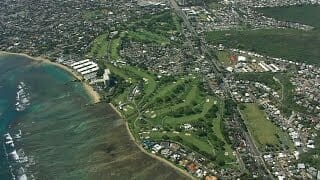