Day one of the Eurasia Cup was a frustrating one for Europe as team Asia came out firing on all cylinders to take a one point 3.5 V 2.5 lead after the opening fourballs at Glenmarie Golf & Country Club in Kuala Lumpur.

On his debut Paul Dunne and partner Alex Noren lost by two holes to Japan’s Hideto Tanihara and Phachara Khongwatmai.
Dunne and Norren were never up at any stage in the match and despite a late rally with Noren carding birdies at the 13th and 14th to claw the deficit back to just one down playing the 18th, Tanihara closed with a birdie to give the Asian pair a two-hole victory.

Dunne struggled with his game on a rain-affected Glenmarie Country Club and walked from the course very disappointed and promising more over the next two days.
“I didn’t feel nervous on the first tee given I have played in many team events before this week and I was excited just to get going but just disappointed I didn’t contribute as much as I should have,” he said.

“We got beaten down the last hole but then we still have plenty to play for and I am sure we can improve.” added Dunne.
“Alex played really nicely and it was just that I didn’t really contribute but then while I am a rookie in the team and there are other rookies, we are all very experienced.

“I know I have a lot more to give and hopefully over the weekend I can do my part in helping Europe turn the result around.
“I was very positive out there and hit a lot of good shots but it is all about getting the job done out there and I guess if you don’t win there is not many positives you can take out of the day.

“The positive thing it is only day one and hopefully we have strong day two and day three and win this thing.”

“The golf course was very wet from all the rain but that is the what you expect competing in the part of the world while the greens are very grainy and good shape but then if you don’t hit the fairways you can be struggling.”

Dunne and Norren are paired together again tomorrow for the foursomes where they face the same opposition in  Tanihara and Khongwatmai no doubt looking to claim revenge and post their first point for Europe.

Thomas Bjørn’s men found themselves behind in four matches and all square in the other two as Asia dominated in the early stages of Friday’s fourball matches, but Europe managed to turn the tide on the back nine as putts began to fall in all over the course.

English duo Tommy Fleetwood and Paul Casey put the first point on the board with a 4 & 3 victory over Byeong Hun An and Kiradech Aphibarnrat in the opening match, the pair getting off to a flying start when they went two up courtesy of a birdie from Fleetwood at the first and Casey’s long-range eagle putt at the third.
The hosts then picked up two points in quick succession, with Yuta Ikeda and Gavin Green beating Belgium’s Thomas Pieters and England’s Matthew Fitzpatrick 2 & 1 before 2016 Open Champion Henrik Stenson and rookie Alex Levy fell to Sunghoon Kang and Poom Saksansin 5 & 4.

The Asian pair went five up inside seven holes after starting the day with eight straight birdies and despite some impressive scoring from Stenson and Levy, Kang and Saksansin cruised to victory.

Englishmen Ross Fisher and Tyrrell Hatton then put Europe back on level terms with a 5 & 4 win over Anirban Lahiri and S.S.P Chawrasia. Birdies from Fisher as the sixth, eighth and ninth had the European pair three up at the turn, while Hatton fired two further birdies at the 11th and 14th to wrap up the point.

After Alex Noren and Paul Dunne had lost to Hideto Tanihara and 18 year old Phachara Khongwatmai by two holes, Li Haotong and Nicholas Fung halved their match with Rafa Cabrera Bello and Bernd Wiesberger giving Asia a one-point lead at the end of the opening day.

European Captain Bjorn remained upbeat despite losing ground on the opening day.
“I’ve been talking to the guys all week that expect them to come out firing. Expect them to be 100 per cent up for this and they are going to go out and play some good golf. We needed to be ready to play. When I look at the scoring in the groups, I feel like, yeah, a couple of guys might feel like they should have done better but in general, there was a lot of good golf from our side.” Said Bjorn.

“The results speak for themselves on both sides. There’s some guys that played extremely good golf. You look at our top pairing today, quality all the way through. They are class, both of those boys. It was nice to see Paul (Casey) come back into the fold of European golf and go out and being determined at delivering a performance that’s just world class.

“I suspect that we’ll go out tomorrow and be ready to play, and foursomes is a very different game. We are looking forward to the challenge ahead, but we are in a position where we feel like we knew we could find ourselves in, and we knew this Asian team is very strong and very much ready to play.

“We were quite early in the week aware that we were going to make two different line-ups for fourballs and foursomes, and I look at those foursome pairings that I put out tomorrow and I see some very qualified pairings. When players go out today and they play extremely well, that’s in fourballs.  Their games match up different in foursomes.

“I learn something every second of the day when I’m a captain, but I don’t only do that here. I do that every day and I talk to a lot of people. Being captain is something that is a role that you take on and it’s a role that once they start playing golf, you realise that things are very much out of your hands.  You can do all the preparation and put everything in place, but it’s for them to go and play the golf.” 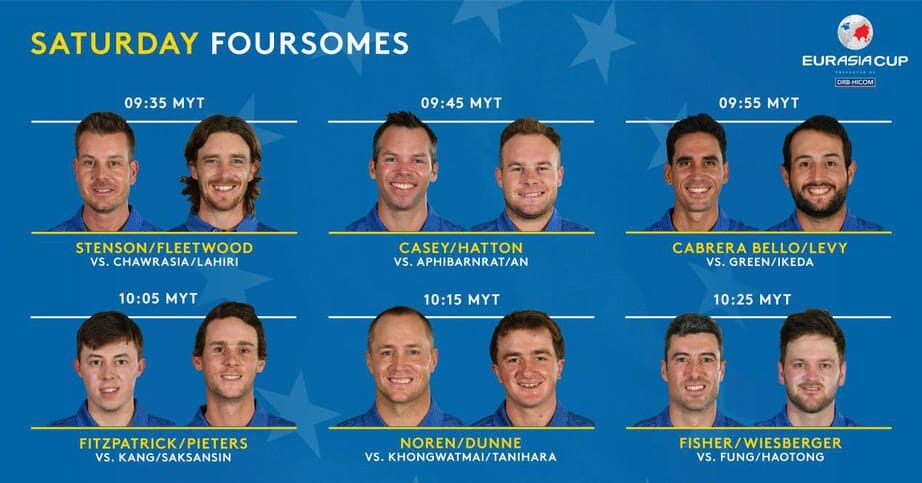