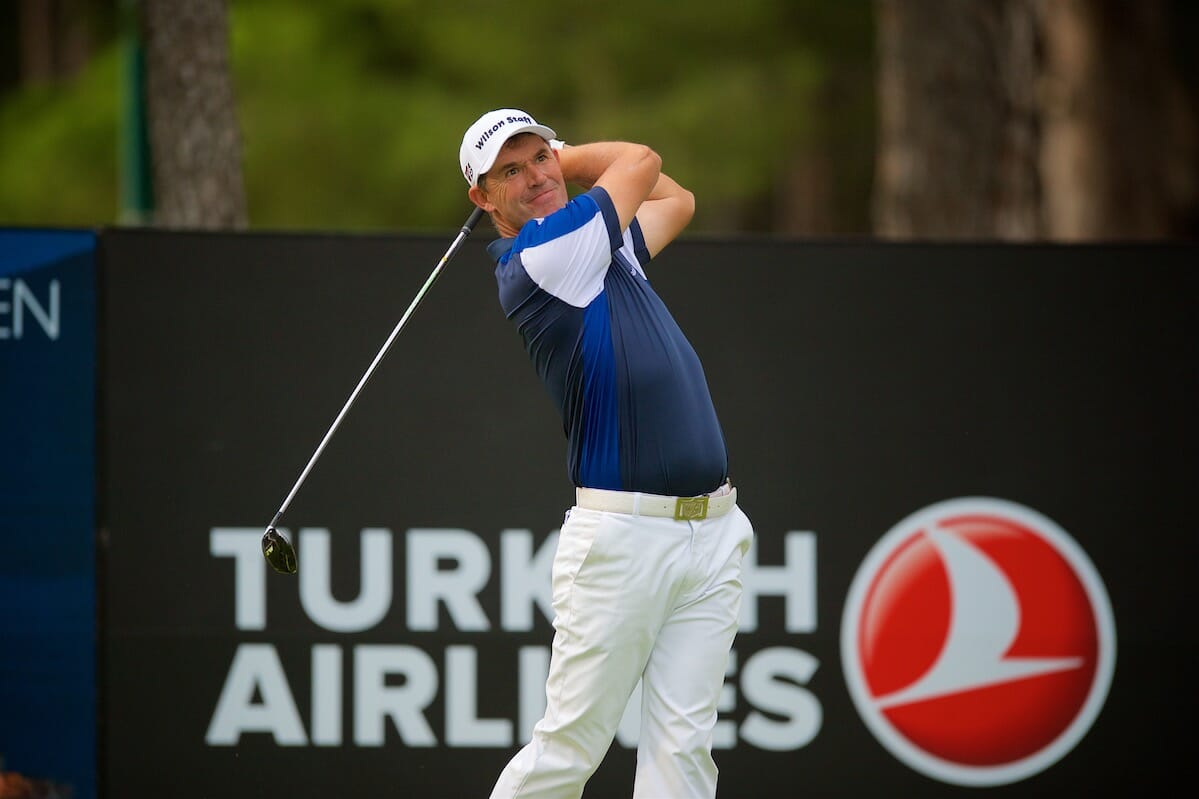 After a frustrating stop-start 2017 season Padraig Harrington will head into the New Year with some further uncertainty.

Harrington ended his 21st year in the pro ranks with his arm over the shoulder of 13-year old son Paddy after the duo had combined to compete in the Father-and-Son Challenge in Orlando.

It was a clearly a very proud moment for three-time Major winning Harrington before being greeted by his wife of 20-years Caroline and their youngest son, 10-year old Ciaran.

It also brought down the curtain on a season punctuated by a shoulder operation late February and a freak injury in June when Harrington was struck on the elbow while hosting an amateur outing.

All up, Harrington played just 11 PGA Tour counting events, the least he has contested since joining the Tour in 2003, while he managed 10 regular events in Europe with the best finish being fourth in both the Scottish Open and Turkish Airlines Open.

Harrington had been carrying the nagging shoulder injury since the 2016 Rio Olympic Games, the result of a very uncomfortable Brazil bed.  He sought countless opinions and advice before finally heading home following the Honda Classic, an event he’s won twice, to go under the knife.

However, it didn’t help Harrington’s Tour plight that prior to surgery he had missed the cut in four of his opening five PGA Tour events, including the first three.

He had some six weeks off recuperating before returning to the States to make the cut in two events only to be again side-lined.  This time for a month, when he was bizarrely struck on the left elbow after getting too close to an amateur student.

When he returned, Harrington missed the cut in three straight events including his return to Royal Birkdale and the PGA Championship.

Now, after ending the 2016/17 wraparound PGA Tour season well down in 200th place, and with Stateside earnings $US 171,407 his poorest return since joining the Tour full-time in 2003, Harrington heads into 2018 needing to rely on invitations.

The first of his invitations is the January 25th commencing Farmers Insurance Open where Tiger Woods is also expected to return to full-time competiton.

“It’s been great week playing alongside Paddy and the end of what has really been a stop start year for me,” said Harrington.

“But, it has not been a great year for me in terms having so much time off from competition.”

“In saying that, I don’t regret my season in the way I performed but it will be nice to head into a New Year injury-free as opposed to this season. Though every time you end one season you are always thinking ahead to the New Year and that is how I am feeling now.”

“I received an invitation to contest the Farmers Insurance and other invitations are coming through while I’ve got the Honda Classic also early in the year.”

“It does mean having to rely on invitations but I should be fine next year.”

Of course, that would all change for Harrington should he capture a seventh PGA Tour title. And with Christmas fast approaching Harrington was asked what his plans were over the festive season and with the response predictably Harrington.

“Practice and more practice,” he said.