Paddy has the golfing bug after Father & Son in Orlando

Paddy Harrington was clearly itching to play more golf after teaming with his father Padraig and making his ‘world stage’ debut in the Father-and-Son team event in Orlando.

The Harrington’s combined well, recording eight birdies and just two bogeys in a ‘better ball’ six under par 66 second round for an 11-under total in the two-day event.

The effort handed them a share of 16th place a shot behind legendary Jack Nicklaus and his grandson who posted a last day 62 in the 20-team two-player format on the Grande Lakes course.

It was the first time the Harrington’s had contested the event and Paddy who had his mother, Caroline and 10-year old brother, Ciaran waiting for him at the back of the 18th, was already thinking of returning next year.

“The week has been really good and I thought I played really well up until the last five holes as I didn’t hit many great drives but it’s been a fabulous week,” he said.

“I had a bit of a cut in my drives at the start of the week and while I still have it, Ronan (Flood – Harrington’s full-time caddy) had me doing a little drill and while it didn’t always work it was great to has his input.”

“Now that I have played in the event I just want to get out there and play much more golf as this week just has me so excited to want to get better.”

“So, I will be playing more and more golf and hopefully come back much better to this event next year.” 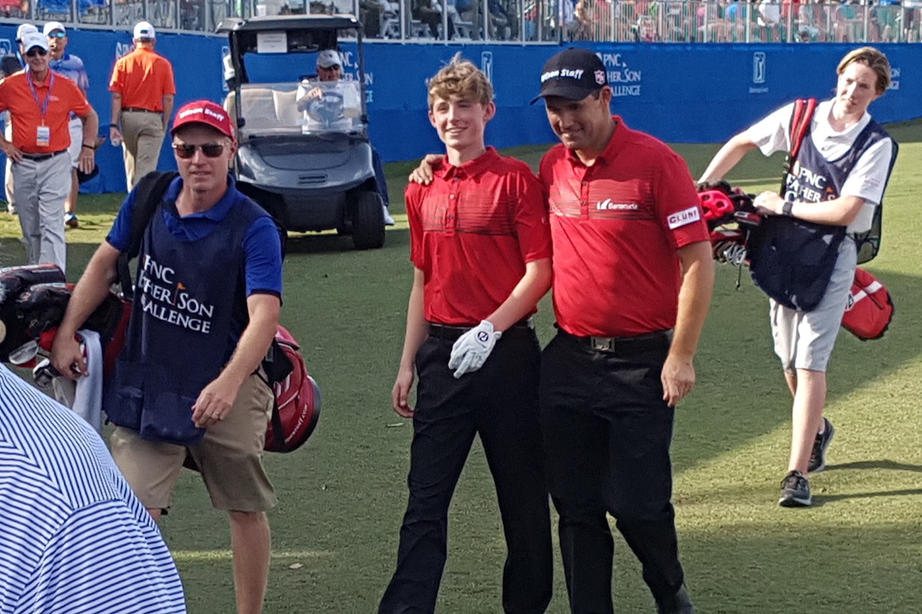 Proud Dad and son as they leave the course. Image from @tourmiss

His triple Major winning father was both proud and excited in how his oldest son conducted himself this week.

“I would like to think this week is the springboard for Paddy to play more golf,” said Harrington.

“As my son, he needs to be a decent golfer but not necessarily a professional golfer but be respectful and just good at the game.”

“The time will come when he’s 30-years of age and he will be playing in a corporate outing and there’ll be people coming out of the clubhouse just to see him tee-off given he’s the son of Padraig Harrington.”

“Of course, I don’t want to put him under the pressure of following in my footsteps but just to be half-decent at the game.”

“And the five days we’ve had here have been great with Paddy probably playing more golf than he has ever and it’s been great to see how he has conducted himself and interacted with everyone competing.”

“So, it’s been a great incentive for him to play a little more golf and you could see throughout the week how certain aspects of his game improved.”

There was then the sight, for a second day, of father and son standing side-by-side signing autographs for some 100 waiting fans.

And the cry from those around Paddy’s age bracket was something that his father has heard so often in his pro career: “Can I have your hat, Paddy?  Can I have your glove, Paddy?”.

Double Major winning Angel Cabrera and his son, Angel Jr won the event by three shots with combined scores of 59 and 60 for a 25-under par victory tally.