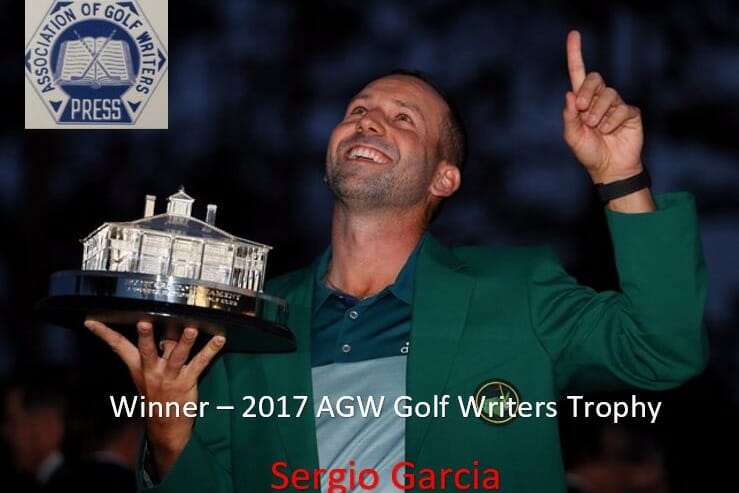 Masters champion Sergio Garcia is this year’s recipient of the Golf Writers Trophy, as awarded by the Association of Golf Writers. The 37-year old Spaniard won an overwhelming majority of votes cast by AGW members following a season in which he claimed his first major title.

Garcia’s Masters victory was one of three wins in what he has described as the best season of his life.  He won the Omega Dubai Desert Classic in February before claiming his first Green Jacket by triumphing in a thrilling sudden death playoff to beat Justin Rose at Augusta in April.  Garcia’s third victory came in October at the Andalucia Valderrama Masters which is hosted by the player’s charitable foundation.
It is the second time Garcia has received the award.  He won the vote after his breakthrough season in 1999 when he was a 19-year old runner up to Tiger Woods in that year’s PGA Championship at the Medinah Country Club near Chicago.

“It is a tremendous honour to be recognised as the AGW Golfer of the Year by the Association’s members,” said Garcia.  “It is something that is very difficult to achieve, so it’s always a pleasure.
“To be voted the award for a second time, it is extremely exciting and hopefully I will be able to win it again.
“We know that both the golfers and media go hand in hand in this business, and we always appreciate when they recognise you for something as big as this.
“So, thank you again to all the members of the Association of Golf Writers for voting me their Golfer of the Year.”

Garcia breaks a duopoly between Rory McIlroy and Henrik Stenson who have dominated the award for the last five years.  McIlroy received the accolade in 2012, 14 and 15, while his Swedish rival won the award last year and in 2013.
The Golf Writers Trophy is awarded each year to the person or persons, born or resident in Europe, who in the opinion of AGW members has made the most outstanding contribution to golf in the preceding twelve months.

“We are delighted to give this award to Sergio,” said AGW Chairman, Iain Carter.  “I suspect very few people would have expected this great talent to have been so frustrated for so long at major championships, especially when you consider how he burst on to the scene.
“Sergio has been a delight to cover for our members.  He has always been a fascinating character loved by fans all over the world and he has generated hundreds of stories in a most colourful career.
“I think the vast majority of us were thrilled that we were finally able to write the story of his first major title.  Typically it was won in great and courageous style.
“We were also very grateful that Sergio chose to join us at our annual dinner at Royal Birkdale this year.  He turned up proudly wearing the green jacket and his presence in such coveted attire helped make it a hugely successful evening.

“It is only right that our membership have chosen to bestow him with our most prestigious award and we send our warmest congratulations to Sergio and his team.”