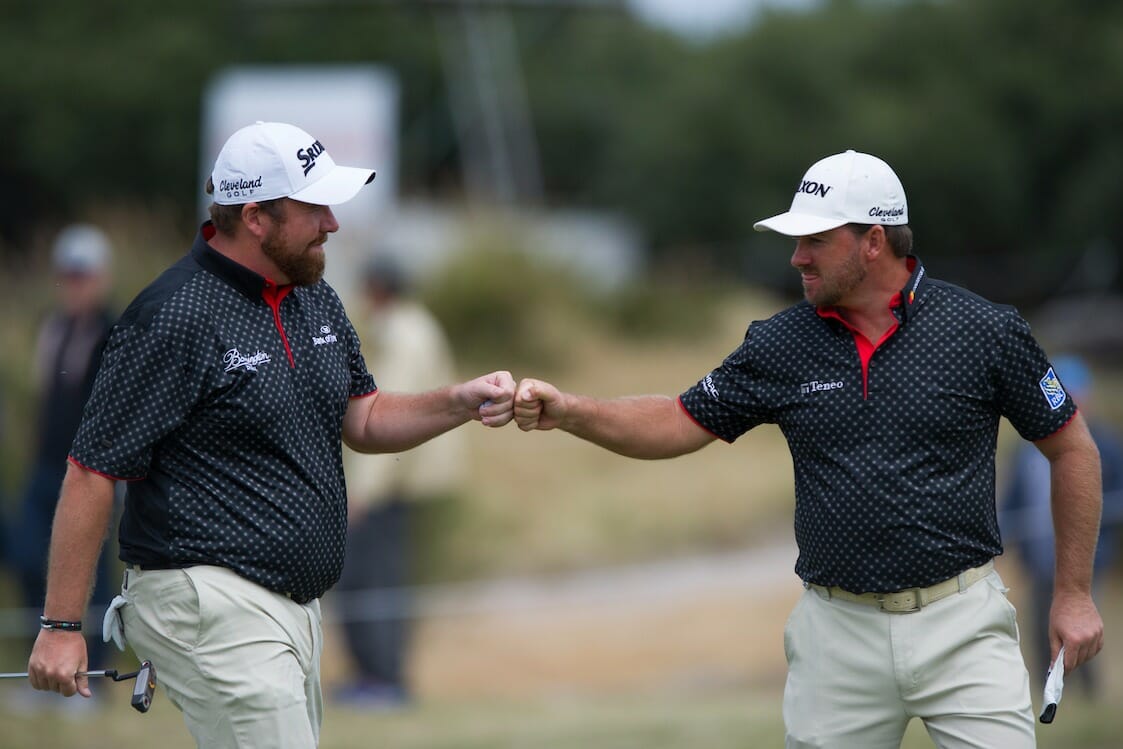 The all-Ireland duo of Graeme McDowell and Shane Lowry have vowed to kick-start their New Year campaign in earnest after the agony of letting slip an historic victory in the QBE Shootout at Naples, Florida.

American’s Steve Stricker and Sean O’Hair came from two shots adrift of the Emerald Isle pair to win by a similar margin with an eight-under par 64 for a combined 26-under par winning total.
McDowell and Lowry had been just one behind with two holes to play only to see O’Hair eagle the 17th minutes ahead of McDowell eventually holing a long birdie putt on 18 for a 66 for their 24-under tally.
“It’s really disappointing to come slow close and just fall short at the final hurdle,” said Lowry.
“G Mac and I said at the start of the week if we could go to dinner on Saturday night well in contention then we would be more than happy and that is what we managed to do.

“So, to be leading by two shots at one point near the turn and finish runner-up is a tough pill to swallow but then I am excited to have ended my year so well and very much looking forward now to coming back to the States with the family early next month.”
McDowell, who had been runner-up also in 2010, remarked: “It was great for Shane and I as we really got into the spirit of the competition but to come up short again was disappointing but then it was tough out there today in the cold out there.
“Overall, I thought Shane and I ham-and-egged it well and there was just a couple of putts out there today, including that one on 10 that I still no how it didn’t drop, that we should have holes.

“It’s been a good week but now lookingn forward to the Christmas break and gettting back out in the New Year with plenty of encouragement after some decent results these past few weeks.”
The Irishman were each handed a cheque for $US 257,500.
It is the third occasion in his last four events Lowry has gone close to success while McDowell was chasing a first win in two years.
The U.S./Ireland rival pair had been tied at 18-under heading to the final day of the 12-player Greg Norman hosted event.
And McDowell and Lowry soon took the bite out of the Norman-designed Tiburon course in the bitterly cold conditions only to move to the slow lane and see their American-born rivals go past.
McDowell and Lowry got the start they wanted birding the par-5 first hole, and as the leading five groups had done, before moving to 20-under with a birdie at the par-4 fourth.

Lowry took the team into the lead at 21-under with a six-footer for birdie at sixth for McDowell to then extend their lead over their rivals to two shots in draining a 15-footer at the par-3 seventh.
Then falling short of the green at the par-3 eighth the Irish duo dove-tailed superbly when after McDowell sent his putt well past the hole, Lowry stepped-up to chip his shot to within inches of the cup to save par.

Stricker and O’Hair drew level with three birdies in succession at from the seventh before agony for both teams at the par-4 10th hole when McDowell’s birdie putt stopped right of the edge. McDowell just stood there with both arms behind his back and looking around be-wildered for some seconds that his putt didn’t drop before using the toe of his putter to hole out.
Fortunately for the Irish O’Hair’s birdie putt then lipped-out for the two teams to remain tied at 22-under before the Americans went ahead by one to 23-under par with a birdie at the par-4 11th. That pressure was no more evident when Lowry dropped his putter in disgust after  McDowell missed a birdie putt at the par-3 12th hole but due to Lowry’s own fault after missing his own birdie attempt.

McDowell then played a great second shot into the par-4 15th and with McDowell remarking: “That’s the first time I’ve made a decent iron swing all day.” Finally, and after five straight pars, there was Irish delight when McDowell rolled in a five-footer on the par-4 15th to get within a shot at 23-under par of their rivals.

But the runner-up writing was really on the wall when both player found the bunker guarding the green at the 17th and with Lowry’s ball right up against the wall of the bunker and leaving him no option to play sideways left to another part of the bunker.
Lowry returns back to Dublin this morning (Mon) and McDowell headed back last night to his Orlando home. The duo will be reunited on January 25th when they tee-up in the Farmers Insurance Open at Torrey Pines near San Diego.