Woods gets the adrenaline flowing again in the Bahamas 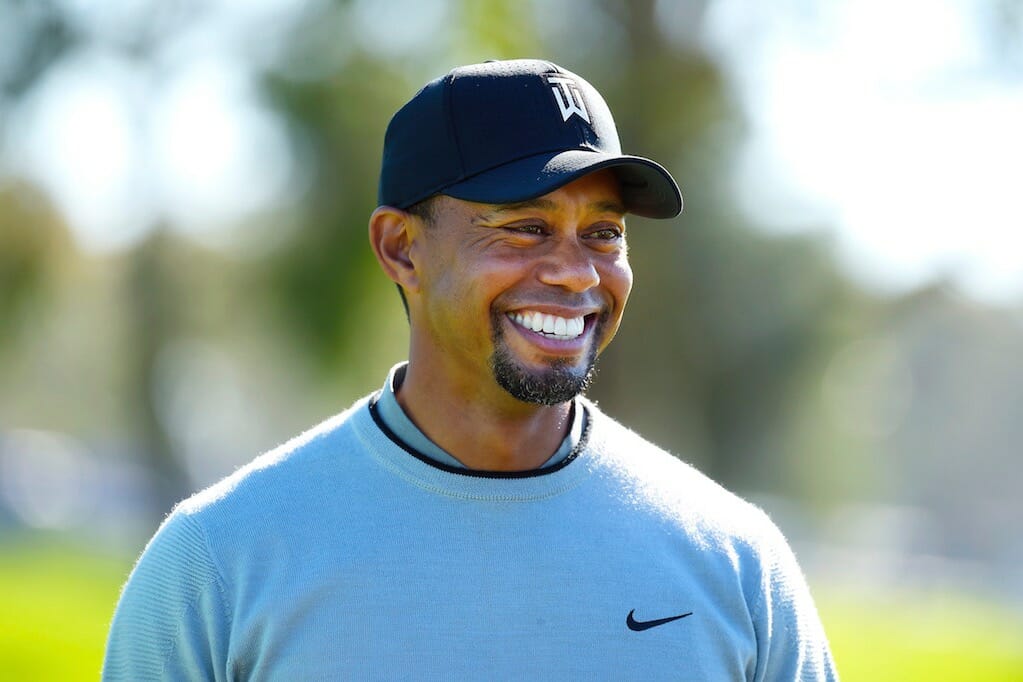 Tiger Woods ended a long 301-day wait by posting a three-under par 69 and boldly declaring he can win his own Hero World Challenge at Albany in the Bahamas.

Woods walked from the course sharing eighth place in the 18-man field and just three shots adrift of European No. 1 Tommy Fleetwood contesting the event for a first time.

Fleetwood signed for a 66 to be one clear of Americans Matt Kuchar and Richie Fowler.

Woods opening round, in an event he has won five-times in the past, was probably TVs most-watched round of golf this season.

And Woods didn’t disappoint.  Striding down the last with not one but two rainbows appearing overhead to then declare he can win – in what would be a first taste of success since capturing the 2013 WGC – Bridgestone Invitational.

“I am only three shots back and all I am thinking of now is winning,” he said.

“I went to the first tee thinking of the victory and that thought hasn’t changed. Today was not only nice to get the first round out of the way, but to be only three shots off the lead is pleasing.”

“So to be able to put myself in there after not playing for, is it 10 months or so, in the neighbourhood of that, it was nice to feel the adrenaline out there.”

“Today was good also because I was just grinding my way and trying to put the ball in the right spot. The biggest takeaway for me is to just keep progressing and all I am trying to do is just keep plodding along.”

“I do need to clean-up some little things but I am in a good spot now with three rounds to play.”

Woods had stepped onto the first tee near noon local time to be introduced a few minutes later: “Next on the tee.  The five-times Hero World Challenge champion and tournament host from Jupiter, Florida.  Please welcome Tiger Woods”.

With that Woods stood-up to send a booming drive down the first and the first time he had a scorecard in his back pocket since withdrawing ahead of the second round in January’s Dubai Desert Classic.

There had been plenty of handshakes and ‘Welcome Back’ on the Albany practice range from his fellow 17 competitors with Woods dressed in menacing-like black shirt and trousers.

He two-putted the first two holes for par before two-putting the par-5 fifth hole for the first birdie of his round.

We had the first Woods fist-pump for a very long time when he drained a bomb to save par at the fourth before he parred the next three ahead of sinking a 25-footer at the eighth to go to two-under.

The current World No. 1199 then showed some rust in making a mess of a short chip shot at the back of nine and with Woods letting go with a very audible ‘F’ word in a first bogey.

The bogey clearly fired him up though and he launched one of his longest drives all day, a booming 340-yard effort down the par-4 10th hole, being rewarded with a birdie in sinking a 12-footer.

Woods then showed some frustration slamming his club into the ground after a poor tee shot at the par-3 12th hole before a birdie at 13 to go to three-under and then birdied 14 to go four-under.

There was also a first yell of ‘Fore Right’ resulting in a first penalty drop in 10 months for the 14-time Major winner after a wild drive right on 15 that left him needing to take a penalty drop for only a second bogey.

Woods then parred his closing three holes for his 69.

“I was clearly in position to shoot something like five, six or seven under par today but I just made a couple of mistakes of the par fives.”

Woods hit seven of 14 fairways, 11 greens in regulation and had 28 putts.

“The best part of my game today was my driver and my putting,” he said.

“But I have to say getting up this morning and walking to the first tee I was really thankful.  In my head I was thanking the people who have really helped me and who gave me that chance to come back and play this round again.”

“There are a lot of people who have been instrumental in my life including outside people I have never met before and obviously, my surgeon. I just made sure in my head that I had thanked everyone.”

In other news Tommy Fleetwood could be headed for a double celebration as he is getting married on Tuesday at the exclusive Albany resort and is playing alongside Race to Dubai rival Justin Rose (68) who is attending the wedding.