It’s just FOUR days until the return of Tiger Woods and he will jump 250 places on the world rankings by just by teeing-up in this week’s Hero World Challenge in the Bahamas.

That is nearly the same number of spots Aussie Wade Ormsby moved up on the rankings when he captured the UBS Hong Kong Open!

Woods heads into the elite no-cut event ranked 1,199th in the World and given the strength of the field teeing-up at Albany the big move is predictd given the long-time World No. 1 has contested just three tournaments in the last two years and those being last year’s Hero World Challenge and two events earlier this year – the Farmers Insurance Open and just one round of the Dubai Desert Classic.

However, if Woods were to win this week it is predicted he could jump as much as  1,000+ places and into the top-140 on the rankings.

Woods has not been that high on the ranking since dropping to World No. 133 with a tail of the field finish in May 2015 at The Players Championship in Florida.

Woods got his first look at this week’s exclusive host venue in a year when he played a practice round early Sunday morning in the company of his caddy, Joe La Cava and good friend Notah Begay.

The three had the ‘Members Only’ course to themselves before being joined on Monday, and the first day of official practice, by the likes of World No. 1 Dustin Johnson, World No. 2  Jordan Spieth, World No. 3 Justin Thomas and local resident and World No. 6 Justin Rose. 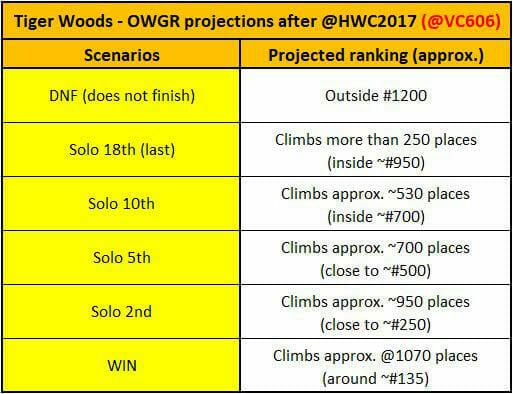