Shane Lowry fell just short of a most unlikely DP Word Tour Championship win after his stunning final round 63 and 19 under par total was pipped by Jon Rahm by a single stroke in Dubai.

Lowry set the bar two hours earlier at minus eighteen in the clubhouse, and though the number seemed a little shy at first, as the day wore on and the challengers faded a playoff looked a real possibility for the Clara man.

It didn’t work out that way but Lowry finished off his 2017 European Tour season in style regardless and his runner-up finish earns him €612,356 this week, moving him up to 22nd on the overall Race to Dubai rankings.

“The golf course was there for the taking as there was not that much wind and the greens were as good as you’ll see,” Lowry reflected.
“I just felt a low score was out there.  I didn’t know I was going to shoot the best score of the season on my last day of the season.
“At least it gives me something to smile about going into my Christmas break.”

Lowry began the day six shots off the pace set by overnight leader Justin Rose but said yesterday that he had the golf for a 63 or 64 in him to make a run at the lead today. And so it proved with his ten birdie haul his best score since a then European Tour career low of 63 on day three of the 2011 Iberdrola Open. 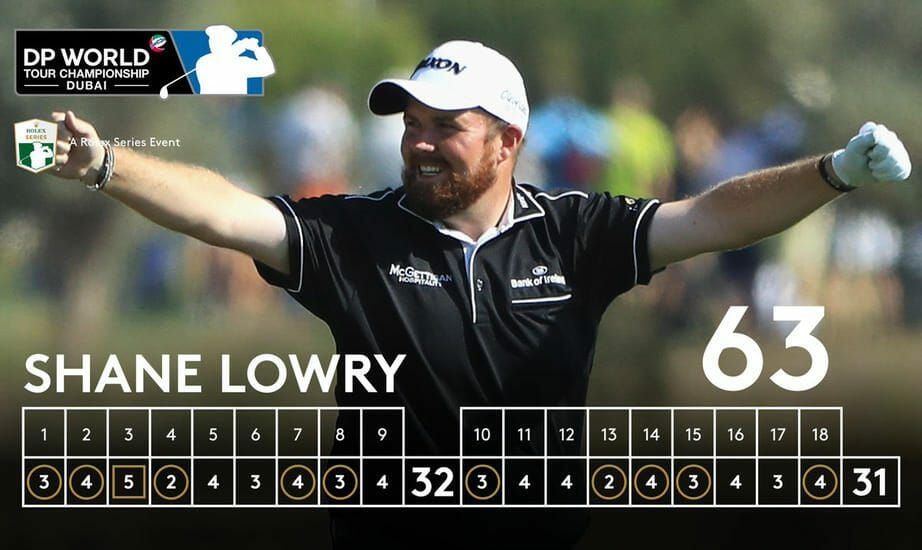 “My iron play has been great over the last while and I’ve given myself lots of chances,” Lowry said.
“The last few weeks I managed to hole a few putts and this week in particular, I felt like I drove it quite well. I felt like my whole game came together this week.

“It was a disappointing finish on Saturday and that really kind of put me out of the running to win the tournament but I finished at 18-under and only just missing out by one shot.
“I’m happy with my results, a few World Ranking points and a few valuable Ryder Cup points, as well.
“So, I’m looking forward to a nice break in the winter and back out in January.”

The result earns Lowry a place in next year’s Open Championship at Carnoustie for finishing the season top-30 on the money list.
More importantly, his best result all season will see him jump from 85th to around 56th on the World Rankings and that much closer to breaking back inside the world’s top-50.

As well, Lowry makes a huge jump in the European Ryder Cup standings moving into sixth place behind Justin Rose (1), Tyrrell Hatton (2), Rahm (3) and Matthew Fitzpatrick (4) and the current top qualifiers.
Dubai is not the end of Lowry’s year as he is teaming with Graeme McDowell for one last event before moving his young family to Florida and that is the December 8th starting QBE (formerly Shark) Shootout in Naples, Florida.

The title belongs to Jon Rahm, however, as the Spanish Toro carded a closing 67 to pip Lowry by one, while a late slip from Justin Rose handed Tommy Fleetwood the Race to Dubai Championship.
Rose had looked on course to claim both the eighth Rolex Series event of the season and the Race to Dubai as he turned in 32 at Jumeirah Golf Estates but three bogeys on a dramatic back nine brought him back to the pack and opened the door for Rahm.

The Spaniard came home in 33 to get to 19 under and win his second Rolex Series title by one shot, with Rose slipping back into a tie for fourth that was not good enough to overturn Fleetwood’s 256,737-point advantage in the Race to Dubai Rankings presented by Rolex.

Fleetwood signed for a closing 74 to finish in a tie for 21st and end a season that has brought wins at the Abu Dhabi HSBC Championship and the HNA Open de France as Europe’s Number One.
Rahm – who was handed the Sir Henry Cotton Rookie of the Year award this week – adds this win to his Dubai Duty Free Irish Open Hosted by the Rory Foundation title and becomes the first player to win multiple Rolex Series events. “It’s hard to sum it up,” said Rahm. “An incredible week, I could not be more proud of what I’ve done this week. It could be very easy to just be content with getting the award and just being here and trying to play the best.
“Having the weekend that I’ve had, actually shooting 12 under on the last 36 holes, bogey-free round today, it’s really special.
“I didn’t plan on being here at the beginning of the year and I sure didn’t plan on winning it so it’s an incredible feeling.”

The margins were so tight in the season-long battle that had Rose finished one shot better he would have won the Race to Dubai, while a birdie rather than a bogey on the last and a play-off win over Rahm would have seen Garcia take the crown.

In the end, Garcia slipped to fourth in the Rankings as he was overtaken by countryman Rahm, with Rose finishing second behind fellow Englishman Fleetwood.

Paul Dunne ended his season with a disappointing last round 75 for a nine-under par total and a distant share of 25th place.

The Greystones man never recovered from a second hole double bogey ‘7’ and also dropping shots at eight and nine before a birdie at the last, and a hole he played in four-under over the four days. Still, his finish earns him € 74,117 leaving him in 16th on the Race to Dubai list.
Like Lowry, there will be no rest for Dunne as he was headed straight to Dubai Airport after his round for a flight to Hong Kong and Thursday’s start to the 2017/18 European Tour wrap around new season.
Dunne will join Rose along with Masters champ, Sergio Garcia and new European Tour No. 1 Tommy Fleetwood in the UBS Hong Kong Open.
And the quietly-spoken Dunne’s effort in finishing the year top-30 will see him tee-up alongside the trio next July at Carnoustie.