Mixed starts for Power, Paddy and Gmac in Georgia

Seamus Power came out best of the Irish on day one of the RSM Classic after his three under par 69 left him in a tie for 28th spot in Georgia.

In a relatively stress-free round of golf, Power took care of the two par-5s on the outward half in birdie fours to make the turn in 34, playing on the Plantation course at Sea Island golf club [the other being the Seaside course, also in play this week].

Things got a little better on 10 too as the West Waterford man added another gain to move to three under par. He let one slip on the par-3 15th, but that proved to be his only dropped shot of the day, the lengthy Olympian finding the par-5 18th in two and duly two-putting to break the 70 barrier.

Padraig Harrington had a typically eventful round of golf, eventually signing for a one under par 71 that threatened to be so much better on a frustrating day for the tinkerman.

Also on the Plantation course, Harrington took advantage of a nice approach on the 2nd to land his first birdie of the day. A penalty drop at the 4th led to a bogey six before the Dubliner gave up another on 6 to fall to one over.

Parity was restored with an up and down for birdie on the par-5 8th before the three time Major winner’s game clicked into gear. Three birdies followed at 12, 16 and 17 with another chance to come at the reachable par-5 finale, until Padraig found trouble.

Taking a second penalty drop for the round, Harrington limped to a seven at the last, but with plenty of positives to bring into tonight’s second round in Golden Isles.

However, Graeme McDowell signed for a disappointing one over par 73 on the same layout. After his mini-revival of late, Gmac stands in danger of missing the cut, currently in a tie for 118th after the opening day’s play.

American Chris Kirk eagled the final hole to surge to the top of the leaderboard at nine under par. His opening salvo 63 included just 23 putts. The mind boggles… 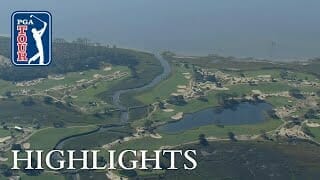