NI Open is a great chance to think outside the box 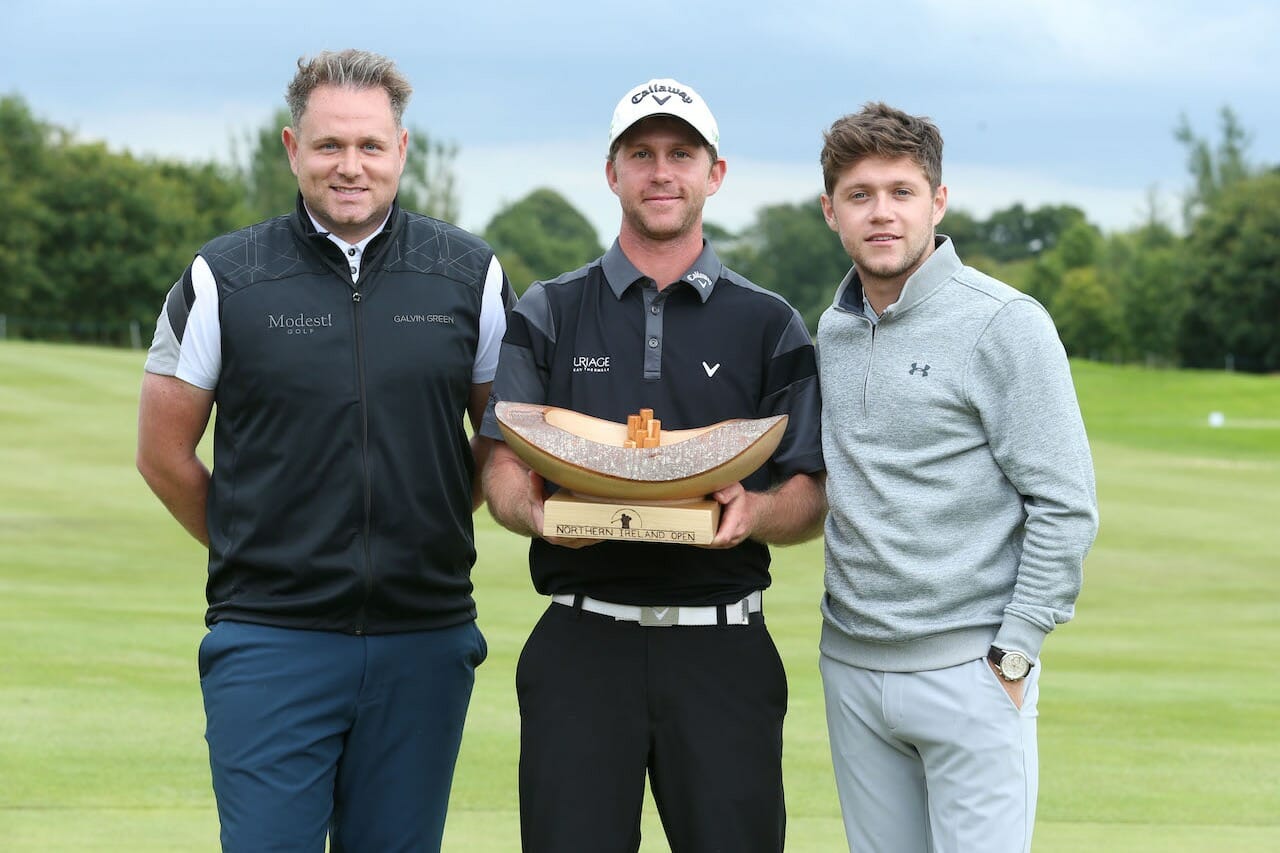 Who could forget the image of Jordan Spieth way right, deep into the dunes, faced with an unplayable lie, his procession towards a first Open Championship in serious jeopardy
Read more

The 2017 Galgorm Resort & Spa Northern Ireland Open was a tournament with a difference. Shootout Sunday was a brand-new format, a calculated risk to create further high drama on the final day in front of grandstand crowds. The presenting sponsors Modest! Golf were instrumental in the changes as a way of introducing a younger audience to the game.

Every year this tournament breaks all European Challenge Tour attendance records, which begs the obvious and age old line: “If it ain’t broke, don’t fix it.” A valid point but the NI Open with the “Shootout Sunday twist” embraces the European Tour’s global vision of coming up with new and innovative ideas for tournament golf.

Other pioneering formats took place in Perth, Australia and Spain this season but the Galgorm showpiece was the first strokeplay, matchplay format adopted to ensure all six-hole knockout matches went the distance and concluded in front the large galleries gathered around the 18th – where the dedicated 100-yard Shootout Sunday hole was also created and used to great effect.

Modest! Golf has been involved with the NI Open for a couple of years but the boutique management company elevated their investment and commitment in 2017 by becoming the tournament’s presenting sponsor.

“Really, we signed up with the NI Open two years ago around the time we launched the business,” explains Mark McDonnell, fellow Modest! Golf director alongside Niall Horan and Ian Watts.

“Niall is on record as saying he wants to ‘support the next generation of talent’ so we quickly identified the need to work closely with the European Challenge Tour. We got involved with the NI Open in 2016 but this year we wanted to make a greater statement of intent.

“It was a no-brainer for us. You need only attend the NI Open one day to see how big the event is and how passionate people are about it. The figures speak for themselves with over 55,000 registering for tickets online and 43,495 spectators through the gates for the week.

“As a business, we felt this tournament clicked for us. We attend a lot of Challenge Tour events and the NI Open is a cut above the rest in terms of how it is run. It is like a main European Tour event. I can’t think of another Challenge Tour event with hospitality down the last hole.”

“But I must say we can only take so much credit because from the day it was established back in 2013, the NI Open has been an exceptional tournament. Gary Henry, Ross Oliver and all the team do a fantastic job.”

“That said, we felt we could bring a bit of that Modest! culture to the party. Obviously through Niall we wanted some musical heritage to shine through, have fun and make tournament golf more appealing for all. We showed that with music on the range through the Red Bull DJs. We hosted several functions such as the Players’ Party at the Ivory Pavilion, while the Players’ Lounge was a fun place to hang out, play table tennis that type of thing. You can’t spend 10 hours a day on the range.”

Whatever about the Modest! touches evident around the venue during tournament week, Shootout Sunday was always going to be the big talking point.

“This is the closest thing to a European Tour event these boys will play in,” said Horan. “We wanted to put a little twist on the format, modernise it a bit. Golf can be perceived as a little slow and we wanted to change that and speed things up, make things more exciting for everyone.”

Horan and the Modest! team have a good relationship with European Tour boss Keith Pelley and they each share a vision of trying to grow the game, to think outside the box and find ways of introducing younger boys and girls to the game.

“We are fortunate through Niall we can reach out to a younger audience, the guys who are maybe playing their PlayStations or going into town rather than playing a sport,” adds McDonnell.

“Shootout Sunday was meant to be a cooler format, quicker and more exciting than traditional 18-hole strokeplay. It needed to create excitement for the final day and it worked. Myself, Niall and the team spent 4-5 hours at the back of the 18th on Sunday and the atmosphere was electric. There was an albatross, a chip-in, a player missed a two-foot birdie putt under pressure, you had everything. And it all came to a head with a great final.”

The final was contested between France’s Robin Sciot-Siegrist and Italy’s Alessandro Tadini. It was the Frenchman, whose mother is originally from Dublin, who emerged victorious with his six-hole aggregate of three-under compared to Tadini’s one-under.

Ardglass’s Cormac Sharvin was the sole Irishman to make it into the knockout Shootout Sunday stage but the former Walker Cup hero came up against a rampant Ricardo Santos from Portugal in the first round.

“The format was great, you don’t have a chance to make any mistakes. It was a change compared to what we normally play and I really enjoyed it,” said the 2017 champion, who received the specially commissioned NI Open trophy bowl and cheque for €28,800.

It is no secret Horan is still the face of Modest! Golf – given his profile it’s difficult to be anything else. And despite a thriving solo career, the former One Direction singer is still hands on with McDonnell and Watt managing key parts of the business from tournaments and sponsors to player management and welfare.

“I met Niall long before joining Modest! Golf, I knew him just after his breakthrough on X-Factor,” explains McDonnell, who had a brief stint working in the football industry before time with key golf brands Cleveland Srixon Golf and TaylorMade Adidas Golf. “Niall and I became friendly through a love of golf and I suppose I was working with Modest! and their artists even before I joined. When they wanted to meet people or do things in golf I would help them.”

“When Niall and Modest! decided to take the business into the sports world, they approached me about coming on board. We remain a boutique company and very much do things the Modest! way. We don’t want any more than 12 players and ideally half of them would be developing players that we can help support them every step of the way. That’s why our involvement in the likes of the NI Open is crucial as it helps secure invites for our players.”

Modest! Golf currently has four players on the books. The first signing was Italy’s Guido Migliozzi in 2016 before South African duo, Thriston Lawrence and Christiaan Bezhuidenhout, joined the stable, while Spaniard Ivan Cantero Gutierrez officially signed during this year’s NI Open. More player announcements are expected from Modest! after the Walker Cup.

“Rory and Niall met down in Australia where Niall was on tour,” explains McDonnell. “I was a mutual friend, they shared a common ground and have since gone on to become great friends. We’ve enjoyed some great nights out and times together.

“Niall and Justin now run a huge charity event together every two years and last time they raised £1million for various great charities such as; Cancer Research, Autism Ireland and Justin and Kate’s Foundation that helps feed underprivileged children in America.

“I’ve known Justin since he was eight. We’ve lived through the highs and the lows, from 21 missed cuts and family losses to the highs of winning the 2013 US Open and becoming the Olympic champion. His family are extremely close to ours and my brother Paul has managed Justin for the last 3-4 years through Excel Sports Management.

McDonnell’s dad Patrick is captain of Northants Golf Club this year, the same club where Rose played all his junior golf. “Justin turned up as a surprise for dad and played in his Captain’s Day. He stayed for dinner and joked about how funny it was to hear cries of fore again with golf balls flying around the place!”

“Justin is an incredible man and an incredible player and he has been a great help to us at Modest! Golf. The advice and insight he gives us is invaluable, he is hugely supportive. He is exactly the sort of player I hope our players can look up to and see as a role model.

“He texted me and congratulated us on Shootout Sunday at the NI Open and said he was watching updates through Twitter on online. I believe Rory [McIlroy] wished Niall all the best for the week too and I know the likes of Rafa Cabrera-Bello was looking in at Galgorm, especially with his brother playing.”

So, when all is said and done, should we expect to see more of Shootout Sunday in 2018?

“It’s a little too early to say, we’ll need to sit down with Galgorm and the tour and see what the options are,” said McDonnell. “We know Michael Hoey has been canvassing the players to get their thoughts. The response has been overwhelmingly favourable and we witnessed a great response on Twitter, but we are under no illusions that the new format is not for everyone. Some have suggested a few tweaks but all in all the feedback has been incredible.”

“It’s still early days but we see Shootout Sunday as a strong brand with longevity and could feature again at Galgorm and on the Challenge Tour.”

This article is taken from the October issue of The Irish Golfer Magazine.

Tune in for the R&A’s ‘Open for the Ages’

No Italian golfer had ever come close to winning the Open Championship, but at the 124th staging of the venerable event in 1995, Bergamo-born Constantino Rocca was in contention coming to the final two holes
Read more
Tour News

Opinions are – and to this day remain so - divided as to which of the trio of Seve Ballesteros Open Championships were the most memorable. We've landed on the second one
Read more