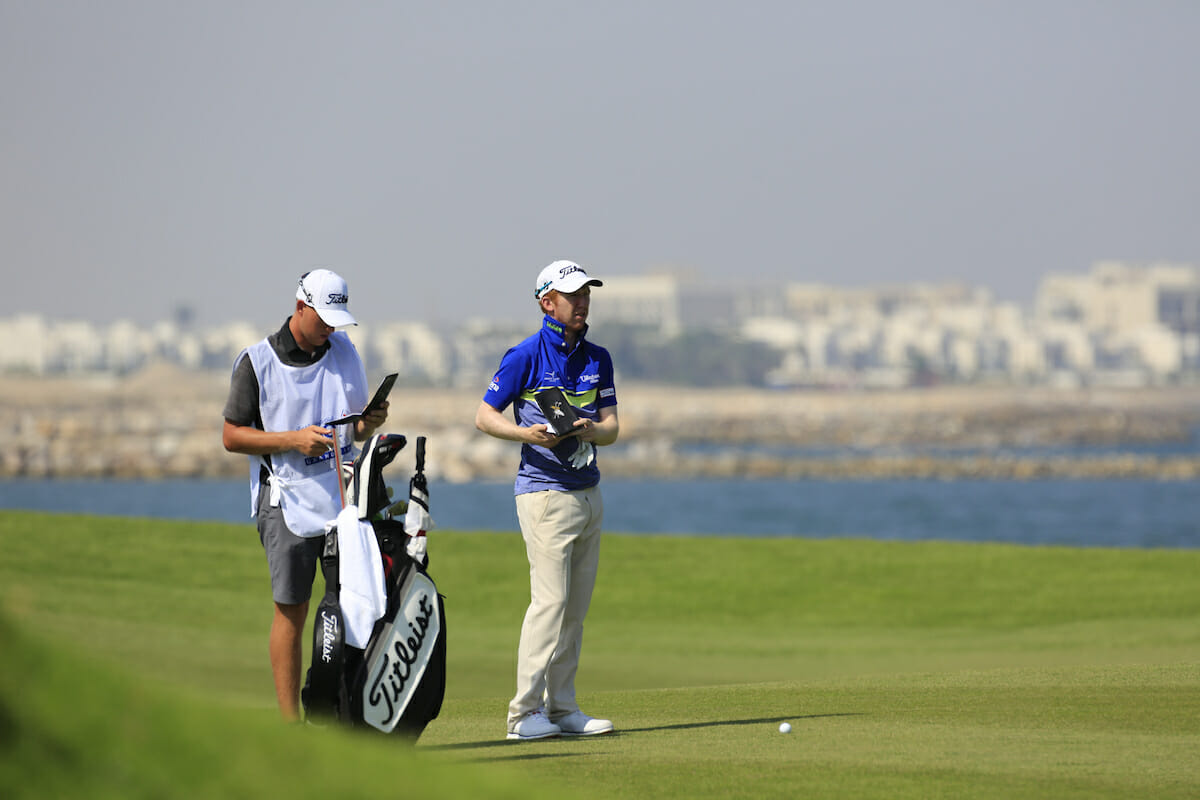 Gavin Moynihan faces a near impossible task to secure his European Tour status for next season after a nightmare start to round three scuppered his chances at the NBO Golf Classic Grand Final in Oman.

Beginning the week 18th in the Order of Merit standings, Moynihan was looking for a top-7 outright finish to break into the coveted top-15 who will earn their cards for next year, but now finds himself nine shots adrift of that target after getting stuck in the mud on moving day.
The Dubliner endured a woeful start, bogeying the first and compounding the error with a double at the second as his hopes evaporated in the desert sun. It’s a credit to him that by the time he reached the turn, those three shots had been restored after birdies on 5, 7 and 8, but he needed some seasonal fireworks to light up his back nine to have any hope going into tomorrow.

Unfortunately that spark never arrived. Despite a birdie on 10 daring us to dream, he gave the shot back at 11 and dropped one more on 17, coming home in 37, a second successive 73 leaving him stranded at level par.
Whatever happened this week, it was always going to be a bonus, the Road to Oman not even on Moynihan’s radar when the year started out. Regardless of what happens tomorrow he’ll have some European Tour starts next year, and a solid foundation on which to build an exciting career in golf. He’ll have wished for something different having got so close, but there’s no doubt is main tour status is now just a matter of when, not if.
That said, the European Challenge Tour season has only 18 holes to go the tense third stanza, with as much interest in those contending for spots in the top 15 of the Road to Oman Rankings as in the top of the leaderboard.

Clément Sordet leads the way at Al Mouj Golf on 13 under par, one shot clear of Oliver Lindell, while behind them many of their rivals spent Day Three playing themselves into contention for European Tour graduation tomorrow afternoon.
While Sordet started the week inside the top 15 on the Road to Oman, the likes of Lindell and overnight leader Estanislao Goya – who is in third place on 11 under par – needed good weeks if they were to earn European Tour cards for 2018.

Lindell is only playing this week on a special release from military service and the Finnish teenager knows only a top-two result will be enough, but a patient bogey-free 70 means he is on course for just that as things stand.
Nervous final days await the likes of Jens Dantorp, who is projected to occupy the 15th and final European Tour spot. The Swede experienced last gasp disappointment in Oman 12 months ago, after a closing bogey scuppered his late charge for a top 15 spot.
Scott Fernandez’s blemish-free third round of 68 has lifted the Spaniard into a share of fourth and he is the most likely man to threaten Dantorp’s place – currently not even 2,000 points separate them in positions 15 and 16 in the projected rankings.

Bradley Neil is another who put himself back in contention today. The Scot started the week in 16th place on the Road to Oman but is 18th in the projected rankings after today.
Out ahead, Sordet – all but assured of European Tour golf for next season – is looking to add a second victory of 2017 following the Frenchman’s win in the Viking Challenge.