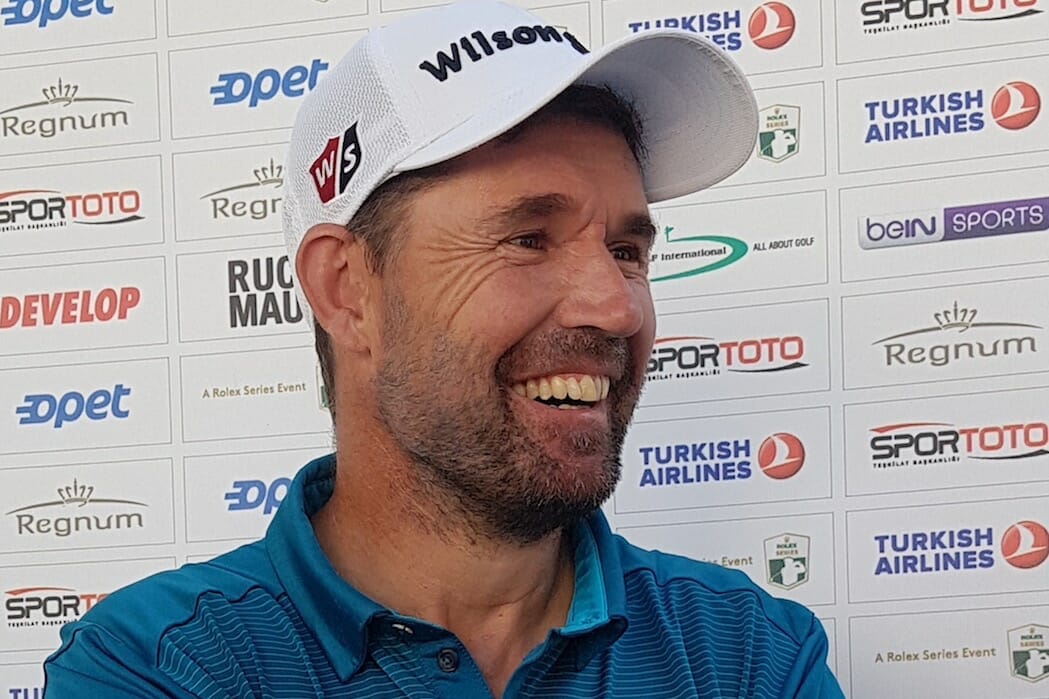 Padraig Harrington produced a lowest score all season but it was not just his clubs doing all the talking at the Turkish Airlines Open at the Regnun Carya resort in Antalya.

Harrington’s six-under par 65 was a stroke better than a pair of 66s he had earlier this year on the PGA Tour and his best in Europe since a 63 on route to victory in last year’s Portugal Masters.

Harrington didn’t drop a shot in superb scoring conditions a day after he won back 50 Euro from Shane Lowry in a practice range chipping contest, after losing the same amount a day earlier in an on-course practice round.

“Myself and Shane spent an hour around the chipping green on Wednesday just having great fun trying to get closest to the hole,” said Harrington.

“Suffice to say, I managed to win back 50 Euro I had lost a day earlier.”

“Then when we went to dinner, myself Dunners (Paul Dunne) and Shane where we discussed what would we do if the three of us were in a play-off this week and would we be trying any harder than for 50 Euro we were playing for on the range?”

Harrington’s opening day effort clearly ignited hopes of a first victory this year while a strong showing would also be a great springboard into qualifying automatically for the 2018 Ryder Cup given this week’s whopping $US7m purse.

“The reason I am here and thankfully I could be in the States, is because if you win one of these two events it puts you under a bit of pressure as in you’re going to be right there for the Ryder Cup,” he said.

“To be honest, if I won one of these two events it would change my schedule for next year. It would mean a huge focus, from winning one of these you have a great chance of making the team.”

“It kind of would be in your own hands if you got a good start like that and that’s why I am here, knock one of these off and there’s such big points in it that it puts you in a good position to make the team.”

Harrington, given he is competing on an invitation, will not earn any Race to Dubai points but whatever he earns will count towards the Ryder Cup.

Harrington revealed he spent last week playing the revamped Adare Manor course before boarding an EasyJet flight out of London to Turkey, including paying 35 quid for his golf clubs.

Work on Adara Manor is clearly in line with the course bidding to host the 2026 Ryder Cup and Harrington and 2018 European Ryder Cup captain, Thomas Bjorn have been seen in discussion this week with observors agreeing – should he not qualify automatically then the Dubliner will be heading to Paris as one of the Dane’s five vice-captains. Harrington having been a vice-captain under both Paul McGinley in 2016 and Darren Clarke in 2016.

“Thomas is one of those people that is hard not to bump into,”said Harrington.  “So, I’ve been bumping into Thomas and he and I have been talking, and thankfully we do talk.  We’ve both been prior vice-captains and playing together for 20 years. He has been very polite, as Darren was. In another two months, three months, six months time maybe that conversation will start changing.”

At this stage, Bjorn has only announced Swede Robert Karlsson as a vice-captain.