It had taken 14 years from 1977, and the first ever score of 59, for a PGA Tour player to sign for a second score of 59 in 1991. But now just nine days after Justin Thomas shot a 59 on the opening day of last week’s Sony Hawaiian Open and 26-year old Canadian Adam Hadwin managed to shoot a 59 on the third day of the Career Builder Challenger here in La Quinta, California.

Unlike Thomas’ effort in Hawaii, and on a par 70 layout, the affable Hadwin posted his round on the par 72 and one of three host venues for this week’s $US 5.8m event. As such, Hadwin is the first since David Duval in 1999, who eagled his last hole to shoot a 59 on the PGA West Palmer Course and also at Career Buider Challenge but in an event then known as the Bob Hope Classic, to sign for a 59 on a par 72 course.

Hadwin’s round had gone pretty unnoticed to the 13th when he posted his 10th birdie to move to 14-under par and this was after commencing his round at three under par. He then went to 15-under par for the day after hitting a 6-iron to 15-feet at 15 ahead of a par at 16.
Hadwin, whose previous lowest round on the PGA was a 63 back in 2014, then secured the 14th birdie of the day in landing a 172-yard 7-iron to six feet at the par four 17th.

It now meant a par at the last would see Hadwin become the ninth player in PGA Tour history to shoot a 59 while a birdie would tie him with American Jim Furyk who shot the all-time PGA Tour low of 58 in last year’s Travellers Championship. However thoughts of a 58 were dismissed when he flew the green with his second shot down 18 and afterwards remarking:  “I hit an 8-rion thinking with the wind I would just let it drift left, and maybe some adrenaline kicked in, as it was a bit long there.”

It meant the Canadian now having to chip his third downhill and he did with his ball stopping three foot past the flag from where Hadwin joined the PGA Tour history books.
“Wow. I don’t really know what to say as it’s still sinking in,” he said.
Adam Hadwin’s name will now be added to those a member of the PGA Tour’s ’59 Club’.
“Everybody talks about the kind of way you get into the zone and I think that’s what kind of happened out there.  I was thinking about the 59, I knew exactly what I needed to do, it just didn’t seem to matter.”
“Frankly, the best hole I played was the 16th hole, as that was a pretty incredible par as I whiffed it a little bit on the left and further than I would like but I had 208-yards to the flag, 109 to the front edge and hit a 6-iron perfect.” Hadwin had just 21 putts in his round and now takes a one shot lead at 17-under into the final round and he seeks that maiden PGA Tour victory title.

Seamus Power was also playing the La Quinta Country Club course last night but could only manage a 71 one under Par that dropped him back 11 places to a tie for 35th on -8 which is 9 shots off Hadwins lead. 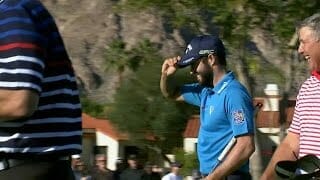