For Ireland’s PGA professionals the lure of competing at an Irish Open remains just as strong as ever. This year, the leading six players on the 2016 PGA in Ireland Order of Merit, will tee it up at the Dubai Duty Free Irish Open hosted by the Rory Foundation.

For Damien McGrane, David Higgins, Colm Moriarty, Neil O’Briain and Simon Thornton the experience should hold no surprises but the sixth and final spot is being filled this year by Richard Kilpatrick, who, at 35, will be playing in an Irish Open for the very first time.

“I can’t wait. The crowds, the buzz, the field that is being assembled. I can’t wait to tee it up, let it go and see what happens. It will be some test,” said the Banbridge golfer.

“I had the chance to play in the Irish Open as an amateur but it often clashed with the Brabazon Trophy and the GUI would send us over to England to compete in that instead. So it means a lot to get to play in my first Irish Open up here (Northern Ireland) and at Portstewart as well. My aunt has a place in the town and I played the course a lot as an amateur.”

“Even now, during the winter and when I can in the summer months I try to get up and play. The club professional, Neil Graham, has been very good in accommodating me.”

Richard turned professional in 2007 after winning the East of Ireland Championship and helping Ireland collect the European Team Championship title. He spent the best part of eight years playing on the Challenge Tour, Alps Tour and EuroPro Tour before opting to follow the PGA route.

“I knew that I wanted to stay involved in golf and for me to do that, the PGA has been a good path,” he added. “I’m learning a lot both in terms of the technical side and the business side of the game and I’m still getting a chance to play.”

He has performed impressively on the PGA in Ireland circuit in recent seasons, and has two wins to his name in 2017 at the PGA Irish Club Pro-Am and the Ruddy Cup for Young Professionals.

“I feel like I have been playing well enough but probably not scoring as well as I would like,” he added. “We have a great lead up to the Irish Open with a two day Pro-am at Carne followed by the Irish PGA Championship at Moyvalley which should help sharpen things up.” 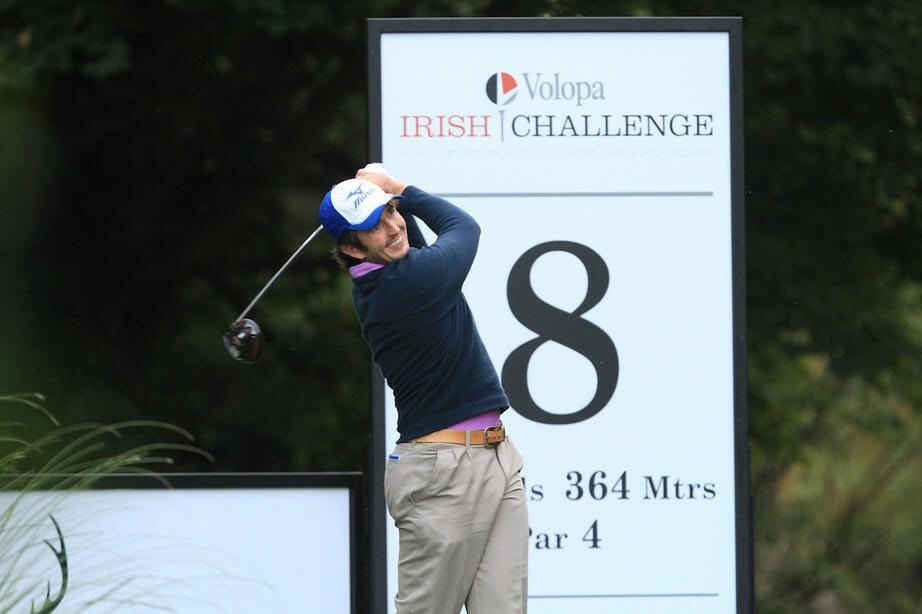 Whilst he may be inexperienced in terms of playing at the highest level, Richard may have pulled off a master stroke when it comes to hiring a caddy for the week. Fellow PGA professional, former college team mate and major winning LPGA caddy, David Jones, will lug Richard’s bag around Portstewart during tournament week.

Jones, a Derry native, who was formerly the PGA professional at Bushfoot GC, also happens to be a member at Portstewart GC and has cleared his schedule to caddy for Richard in the Irish Open.
“I’ve known Davy for years. I was starting my first year of college in America at the University of Toledo just as he was finishing his studies there. He was the groomsman at my wedding last December,” added Richard.

“Having him on the bag is going to be a huge benefit for me. I would imagine that had 90 per cent of the field known he was available for the week they’d have offered him a lot of money to work for them.”

“The thing for me will be getting used to the atmosphere, to the grandstands and the corporate boxes. I’ve played a few rounds up there recently trying to familiarise myself with the place and how it will look during tournament week.”

That’s not something Damien McGrane will have to worry about. The Kells man has been there, done it and bought the t-shirt. McGrane topped the Order of Merit last year and also won the Irish PGA Championship. He is leading the way again in 2017 and if his competitive instincts take over he is capable of making an impact at Portstewart.

You can put Simon Thornton into the same bracket. A winner on the European Tour in 2013 (Najeti Hotels et Golfs Open), Simon is still returning to full fitness following surgery to his feet at the start of the year.

“I think I’ve only missed one [Irish Open] in recent years. It is a great event and you get used to playing in them but this will be a bit different now that’s it’s part of the Rolex Series,” said the 40-year-old.

“For us, as PGA guys, you have to try and blank all that out. You can’t really start thinking about the money that is on offer. You have to focus on those first two rounds and if you can make the cut great, then try and do as well as you can.”

Simon’s ability to play and practice consistently has been hampered by his recovery but he is still convinced he can compete at the highest level, especially on a links course. The Doncaster born golfer lives in Newcastle and plays his golf at Royal County Down. He admits that he wouldn’t be unhappy if the weather was ‘testing’.

“When you play your golf on the main tour. you tend to follow the sun a bit more,” he added.
“Obviously, the weather is a bit more changeable, shall we say, here in Ireland and it can be a bit of a leveller. I would like it to be breezy and a few squally showers wouldn’t do me any harm.”

“I definitely still have the game to compete at that level but whether it comes a month, a month and half too early for me we will have to wait and see.”

“If I am fit and well and on a links course I can compete. The experience that I have now, I won’t go in there being overawed. I don’t go in there thinking they are a lot better than me. I’m used to just going and playing my own game rather than getting sucked into the whole event.”

We wish him and all the Irish PGA players well and hopefully they’ll be competing come Saturday.

This article is taken from the July edition of Irish Golfer Magazine and you can read the edition free of charge by clicking here.