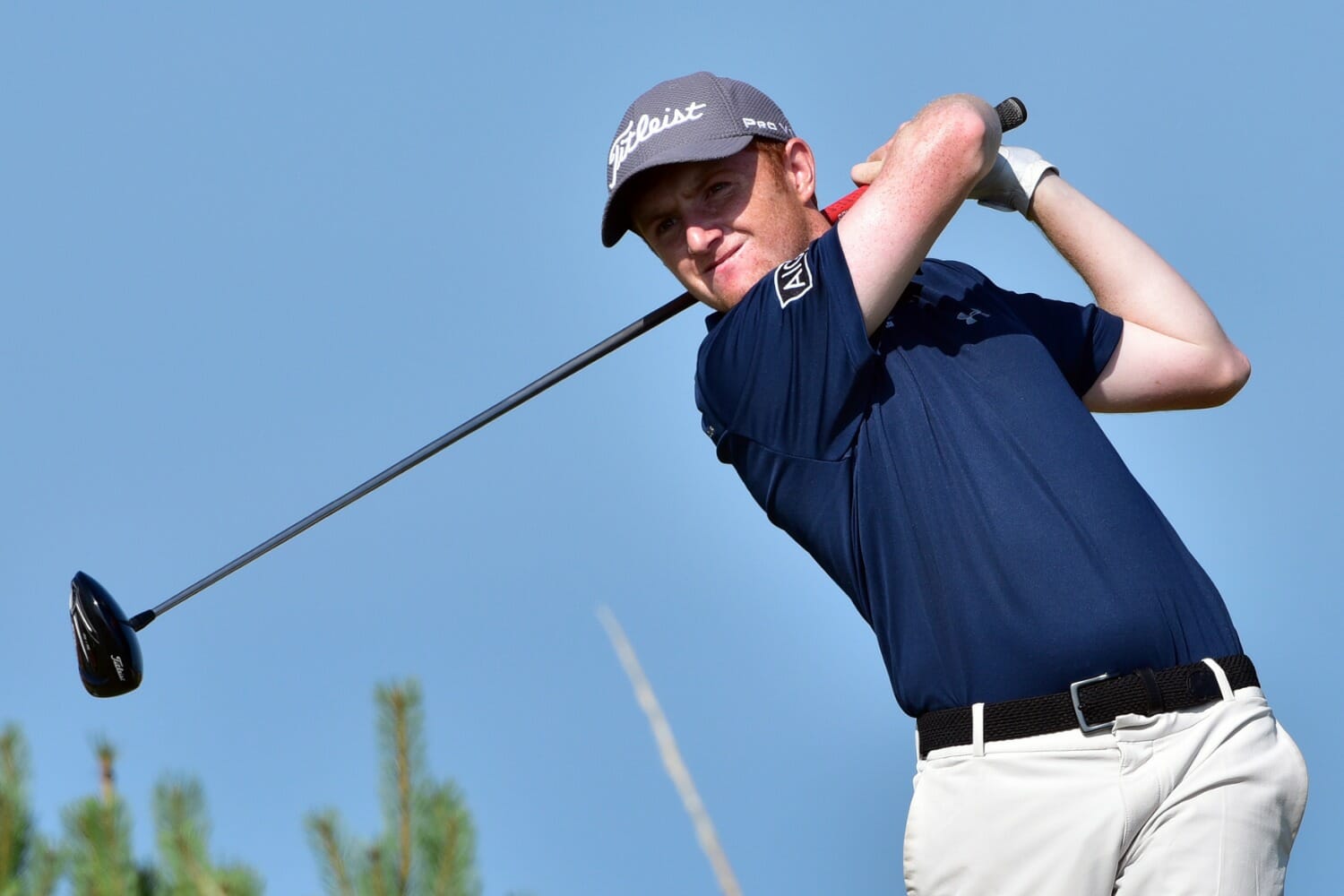 Galway’s Ronan Mullarney carded a superb second round of 67 to lead qualifying at the AIG Irish Amateur Close in The European Club.

Mullarney now faces Keith Murphy (Dun Laoghaire) in the knockout stages after the cut fell at plus 12. A playoff was required to determine the final four places in the match play draw with nine players finishing in a tie for 61st. Murphy came through that playoff along with Owen Crooks (Bushfoot), Peter Kerr (Royal Portrush) and Thomas Neenan (Lahinch).

Conditions were not as kind as the opening day with stronger winds buffeting the players around the Co Wicklow links but they were not forbidding either, and Mullarney shone brightest in the warm sunshine, surpassing first round leader Peter O’Keeffe by posting 67.

Four birdies in his last six holes pushed Mullarney ahead of Portmarnock’s Conor Purcell in the race for silver medal honours yet he never lost sight of the main objective.

Mullarney insisted: “You’re there to qualify not to look like Tiger Woods.”

“I’ll probably get some slagging for it but on 7 [par four] I actually laid up,” he said. “I took my chances from 50 yards. and I actually got it up and down. I pitched it into five feet. I hit driver off the tee, then hit a 6-iron just left of the bunker. If I was playing with a few lads in a four ball it would be very hard to do but in this, no, it’s all about qualifying.”
How then did then he put together such a low score?
“I was looking at Peter’s [O’Keeffe] score yesterday and I just thought it was the most amazing  score I’d ever seen,” said Mullarney. “I knew the greens were soft but 66 around here I thought was brilliant. I suppose he [O’Keeffe] showed me it could be done. I didn’t quite do what he did but not a million miles away.”

The 22-year-old Galwegian birdied his opening hole but turned in level par following a bogey at the eighth. He had to wait until the 13th to notch his second birdie of the round and that sparked a late burst with three more gains over the closing stretch.
“The main aim, everyone will tell you, is just to quality whether that’s 64th or first,” said Mullarney. “I didn’t really take many risks out there. it just added up to 67.”

At the penultimate hole Mullarney rode his luck but his powers of recovery are such that he was able profit from a kind break.

“I was actually quite lucky on 17,” he said. “I pulled it [drive] left then it hit the bank and pulled it back down. I had miles to go. I hit 3-iron to about five feet. That was against the head that one.”

With qualifying out of the way the focus switches to the first round of match play. After back-to-back rounds of 70, Conor Purcell is keen to maintain his attacking strategy.

“It’s no different,” he said when asked if his approach would change now he’s reached the knockout stages. “You’re just trying to make as many birdies as you can and shoot as low a score as you possible. It doesn’t matter who you’re playing, just shoot the scores. Try play your own game as much as you can.”
Purcell, 21, got off to a flying start in round two. He holed a 15-footer for birdie at the first and landed an eagle at the third when his 6-iron approach finished eight feet from the cup. His charge faltered when he bogeyed eight.

“Had a bit of a hiccup,” he explained. “Three bogeys in a row got me back to square one. A few birdies on the back nine. Kept it solid the whole way. Never really got out of control.”
Purcell picked up shots at 14 and 15 before relinquishing one at 16 where he took an unplayable when his ball landed in a bush.

“If you hit off the line, you take your medicine here,” said Purcell. “I kind of thought today could have got pretty low after the start. A little bit of a lapse in concentration in the middle, it got away . I hit the ball pretty similar both days and held a few putts which is always nice.”

With the first hurdle cleared, Purcell is that bit closer to the title.
“It would be huge,” he remarked when asked what it would mean to win the Close. “It’s still early days and a good few matches to go.”
First up for Purcell in Monday’s opening round of match play is Thomas Neenan, another of the qualifiers from the playoff.

Belvoir Park’s Marc Norton plays Peter Kerr in an intriguing all-Ulster round one clash. Norton added a 74 to his opening 68 to qualify comfortably, tied third on level par.
“To be level par after two rounds, I probably would have laughed at you if you had given me that at the start because it’s a very tough course,” said the 21-year-old from Belvoir Park.

Norton reached the semi-finals last year and this year’s tournament is his last event in Ireland before he begins his final year at Oakland University.

“It would be nice to sign off with a win here but there’s a long way to go yet.,” said Norton, who has struck form again after a frustrating spell at the start of the summer.
“I struggled big time when I came back from the States,” he revealed. “For a month and a half I was playing terrible. I just wasn’t hitting it good. I don’t know why because I played really well there in the spring. I missed the cut in the Irish Am and then the East, it was shocking. I started hitting it good at the North and then this week I’m putting good. I’ve been waiting on putts for a long time. I figured out something during the week which has helped a lot. I kept missing putts left so I just weakened my grip on the putter.”

To have hands on the trophy would be sweeter still. Two rounds down, three days to go, now only 64 players remain in the hunt for the last major of the season.