Fletcher added his name to an illustrious list of winners as he clinched the AIG Irish Amateur Close Championship at Galway Golf Club, edging Athenry teenager David Kitt by one hole.

Fletcher was visibly relieved after holing a short putt at the last to seal his win.

“Unbelievable,” was the first word that came to his lips when asked to consider what it meant. “I didn’t know how it was going to feel like but feels like a pressure lifted off my shoulders.”
After 14 holes, Fletcher was three clear but Kitt reduced the deficit with pars on 15 and 16 as his opponent stumbled.

“I didn’t really feel nervous,” Fletcher reflected. “Then the shot into 16, it was sitting up really nice, nearly too nice, and I just blocked it. I didn’t want to miss it left. It was a tough lie in the bunker and that made it a bit harder.”
A bogey at 15 having clattered a tree with his second shot was Fletcher’s first error of the match. Kitt took full advantage and capitalised again when Fletcher bunkered his approach on 16, leading to a double bogey.

“That was my first bogey on 15 and I think that maybe unsettled me for the next hole,” said Fletcher.
His lead still intact, Fletcher could have closed it out on 17 when Kitt missed the green but the plucky teenager scrambled superbly to keep the match alive.
Both players found the final fairway and with Kitt first to play, he went for the flag but his shot carried too far, and nestled in the rough just beyond the green. Fletcher had 155 yards for his approach and sent an 8 iron soaring through the sky, landing softly 20 feet beneath the hole.

Even though the odds were stacked, Kitt only had eyes for the hole as he lined up his chip.
“I thought it was in,” said the plucky 17 year old, whose ball finished inches from the hole. 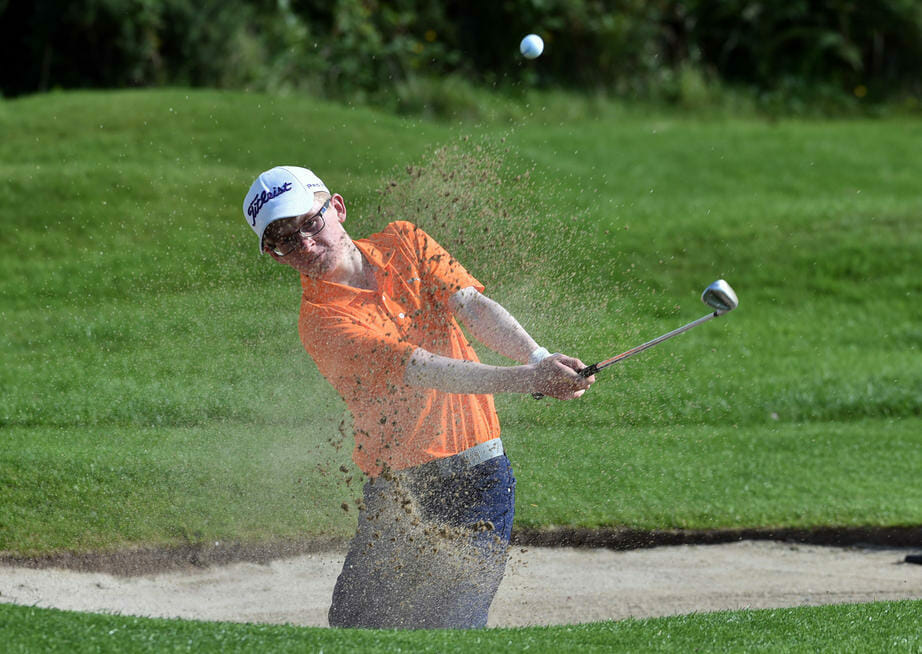 Fletcher was in charge of his own destiny now though his birdie putt was tentative, finishing four feet short. He paused for breath and felt the tension exhale when his par putt rolled smoothly into the cup, confirming his victory, and a sweet moment of bliss.

“I still can’t believe it,” Fletcher admitted, parsing his thoughts in the quiet comfort of the clubhouse.
“There’s a lot of people with the game, it’s just having the head,” he reasoned. “Before, if I made a mistake, I’d get annoyed. I just stay calm now.”
His temperament was certainly put to the test at 16 when it took two attempts to escape the bunker. A par-par finish was testament to the mental fortitude he had displayed throughout the tournament.

“I thought I closed out pretty well,” said Fletcher, who doubles as an instructor at Craigmore Swimming School, which is run by his father, Richard.

Winner of the North of Ireland Stroke Play in 2016 and a boys international in 2014, Fletcher flew under the radar this week.
“Yeah, big time,” he said when asked if he felt like an underdog. “Especially with all the internationals. I knew I had the game to beat them. Now that I’ve won I know that I can win again.”
Victory complete, he had the air of a champion.