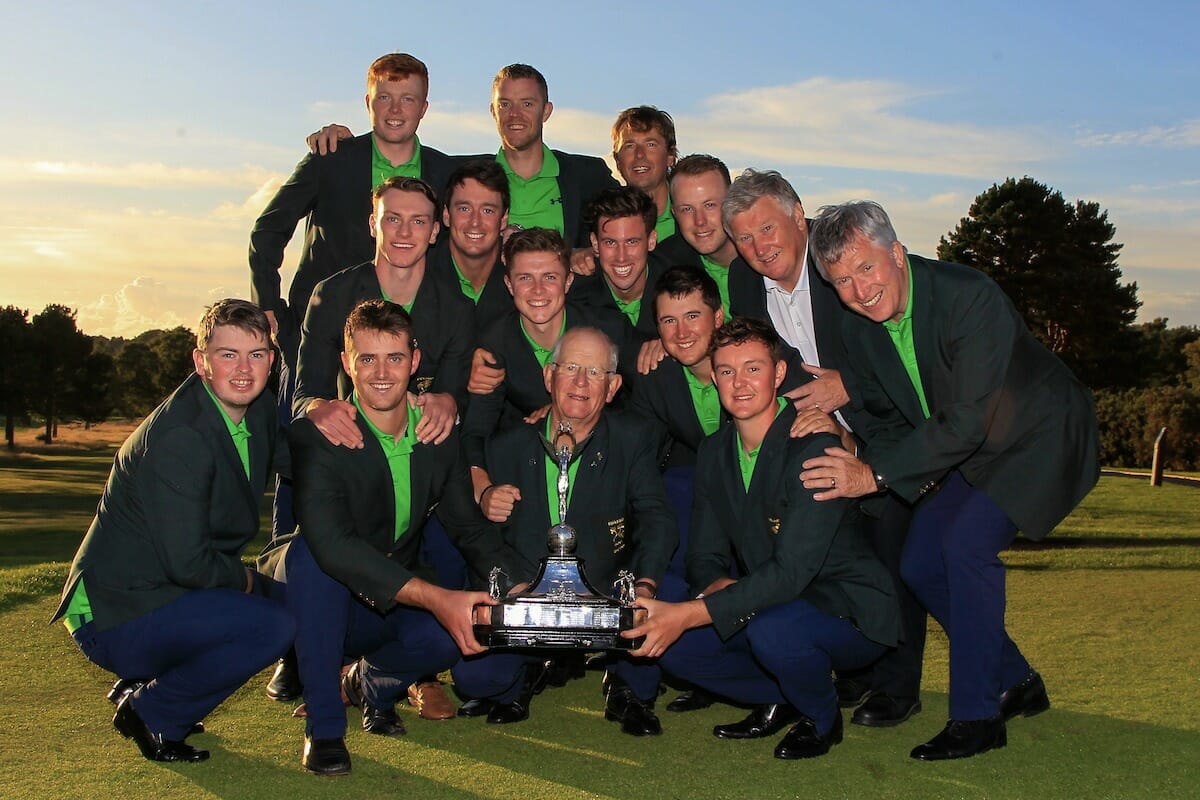 Ireland celebrated another success at the Home Internationals and made history by winning their fourth successive title.

No Irish team has gone this deep before. A tie with England on the final day at Moortown ensured that Tony Goode’s team collected the Raymond Trophy yet again, writing their names in the record books as the first Irish side to retain the title for the third year running.

Colm Campbell (Warrenpoint), John Ross Galbraith (Whitehead) and Robin Dawson (Tramore) have the distinction of playing on all four winning teams. Campbell has become Ireland’s anchorman and having delivered the decisive point in 2016, Campbell found himself in the same position again.

This time the situation looked bleak. Having lost the first four holes, Campbell went five down at the sixth against Jake Burnage.

“All I was thinking at that stage was making sure not to get a dog licence,” said Campbell. Having clawed back two holes before the turn, there was hope.

In fact he won three holes on the bounce – 9, 10 and 11 – to turn the match around. By now, things were getting tight for Ireland after a mixed afternoon.

A three-point haul from the foursomes gave Ireland an edge but England battled back in the singles. Matthew Jordan rescued a half against Paul McBride at the top of the order while Daniel Brown, Will Whiteoak, Josh Hilleard and Bradley Moore put more red on the board.

Conor O’Rourke, Caolan Rafferty and Colin Fairweather secured valuable points for Ireland to keep the four-in-a-row dream alive. When Alex Gleeson halved with Todd Clements, it meant that the outcome of the Campbell’s match would determine everything.

All square playing 17, Campbell knew that his side needed at least a half.

“I hit probably the best shot of my life,” said Campbell, describing his 6 iron approach from 192 yards. Three foot from the pin, his birdie was all but secure and when Burnage failed to save par from the bunker, Campbell went ahead.

That meant Ireland could not be beaten. More to the point, it meant that Ireland would be crowned champions.

“It was another special week with the lads,” said Campbell. “I know it came down to my match but everybody played their part. It really was a great team effort.”

For Tony Goode, it was his third time to lead a winning team at the Home Internationals, signing off on his Irish captaincy in style.