From debilitating injuries to Curtis Cup play and role model. It’s been a roller-coaster few years for Maria Dunne.

The most extraordinary thing about Maria Dunne is how ordinary she remains, and I mean that as the ultimate compliment. During my interview preparation there was a feeling that I already knew her. Grounded with an enviable sense of perspective, it was no surprise that I caught Maria Dunne on the phone as she juggled between packing for the team championships in Iceland and putting dinner on the table for her darling husband Bryan. In a world where so many go out of their way to be different, it was refreshing to chat to someone who was simply normal.

Maria Dunne has been playing golf ever since her Dad started bringing her and her siblings to the local Driving Range at Skerries from as early as eight years old. The family lived next to an eighteen-hole pitch and putt course that Maria would make her summer home each year. By eleven her game had improved and she prematurely graduated to become a Junior member at Skerries Golf Club. Unrelenting progress earned Dunne a call up to the Junior Irish team at 15 but it wasn’t until her Dad read about her current coach, Roger Yates, in a local paper that her golfing outlook changed.

“Everything”, she chuckled when asked how much was owed to the impact of Yates. “There was a time when I would’ve been satisfied with making the Home Internationals team… the Girls team, not even the Ladies side. Roger believed in me probably more than I believed in myself. You could see how proud he was to be coaching what he considered to be a real talent and his enthusiasm motivated me and spurred me on.”

The perfect partnership brought with it a new sense of ambition and results soon followed. Dunne claimed her first Leinster Ladies title at County Louth Golf Club when she was 19 and a first full Irish cap came with it.  People were starting to take notice. An offer of a scholarship made its way from across the Atlantic and with that, Dunne was soon packing up for Bethune-Cookman University Florida. An obvious decision? “At that time it was. There were no real programmes to compete with it in Ireland. But it wouldn’t be an essential route to go down today. You only have to look as far as Maynooth University and their golfing programme and the names it has produced. The likes of Stuart Grehan and Gary Hurley. It’s an incredible set up.”
“I’ve had to work hard but I enjoy it. I get through my own work outs at the local gym but also have the benefit of working with Robbie Cannon and the ILGU High Performance Panel”
Without that option, Dunne was making waves in Florida as a leading performer but what she learned on the fairways paled in comparison to what she was coming to understand about herself. “There was certainly a point in my life that I thought about turning pro. I probably went to America with that intention but I had just left school and didn’t know how the world worked. I discovered pretty early on that it wasn’t the life for me. Even at University I would look forward to coming home for summer and Christmas holidays more than anything. I didn’t mind going back to Florida but only because there was an end goal. I had made a commitment to them and it was an opportunity I was so grateful for but the idea of constantly being on the road and living out of a suitcase just wasn’t for me. And then came the injuries.” 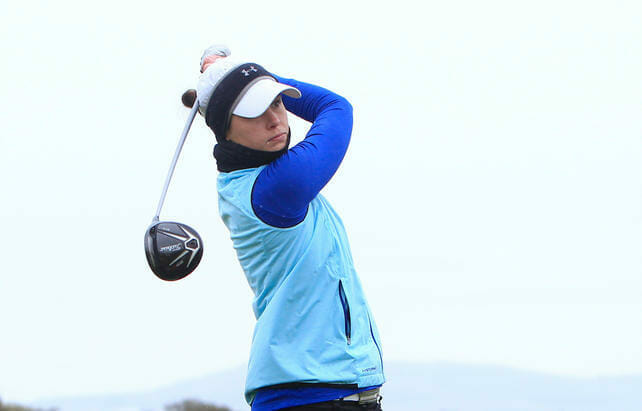 Maria Dunne went from having the golfing world at her feet to being struck down to her knees by an excruciating back injury that threatened to end her playing career and seriously inhibit her daily life. What started off as a niggle developed to the point of torture as Dunne’s discs would pop in and out with little warning. “Suddenly I was standing over a shot wondering whether or not it was going to hurt. You can’t play golf like that. You can’t play any sport in that headspace.” Dunne played through the pain whilst frequenting physios and chiropractors but having to withdraw from the Irish Strokeplay midway through the tournament at Elm Park in ‘08 was a severe low point.

“That was so disappointing. I had worked really hard prior to the tournament. I felt really good. My game was in the best shape it had been in for a long time. Anyone who knows me knows I would never pull out of a tournament but I knew I couldn’t do it.” The setback came just as her recovery was beginning to show rare signs of improvement but thanks to a wonderful support team around her, Dunne kept the faith. The secret to putting her dreaded injuries behind her? “The gym”, she beams. “I’ve had to work hard but I enjoy it. I get through my own work outs at the local gym but also have the benefit of working with Robbie Cannon and the ILGU High Performance Panel. I’ve always enjoyed dieting and fitness.

The girls probably think I’m crazy when I show up for practice with some of the things I eat but it works for me and sure it might rub off on them a little.”
Having been suffocated under a blanket of injuries for so long, Dunne couldn’t point to just one moment of revitalisation. Increased strength prevented injuries and her hard work began to bear fruit on the golf course. Not only was she competitive again but now she had a perspective forged through experience that lifted a certain weight off her shoulders. Indebted to her employers at Kinsealy Grange Golf Academy, Dunne acknowledges their support at every opportunity. Not only did she win the ILGU Scratch Cup Circuit in both 2013 and 2014, but she also married her husband Bryan. She had found a balance in life that was to provide the platform for the best stretch of her career to date.

“2015 was a big year. I never imagined I’d be playing golf in Peru and I actually appreciated just being there, something I would’ve taken for granted when I was in college. To finish second in the South American Amateur was unexpected but gave me a lot of confidence to take forward.” Dunne followed up with an impressive last eight finish in an elite field at the Spanish Amateur and suddenly dreams were becoming realistic targets. “The Curtis Cup was always the dream and my performances were starting to put me in the conversation. I had missed out on the Vagliano but just wanted to keep playing well and hopefully people would still be talking about me come selection time.” She went to the Irish Strokeplay at The Island knowing a big week could make all the difference, but despite her game being in good shape, things didn’t go to plan.

“It was frustrating. It’s one of my favourite courses. Having grown up in Skerries I knew it well and I have several friends around there. I just tried too hard. I was so focussed on the result that I put too much pressure on the score and it just wasn’t to be. I was very disappointed but when I thought about it, I knew I’d go home and Bryan would still love me and I moved on.” That emotional maturity took her to the Helen Holm Scottish Open, an event she’d previously missed to attend a close friend’s wedding. Knowing nothing less than spectacular would do, Dunne finished solo third despite a double bogey at the par-3 17th. “I guess I can laugh now but it was a six iron. It’s my favourite club. The one I’d pick up and smash at a target if I got a spare five minutes at work. I just hit a bad shot and did well to make five in the end.” Had she done enough?
“I remember a tweet coming through when I was practicing in Wales which said three Irish had made the team and I frantically thought, who’s the third? I’ll never forget it for as long as I live”

Dreams rarely come true but this one did.” Making a Curtis Cup team having been plagued by injuries for so long was one thing but being part of a winning side was quite the other. Dunne went to Dun Laoghaire not too familiar with the course but in familiar company. Not only was she friendly with Leona Maguire and Olivia Mehaffey, but she was to be partnered with Meghan MacLaren, a fellow student of long-time coach Roger Yates. “We are very similar in our ways, both on and off the course. Foursomes can be a tricky format but she was the perfect partner. It’s just easy with Meghan.” 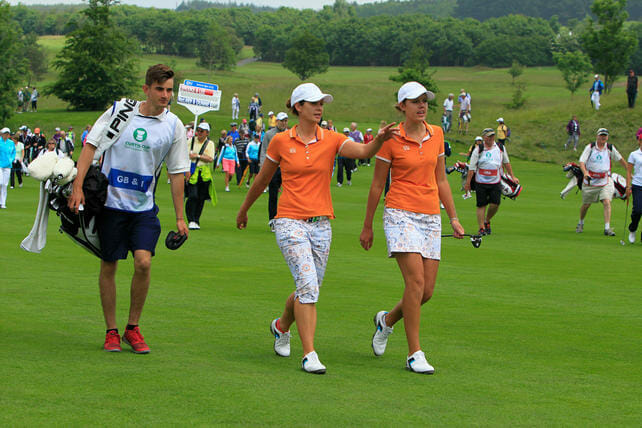 The pair proved formidable as team GB&I were too strong for their American opponents. Despite a narrow loss on day one having gone three up early in their match, the girls bounced back on day two to secure crucial points in their foursomes and fourballs matches. “To earn that first point was so special. I’d given Meghan too much to do on the 18th with a bad chip on the first day. I swear the ball was lying on a tee and I was afraid I’d go under it! But to respond the way we did and to see how the whole team played was just amazing. The response from the crowd was like nothing I’ve experienced before and even the reaction since from meeting people at the driving range has been quite overwhelming. They had a lovely banner made to welcome me back to work. You wouldn’t get that anywhere else. I really appreciated it.”

Maria Dunne may have come to the early realisation that the professional game wasn’t going to be for her, but even she couldn’t have envisaged such a glittering amateur journey. Lesser humans could be forgiven if they wilted under years of debilitating back trouble, but through her resilience, Dunne came through more formidable than ever. Her Curtis Cup selection is a shining example of courage and determination, but it’s the places she’s seen and the friends she’s made that Maria holds most dear. 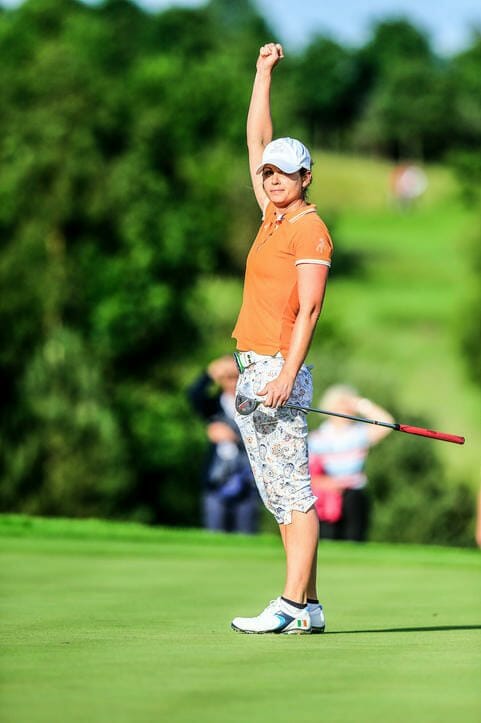 Her story is a timely reminder of the vast possibilities available to those who remain amateur. With the support of the ILGU, there are endless opportunities for girls to travel the world playing golf whilst pursuing other interests. Going forward, Dunne rules out ever turning professional but admits that apart from that, her future is uncertain. For now she’s happy playing the role model, but no matter what path she takes, she’ll have earned exclusive rights to the route.
“I’m grateful for everything I have. Not many people get to be a role model in life or their sport so I hope my journey can inspire future generations to take up this amazing game that has been so good to me.”