It’s been over two years since Niall Horan was involved in setting up Modest! Golf with Mark McDonnell and Ian Watts. Whether you’re a fan of his music or not,  there is no doubt that Horan is an influential and enthusiastic ambassador for the game of golf.

First impressions might suggest Horan is a young star enjoying the care-free, playboy lifestyle while taking time away from the day job. But that would be misinformed.

Be under no illusions, Modest! Golf isn’t a vanity exercise for Niall. Far from it. “Our focus is our players,” insists Horan from the off. “That’s who we need to concentrate on. This isn’t about me or anybody else. This is about our players. This is their time, their careers and we’re there to support them as best we can every step of the way.”

Every time I meet Mark (McDonnell) or Niall at an event my first question is always – Any Irish signings on the horizon ?
The answer was always the same, “We would love to sign an Irish player soon. To have one of our own would be brilliant but it needs to be the right person and we don’t want to just sign a player based on their nationality.

“Long term, we want to develop a small, very talented stable of players across all tours. We’re a boutique company and want to sign a small number of key talents and really support them on their journey so hopefully it’s only a matter of time before we sign our first Irish player.”

Well that time has now arrived and both Horan and McDonnell could not be more excited as I spoke to them last week about signing Lisa & Leona Maguire.

Finally, after over two years of prying I got to ask how excited the team at Modest! are after signing their first Irish player? I was corrected very quickly: “First two Irish players!” said McDonnell laughing. “It’s a very exciting time for both the girls and for us as a business.
What both girls have achieved in the amateur game is unbelievable and we can’t wait to help and support them in the next very exciting chapter of, their careers. It’s a huge honour for the girls to choose us to represent them. As you would expect they had a number of choices so we are very happy.”

Niall and his team at Modest! have helped introduce the game to new markets all over the world and make it more appealing to girls, ladies and a younger audience in general, exactly where the game needs to go. So was ladies golf always part of the Modest! plan?
“We never have had any desire to have a huge number of players on our books as we are very much a boutique company,” continued Horan. “We have always wanted a small Ladies division, however we had to wait for the right talent. Leona and Lisa are everything and more in terms of what we look for in a player.
“We’ve come a long way in the short two and a half years we’ve been around and for Lisa and Leona to choose us is very exciting. Their attitude, ability, work ethic and how they both carry themselves both on and off the course is exactly what we expect in a Modest! Golf player.” 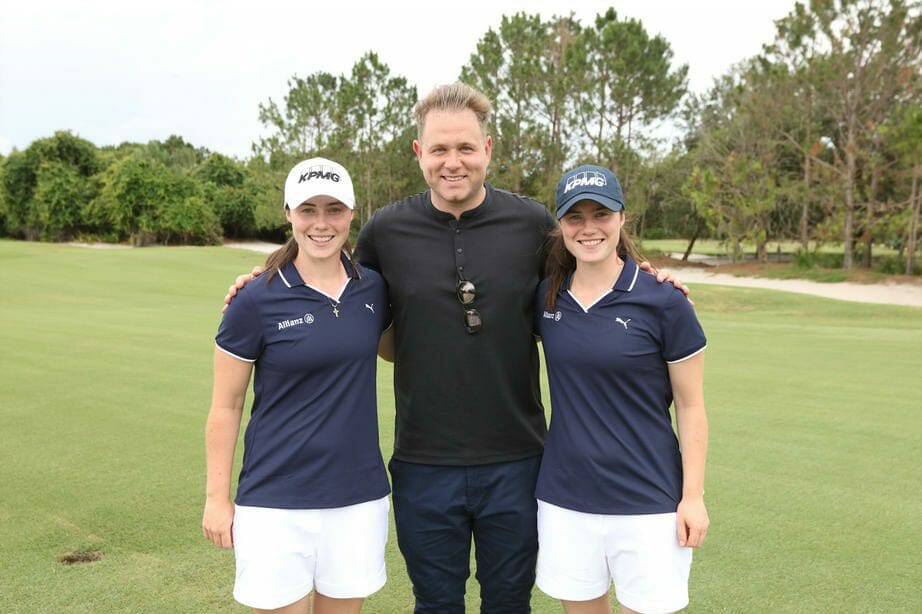 So when did the twins come onto the Modest! Golf radar ?
“They’ve been on our radar for a long time, however with the way the college system in the US works we’ve had to wait patiently before we were able to make any approach. It was worth the wait though!”

How important was it to Modest! To sign the twins as a package?
“I think it’s important to note we are delighted to sign both the girls in their own right,” said Horan. “Obviously lots of attention is on Leona right now after being world no.1 for so long, however Lisa is an immensely talented player too.

“Having made some major changes to her swing in recent years she is getting back to where she wants her game to be and we are looking forward to helping them both achieve the success they deserve in the professional game. I’ve been blown away by how hard Leona and Lisa work and that will show I’m sure in results as they move forward with their careers.”

Both Lisa and Leona will start their careers at the ShopRite Classic on the LPGA Tour on Friday before mainly focusing on the Symetra Tour where Leona has a full season exemption. Both will attract huge media attention over the coming weeks and the Modest! Golf connections will no doubt secure the girls more invites to main LPGA events than any other management company could have possibly guaranteed.

The power of promotion in the world of professional golf counts for a lot and Horan has serious pulling power. Just look at his social media accounts. On Twitter, he has 38.7 million followers. That’s more than six times as many as Tiger Woods, the most followed golfer on the platform. If his Instagram account was a country, it would be the 59th biggest country in the world. His Facebook followers would fill Croke Park more than 110 times over!

At the time of writing, both Maguire’s use Twitter as one of their social platforms. Leona currently has 2948 followers and Lisa has 1028. I can only imagine what these numbers will climb to in the coming weeks.
This feature appeared in the special edition Digital Edition of Irish Golfer on June 6th. Click Cover below to launch this edition with more exclusive features on Lisa, Leona and signing for Modest! Golf Management