First impressions might suggest Niall Horan is a young star enjoying the carefree, playboy lifestyle while taking time away from the day job. But that would be misleading. He has serious ambitions as he and the team at Modest! Golf just over one year in have already made the golf industry sit up and take notice of their “boutique management company”.

Whether you’re a One Direction fan or not, there is no doubt that Horan is an influential and enthusiastic ambassador for the game of golf.
This week Niall can be found at the NI Open at Galgorm Castle Golf Club making connections and networking as MODEST! Golf break new ground with a fresh twist on the familiar 72 hole competition format with the #ShootoutSunday
I caught up with Niall ahead of the NI Open to chat about his game, management and the new Shootout format at Galgorm this week.

You are just over a year and a half into golf management with MODEST!, How are you finding it?
It’s great and I am loving it. It’s definitely been a lot busier than I thought it was going to be so having Mark and Ian (the other two MODEST! Golf Directors) working on a day to day basis is unbelievable. We now have three players in our stable with Guido, Thirstin and Christian. We are all really excited about the year so far and hopefully the lads can get some wins under their belt.

Why did you decide to go into golf management initially?
I was involved with Drive, Chip & Putt at Augusta National last year and the quality of talent on show was unbelievable with 7-15 year-old kids, among the best young golfers in the world, taking part. And this is why I wanted to get into golf management – when you see raw talent like that. I wanted to catch them while they’re young because I want to be involved and at the forefront of the next batch of golfing superstars. If I can help in a small way to encourage more youngsters to pick up a club and try golf as well then great. Lots of people have a massive part to play and I’m only a very small cog in a much larger wheel. Golf is a cool sport and outside music it’s my biggest passion. It’s a bit of a jealously point for me too. If I was 19 years old and about to turn Pro I would be worried about getting management and one of our goals at MODEST! Is to really look after our players and make sure they have every opportunity to focus on their game and perform. 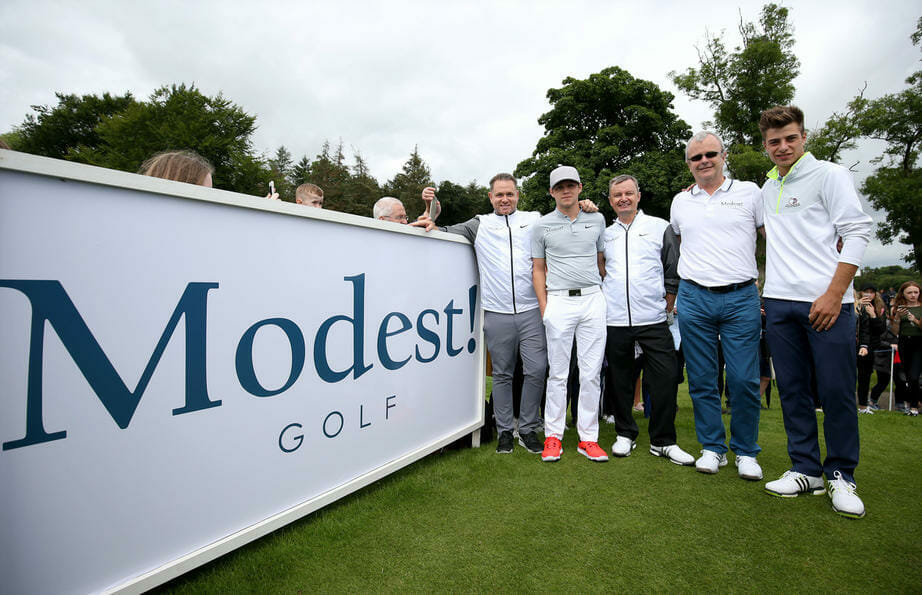 Being an Irish man yourself is an Irish signing on the horizon?
Absolutely. I would love to sign an Irish player soon. To have one of our own would be brilliant but it needs to be the right person and we don’t want just sign a player based on his nationality. We are monitoring the elite amateur circuit in Ireland and around the world constantly and there are a lot of great players coming through so hopefully it’s only a matter of time before we sign our first Irish player.  Long term, we want to develop a small, very talented stable of players across all tours and we have no aspirations to become a large management company. We’re a boutique company and want to sign a small number of key talents and really support them on their journey. The three lads we have signed are young, talented, ambitious and very hard workers. I always work off the motto of, ‘if you think you are working hard there is always someone working harder’. I try to emphasise this to the lads as there is nothing easy about the sport or music industries and you have to work so hard to be successful.

What has you so passionate about golf?
When I was a youngster I joined Mullingar Golf Club and I used to play as much as I could with my friends. We loved it. I’m obsessed with it to be honest. I watch an awful lot of golf on the TV too and I love all the stats and when they break down swings. I can tell you who’s top in greens in regulation, driving distance and stuff like that. I’m a bit of an anorak, but I find it all very interesting. I’ve got into it more over the past four or five years and appreciate it more. When I was on the road with One Direction it allowed me to escape the hotel for a few hours and relax. Harry and I used to play a fair bit and travelling so much has allowed me to play some amazing courses all over the world. It’s a great way to escape from everything for a few hours. 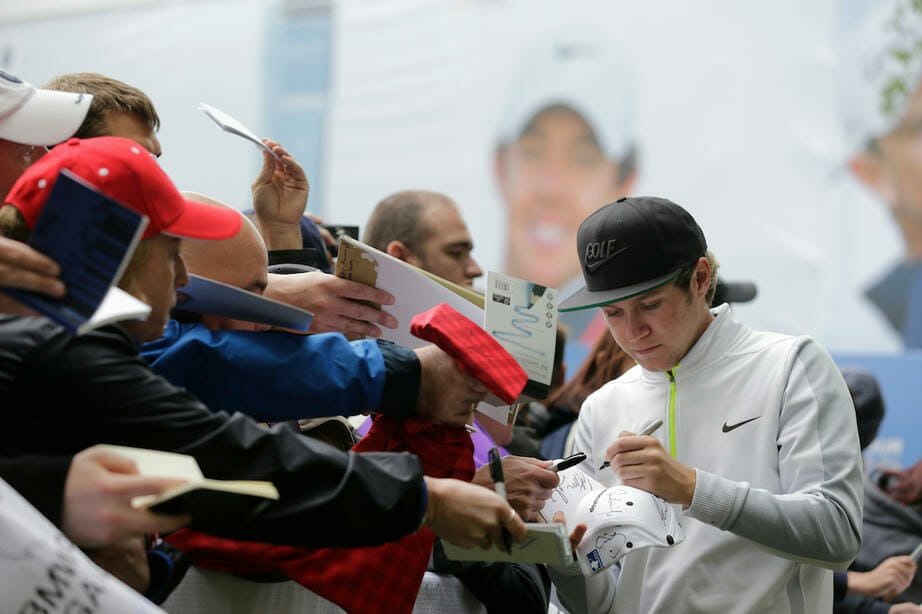 So how much do you actually play now?
Last year I was playing a lot more than I am now. I am averaging about a game a week now but mad to get out onto the course whenever I can. I plan on playing a lot of the top courses around Ireland while i am home now. I get asked a lot what are my favourite courses at home but the truth is I moved to the UK when I was 16 and have only really played a few of the top courses during the Irish Open Pro-Ams so outside Portrush and Royal Co Down I haven’t been to many at all. Even parkland wise it’s Galgorm the K Club and Mullingar. I can’t wait to get out and play the big Irish courses later in the season. Courses like The Old Head, Portmarnock and Ballybunion, I want to play them all.

How’s your own game at the moment?
I’m off nine now and can hit it fairly well off the tee which gives you confidence. I’m playing well at the moment and that’s all down to ripping my swing apart and starting all over again a couple of years ago. It’s definitely changed my golf and it’s all technique and understanding. Golf is the most enjoyable game in the world when you’re playing well, but can be the worst game on the planet when you’re hitting it all over the place.

MODEST! Golf are also involved in the NI Open again this year with a new format. How did that come about?
Yeah, that’s right – we were the official sports management partner at the Northern Ireland Open at Galgorm Castle last year. The chance came up to be the official sponsors this year and we were delighted to get involved. We had other opportunities at other events but we have a great relationship with all the staff at Galgorm and the crowds were huge so we wanted to grow on that for 2017. The new format is really fresh and the European Challenge Tour have been really good and receptive to a new company such as us. I think the concept is great with every match going down to the final hole on the last day. Even if you come down and you don’t know any of the players you are guaranteed to have a tournament that will be very exciting to watch right to the finish.
The NI Open is as close as you will get to a main European Tour event and we feel the new format for this year will make it hugely exciting. Outside the format, we will tweak the event a little this year too so it appeals to non-golfers as well and try to make it family orientated for spectators and the players. I’m really excited about it and can’t wait to see the new format play out, Shootout Sunday should be spectacular and it’s absolutely free to come down too. Just visit www.niopen.golf to register for your free tickets.

Round 1: 156 players begin three rounds of strokeplay
Round 2: 36-hole cut following close of play (Top 60 and ties)
Round 3: 54-hole cut following close of play (Top 24) to include play-off if required
NI Open Shootout Sunday: Five rounds of six-hole strokeplay matches
–              The top eight players after 54 holes of strokeplay will receive a bye into the second round of matches and will be seeded.
–              The remaining 16 players (positions 9-24) will be randomly paired for the first round matches.
–              If there are any ties for 24th position, a sudden-death play-off (18th hole) will determine the qualifiers after 54 holes.
–              The losing quarter-finalists will contest matches to determine positions 5-8 and the losing semi-finalists will contest a match to determine 3-4.
–              Any matches level after six holes will be determined by playing the 1st hole (rounds one and two) or a shortened version of the 18th hole (quarter finals, semi-finals and final) as a sudden-death play-off hole. 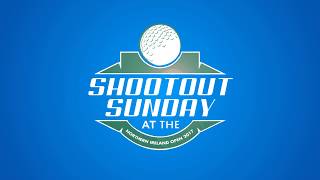