The tendrils zig-zagged across the grass, all thin, white and jagged. It looked like forked lightning had decided to use the 7th green at Ballyneety Golf Club as a canvas. I was looking at what an actual lightning strike does to a green – it’s a fascinating sight.

It was 2014, and Ballyneety had been resurrected as a golf club. Perhaps that lightning strike was a sign of the club’s rebirth?

If you haven’t heard of Ballyneety, it is located 11 km south east of Limerick City. It opened in 1994, and was called Limerick County Golf Club back then. It boasts a lovely moving landscape and woods abound. It was the perfect setting for a golf course and the original owners/investors/developers – call them what you like – set about creating something special. I first visited the club in 2008, and thoroughly enjoyed my round. Not only was the course in immaculate condition but everything felt perfectly placed.  My review in Hooked was gushing.

Large quantities of trees had been planted and their positioning was excellent. That is not an easy thing to accomplish and there are many courses where trees are just stuck in the ground in long, thick lines, their only objective to divide fairways. Not so, here… here everything is sympathetic to its surroundings.

Hole shapes, green shapes, bunker shapes… they all knitted together to give the course a delicious structure and rhythm, and the maintenance was sublime. I was enchanted by a club I had never heard of.

Unfortunately, the wheels came off for Limerick County in 2011 and the course was let go. As nature began its reclamation process new investors stepped in… and just in time. Liam Lawlor, the General Manager of today, and a long time member, told me that if the fairways had remained overgrown for another 6 months, relaying them would have been obligatory. There are shades of Rathsallagh here, and also Kilkea Castle, which re-opened in July.

Sometimes I feel clubs play on their history a little too much. For Royal County Down, Royal Portrush, and Portmarnock it is no surprise and gives golfers a valuable insight into their pedigree… for others it is remembering glory days that have now gone. At Ballyneety, the history is important: it is a tip of the hat to the individuals (Liam Lawlor, Minie O’Brien and professional Donal McSweeney, specifically) who dedicated themselves to saving the course/club. It also encourages golfers to appreciate the efforts put into a course that was almost lost.

All the same, when Liam said it was time to move on and stop dwelling on earlier events, he had a point. This is not a world famous links with a design by Old Tom Morris or Alastair MacKenzie. The club was a young child with ambitious parents who gave it clothes that were far too large for its age. Now, as Ballyneety Golf Club, it has grown into those clothes and is far happier to be seen out in public.

On my recent visit, Liam directed me past Donal McSweeney’s impressive golf academy and driving range (opened in 2013) to a small car park. A gate leads down into the woods. This is the start of a 5.6 kilometre walking track that runs through the golf course and can be used by members and the wider community. It is just one of the extras, one of the services to be provided by the golf club as part of an ongoing initiative to embrace the community. With so many clubs trying to find ways to attract locals into the clubhouse bar and restaurant, Ballyneety has already stepped ahead… with further plans to build a 5-a-side football pitch and a community centre. 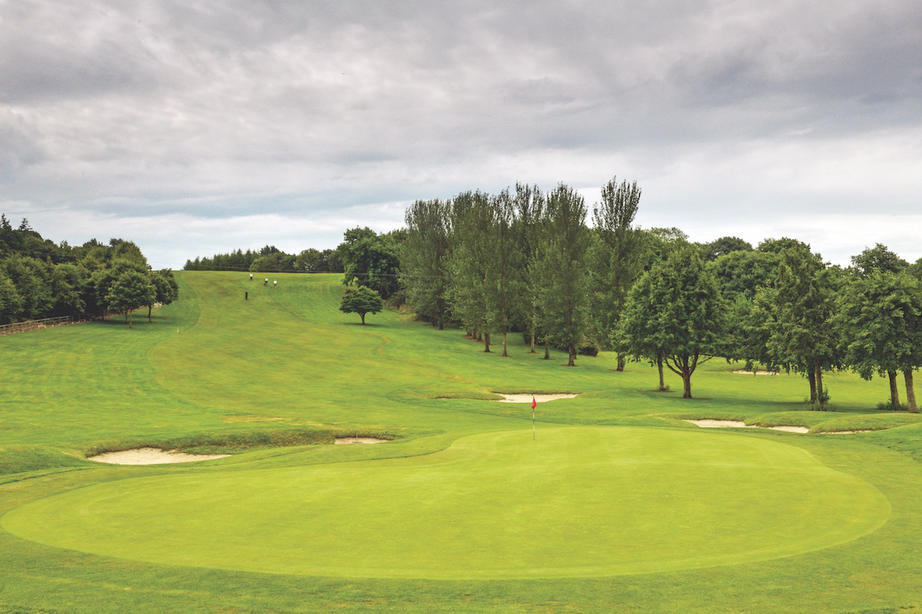 The Golf Course
Ballyneety designed by Des Smyth and it is particularly strong off the tee with some long holes offering options. Yes, you can step up and smack it, or you can back off and play more cautiously. In other words, there’s lots to entertain.

There have been some tweaks under Ballyneety’s reincarnation. Four greens have been re-turfed and some bunkers have been removed, but that’s about it. The big par four 18th was shortened and a short uphill par four that ends under the clubhouse’s large windows is now in place. Other than that, the structure, the rhythm and the thrills remain the same… although those lightning tendrils on the 7th green are long gone.

The maturing trees and woods have enhanced the shape and individuality of holes (3, 4, 9, 16 and 17 especially), allowing the feature trees (young and old) to stand out.  They are the constant… a backbone if you will.

The course, stretched over 183 acres, can be divided by its two nines: the front nine has the hill at the heart of its excitement; and the back nine is a more level, but far wetter affair with ponds, streams or ditches appearing on every hole except the 18th. The front nine is a par 35 of 2,695 metres (White tees), while the back nine’s par 36 measures 2,760 metres. At Par 71 and 5,455 metres it is not, therefore, a long course. The Ladies also play it as a Par 71, of 4,504 metres.

The greens deserve a special mention. The putting surfaces have some significant slopes and tiers – the 7th is the pick of that bunch – and many are shaped like broad-waisted figures of eight. There are even some where if you find yourself in the wrong figure-of-eight ‘loop’ you will have to putt over the fringe… or worse. You will need a strong day with your putter to score well, that’s for sure.

The par five 4th is a quick and sharp dogleg right and as you round the bend the fairway starts to rise to a green well above you. After a gentle, level start the hillside holes have arrived. The 5th piles over the top, dropping even faster than the 4th rose. This is the longest par four (393 metres) and it is Index 1. The hole may be straight but the tee shot is blind and, as much as you’ll want to smash the drive, it is worth considering that if you go too far you could end up with a nasty downhill lie. Better to play short and leave a towering approach shot to the green far below. (I recommend you walk down the path on the right of the steep hill.)

The 7th is an intriguing hole – lightning strikes aside – as it is just 256 metres, doglegging slightly left. It is all uphill through a narrow neck of trees and mounding, and many will want to smash their drive. It’s not worth the risk, believe me. That said, leaving yourself too short will make it hard to gauge the long, three-tier green above you. Decisions, decisions. I hit three iron and a half wedge, thinking I’d be putting for birdie. I was, but it turned into a three-putt I’d rather forget… so thanks for reminding me.

The short par five 9th offers another towering drive as you play back to the clubhouse, with the countryside rolling into the distance. You’re now leaving the hill behind you and the back nine promises a more sedate pace.

The back nine may have the watery holes but it’s not a threat like it is at Palmerstown Stud or Druid’s Glen. Only on 13 and 17 will it make you nervous. At Ballyneety, the water features are more about charm and colour which boost the character of holes on this gentler terrain. You will have more scoring opportunities here.

The 12th is my favourite hole after the turn. It’s a short, straight and tricky par four with the flag looking oh-so-alluring just 314 metres away. Play cautiously and you will avoid the water on the right and also leave yourself a full shot to the small green. It is a hole that tempts you to make mistakes.

The par fives on 11 and 14 offer birdie opportunities if you navigate the doglegs effectively, and while the 14th is one of the more testing holes, courtesy of the dogleg and a tricky green, it is really only the par four 17th that should cause problems. Here, the land is flat, the flag is visible and the hole is 348 metres… and yet it is Index 2. The green sits at an angle (twenty-to-two on the clock face) behind a pond, which makes your second the most exacting approach of the round.

Overall, there are perhaps too many short par fours and short par fives (the longest is 457 metres off the Whites) to attract big hitting members looking to be tested but the flip side promises birdie opportunities aplenty. And besides, this is a members club where golf is to be enjoyed. The members even come out to help maintain the course – they have a ‘Divot’ Night, where members repair the divots and then retire to the bar for a drink or two. It sums up the spirit of the club rather well.

I enjoyed Ballyneety Golf Club immensely. ”We’ve achieved a huge amount in a short space of time and will continue to invest and move it forward” says Liam. ”It is very much a members club. We have no entry fee and so we work hard to keep members. Our bar and restaurant are community focused and are always a hive of activity because all are welcome here.’

This article is taken from the October edition of Irish Golfer Magazine.