Chasing the Slam – Can Rory create history at Augusta 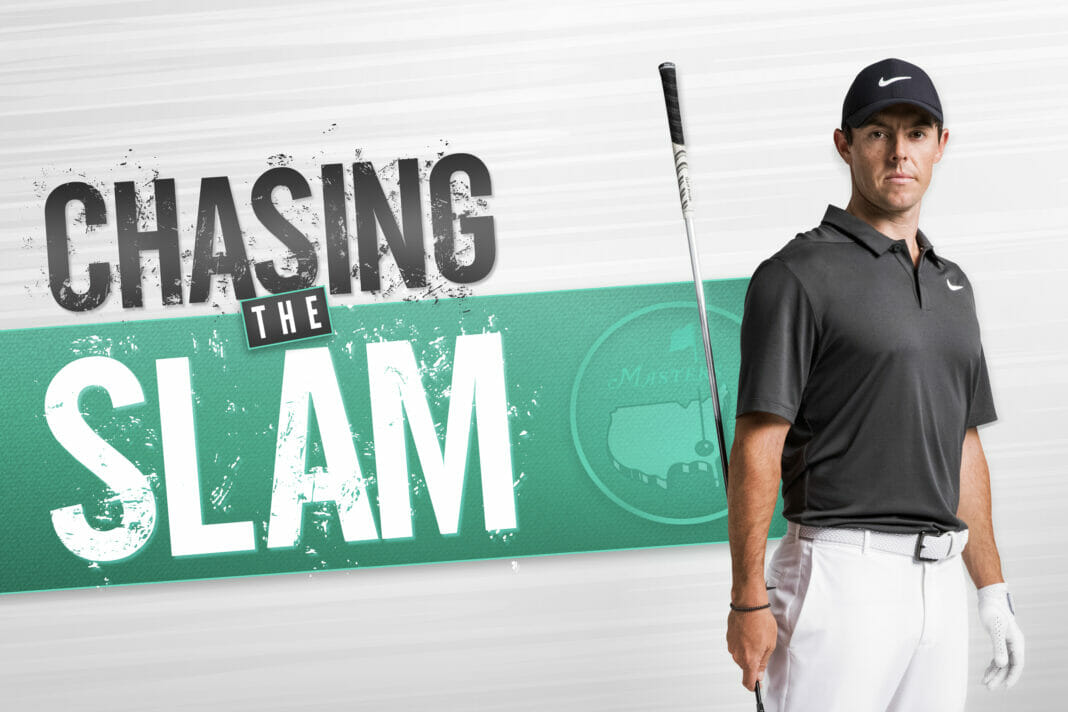 Winning Arnold Palmer’s tournament at Bay Hill clearly meant a lot to Rory McIlroy. It was his first taste of success in 18 months but more importantly perhaps, it should give him an extra dose of confidence as he drives up Magnolia Lane for the tenth time to play in the one major he has yet to win.

If there is one thing about McIlroy it is this: when he feels confident about his swing and his putting stroke, he is almost impossible to beat. That was never more evident than on Sunday at Bay Hill.

Plagued by injuries over the last year, McIlroy was forced to watch on as a new generation of stars have eased past him in the World Rankings. After an extended winter break in which he has regained full fitness and claimed his first win in 18 months he has some lofty goals to focus on, most notably chasing the career grand slam at Augusta National.

Since Rory won his fourth major, the 2014 Open at Hoylake, Jordan Spieth has won three and Dustin Johnson, Henrik Stenson and Justin Thomas have gotten off the mark.

Last April, McIlroy married his fiancée, Erica Stoll. Either side of that occasion, he signed a humongous 10-year apparel contract with Nike and another ridiculously handsome deal to play TaylorMade equipment. Off the course, everything is great. On it, 2017 was the worst year of his ten year career.

A rib injury sustained in South Africa at the beginning of last year led to him being side-lined for two months, disrupting his preparation for the Masters. The ongoing fall-out from that problem led to him ending his season after just 18 tournaments. Speaking before his extended break, McIlroy said, “These three months off could give me the foundation to have the next 10 years be even better than the 10 years I’ve had. Hopefully, that turns a great career into one of the greatest careers.”

The rib injury was also coupled with a full equipment and ball change. When McIlroy left Titleist and signed his enormous Nike contract in 2013, it took him almost a year to win a tournament of any sort. The naysayers had a field day, accusing him of stupidly switching sticks because he was more interested in money than majors. Within a further nine months, though, he had won two more major championships. Getting accustomed to his new TaylorMade gear has clearly taken time, but if he were to win at least one major this year, with the equipment familiarity process complete, he would be right back on track.

This is the fourth season that McIlroy has started off with grand ambitions of trying to win the Masters and he is not shy about sharing his long term goals.

“My first goal is to win the Masters, for the career Grand Slam, and then try to become the best European golfer ever; try and surpass Nick Faldo [who won six majors]. Then, if I had a career goal, it would be to be the best international golfer ever. Gary Player has nine majors. I’d like to think I’m going to give myself a chance to get close to that tally.”

McIlroy is the only European golfer to complete three legs of the Grand Slam. He has two USPGAs (2012 and 2014), a US Open (2011) and the Open (2014). If he wins at Augusta this month he will become only the sixth professional golfer to complete the deal. But pressure comes with that; pressure that has been there on his past three visits to the Masters when he has driven down Magnolia Lane knowing this could be the week he joins Messrs Sarazen, Hogan, Player, Nicklaus and Woods in that ultra-exclusive club. As he admitted last year – “I am a complete prat in the week leading up to Augusta. It’s a stressful situation.” He also conceded, “I’d love to say my life is already fulfilled, but there’d be a tiny piece missing. Yes, I wouldn’t be fulfilled if I didn’t get a Green Jacket.” The pain would, of course, be all the greater for him having squandered a four-shot final-round lead there in 2011.

With 2011 now a distant memory for McIlroy we asked him a few questions about his Masters preparation and his outlook for the season.

IGM: How much is a potential career grand slam at the Masters on your mind?

That will be on my mind until the deed is done! Joking aside, there will always be a lot of attention and hype around any golfer trying to put the final piece of the career grand slam together. There is a certain emphasis on me this time of year because the Masters is the season’s first major, because I almost had one in the bag, and because the course sets up so well for me. While each year is a new challenge, I can’t really prepare much differently than I have in the past.

I’ve decided on a busier schedule in this year’s build-up, mainly because I had no competitive golf since the autumn of 2017. After my break at the end of last year, it’s been important for me to put in some good performances before the Masters.

As ever, though, I’ll just keep working on the parts of my game that need to be sharper and hopefully I can bring a confidence and belief to Augusta that will have me in the mix come Sunday.

IGM: Has your game plan changed much year on year with the experience on how you approach Augusta National?

No, I don’t think my preparation has changed for the Masters over the years. But that’s not to say I don’t learn from each year’s experience or try and play the course a couple of times before the event to see if there are tweaks since the previous year. I’ve always been comfortable from tee to green around Augusta but it’s taken me a few years to figure out the greens, and figure out where you need to miss it.  After missing the cut at the Valspar a few weeks ago I travelled down to Augusta to play a few practice rounds. I played with Jeff Knox who I have played a good few rounds with since he was my amateur marker in 2014. He’s probably the best putter I’ve ever seen on Augusta’s greens. Knox holds the course record from the members tees (61) and shot a 70 in 2014 playing with Rory on Masters Saturday (Rory shot 71!!). My dad and my manager, Sean O’Flaherty joined us. Jeff and I had a little rematch but there was no way I could win as I gave him way too many shots. I gave him eight shots (laughing), but we had a great two days up there. It was a nice two days to re-familiarize myself with the course and work on my bag set up for the week.

IGM: 2018 will be your 10th Masters appearance. What are your first Masters memories?

My first memories were being allowed to stay up and watch Sunday night’s coverage with my dad when I was six or seven. But what stuck in my mind most was Tiger’s 12-shot win in 1997 – it was around this time when I really began to consider golf in a serious way. Fast-forward to 2009 and I earn the right to play in my first Masters at 19. Memories of that first drive down Magnolia Lane will never leave me. It still feels surreal. I’m proud of my finish that year of tied 20th.

IGM: What is your favourite hole at Augusta National?

All the holes have special features and nuances at Augusta, but I’m most impressed by the 13th. I love its risk and reward nature and it’s a potential opportunity after the dangers of 11 and 12. It’s here where I feel the round’s final third can be kick-started. A good drive opens up a second shot at the green. But there’s Rae’s Creek to watch out for and a very slick, sloping green. It’s a great hole.

IGM: Do you feel under more pressure to perform now, given the heightened level of competition, than say five years ago?

There’s no question about the extreme competitiveness in today’s game, and pressure naturally comes with that. Of course, there was tremendous depth of talent five years ago, too, but the change for me in recent seasons is down to the reduction in multiple winners on Tour, even in the majors. It appears that there are just so many potential winners at each event now that it is increasingly difficult to visualise the same winner week on week. I do like to think that I will be the one being chased by the pack again, but I’m under no illusion and my game will have to be at its very best to achieve that.

IGM: Now that you’ve settled into a new driver and a new putter, how confident are you in your game and your equipment heading into Augusta?

I’m very confident in my equipment and in my game heading into Augusta. Obviously, the win at Bay Hill validated that. I felt like my game was in good shape, but I needed to show some signs of it before heading to the first major of the year. Putting so well and driving as well as I did are two really key things that you need to do at Augusta, so to have that part of my game and my equipment basically set, I can just go about trying to prepare the best way I can to play that golf course, knowing that I’ve got everything I need to play well.

IGM: What will your bag setup be for Augusta?

More than likely for Augusta, I’ll use driver, 3-wood, probably 5-wood – all M3. I put the 5-wood in before Bay Hill instead of the 2-iron. Sometimes at Augusta with those par 5s, you need to come into those greens with a little more flight to get it to stop a little quicker. So I will probably keep the 5-wood. That means I will probably lose the 3-iron and go 4-iron through 9-iron in the Rors Protos (the 730s) and then I’ll have four (MG) wedges. I think Augusta (if the conditions are like they usually are) will get a little firmer as the week goes on and you start to get a few more wedges into greens, and I think just having that extra wedge in the bag to fill that gap could be quite important. So that will be the setup for Augusta. Oh! And the putter. That’s pretty important around there. This thing’s not going anywhere, that’s staying in the bag for a while.