The US Speedgolf Open benefitting Honor flight of the Ozarks concluded last Sunday at the Horton Smith Golf course in Springfield, Missouri with Ireland’s Rob Hogan coming out on top. New York based Lauren Cupp took the Women’s trophy.

Hogan started the final round in 4th place behind Japan’s Joe Matsui, hometown player Nic Goodin and defending champion Jason Hawkins from Kentucky. The Horton Smith golf course, named after the first Masters Champion is known as one of the fastest on the Speedgolf Tour (Scott Dawleys World record was set there) and Hogan went out fast to try and take advantage of the relative flatness of the course.

‘My goal was to run 29 minutes which is a fairly lofty goal and that got me pumped up. I just got in a very strong frame of mind and as soon as I hit my first tee shot I launched an attack on the course as best as I could.

‘It feels unbelievable to win. The three tournaments I was lucky enough to win in Europe I was leading after day one so I spent the night with a different feeling. So you’re defending the lead thinking this or that could happen and what score you need compared to everyone else.

‘I was four behind so I just set myself that goal and got into a great rhythm and an attacking mindset which is the best frame of mind for golf. You’d always pick to be leading because your odds are better. It’s weird I knew I had a good round but wasn’t sure of the result but I was happy with whatever the result because I knew I gave it 100%.’

His efforts were rewarded and his score of 111 (78 shots in 33 minutes) was enough to climb into pole position and become US Open champion. Nic Goodin held on to 2nd place and Scott Dawley of Texas jumped into third place courtesy of a dream start of eagle, birdie ,birdie. The event was run by Speedgolf USA and Horton Smith head Pro, Garrett Holt who is himself a nationally ranked Speedgolfer. 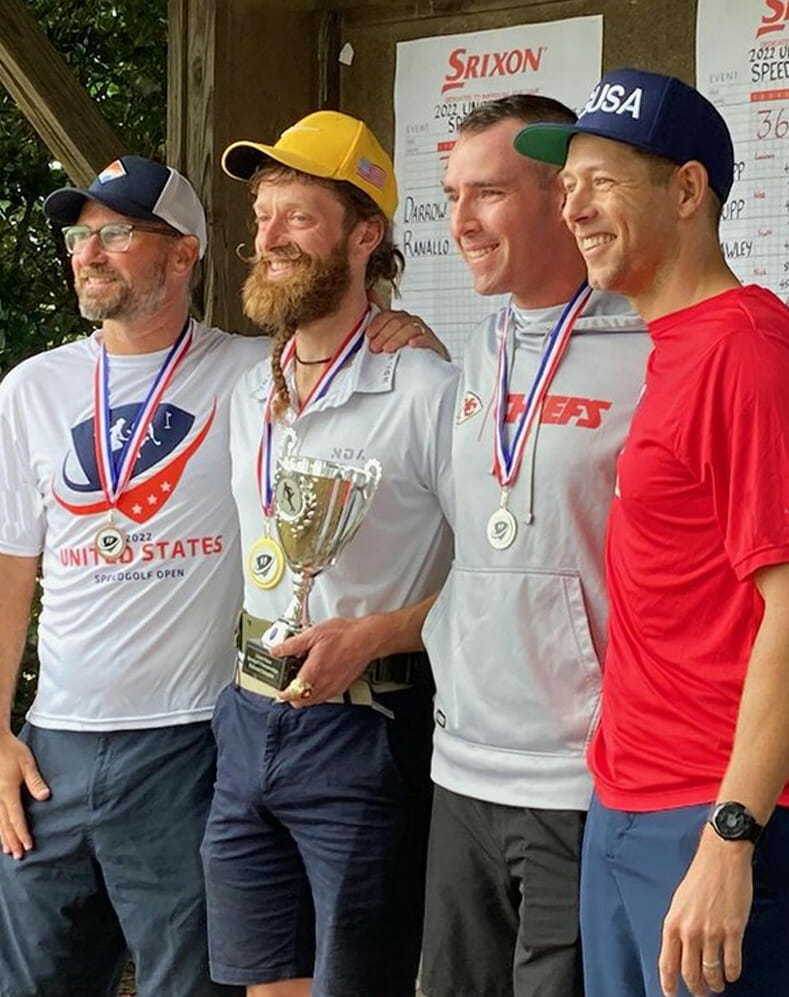 Garrett said that, “the course was in it’s best shape ever” and that “it had been fantastic to welcome many of the worlds top Speedgolfers to Missouri.”

2022 has been a breakthrough year for the sport of Speedgolf with events happening all over the world and Hogan has re-emerged as a huge force in the Speedgolf movement and now holds four national titles, Ireland, British, French and USA, all garnered in the last 6 weeks.

Sponsored to travel to these events by Hard Metal Machine Tools, Bray, the two time world champion has built a reputation as an innovator. He was the first player to use one handed putting while holding the bag in Speedgolf and his special Handle golf bag made him the fastest player of the last decade. This year has seen him introduce an even more radical measure and the ‘Hogan Holster’ engineered by his father Ewan in 2014 was debuted successfully in California this April.

“The Hogan Holster has created a lot of interest in the Speedgolf and even the Golf world and I am inundated with people wanting to try one. As a result I am working with a designer in Chicago from the Tuff Lie Golf Company to get a final production model ready to go.”

All focus now moves to The World Golf Village, Florida in mid-November where the hugely anticipated 2022 Speedgolf World Championships will be played.