Irish American Partnership Ambassador and decorated Irish golfer Leona Maguire announced the award of $20,000 in grants to four local primary schools to coincide with her participation with the KPMG Women’s Irish Open.

The 2022 Women’s Irish Open marks the first-time women’s professional golf was played on Irish soil in ten years. On the heels of her best ever major finish, Maguire provided an incredible performance to finish the tournament, and thanks to her, local school children have been inspired. In honour of Maguire’s participation, the Irish American Partnership proudly presented grants to Scoil na Maighne Mhuire, Ballycar National School, Stonehall National School, and Clonmoney National School all located in the local Newmarket-on-Fergus parish.

While down in Clare this past week, I was delighted to make a donation of $20,000 alongside the @Irishaporg to four local schools.
I hope these grants will continue to help support & inspire the next generation. pic.twitter.com/k7arvQTJBv

“These grants will be used to purchase resources for the schools,” Maguire said. “I am so delighted to award grants to four primary schools in this area as ambassador with the Irish American Partnership. We are committed to supporting young people across Ireland’s education pathway and look forward to doing all that we can to support more schools in the near future.”

“Sincere thanks to Leona, and all involved, for the extremely generous donation to our school, we are very grateful,” said Principal Mary Warren of Ballycar National School. CEO Mary Sugrue said; “We are so proud of Leona’s association with the Partnership and her incredible accomplishments. Today, we are pleased to support local schools near Dromoland in Leona’s honour.” 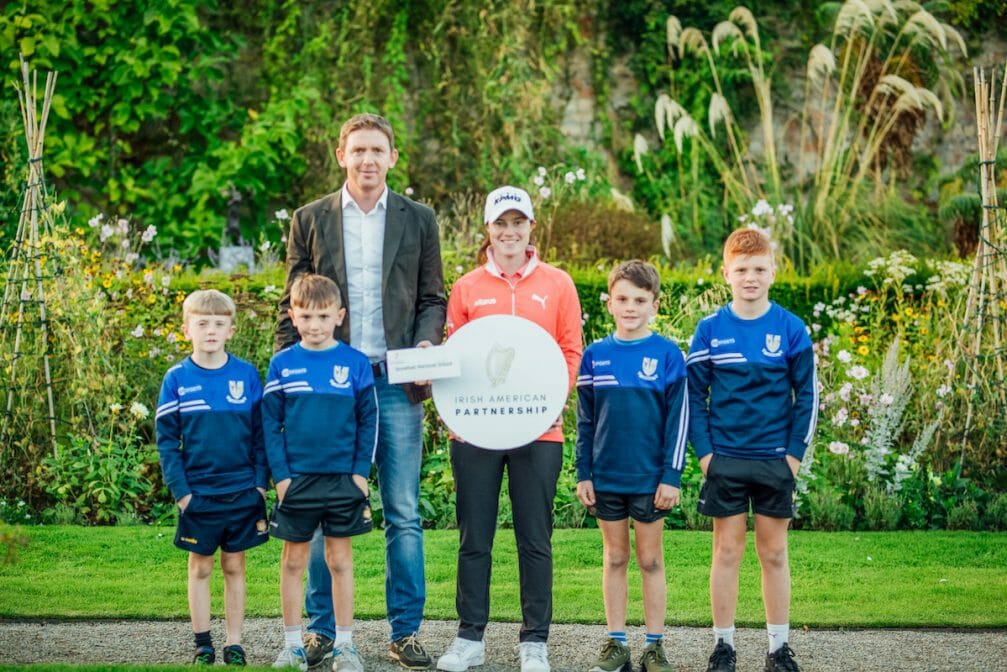 Maguire teed off her Irish American Partnership ambassadorship at a launch event in her native Cavan last month. The charitable partnership was born out of a mutual commitment to empowering the next generation of Irish leaders through education. In her capacity as ambassador, Maguire will champion the Irish American Partnership’s mission to educate and inspire, specifically its efforts to ensure schools across the island have adequate resources through its hallmark O’Neill Direct Grants to Schools program.

In addition to the four schools announced today, seventy-five (75) schools across the island of Ireland have seen $290,000 in funding as part of the Partnership’s 2022 grants under the initiative to date. With Maguire aboard and thanks to the continued generosity of its committed donors on both sides of the Atlantic, the Irish American Partnership is committed to providing a further $1 million to schools over the next four years.