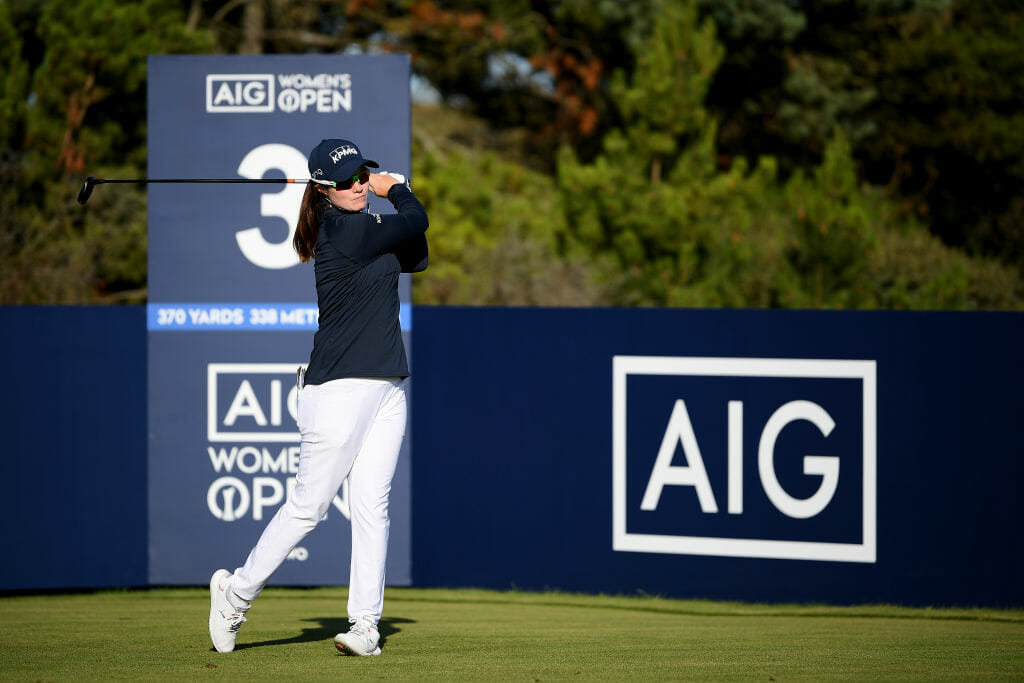 Leona Maguire will head into the weekend at the AIG Women’s Open Championship just six shots off the lead after a birdie blitz at Muirfield has her within touching distance of the lead.

The Cavan woman picked up birdies at the 14th, 15th and 17th to card a two-under 69 in her second round at the Scottish links to move to two-under-par for the tournament.

That has her six back of leader In Gee Chun, the Korean taking a one-shot lead into the weekend at eight-under-par as she looks to win her second Major title of the year after claiming the PGA Championship.

Despite being out in the tougher conditions in the morning wave on day two, Maguire battled bravely and picked up an eagle at the par-five fifth following a bogey at the par-three fourth.

Bogeys at the 11th and 13th dropped her over-par for the day, but her strong finish has her in an excellent position to make a run on moving day at Muirfield.

“Yeah, feeling good. It was nice. Three-under the last five is really good momentum heading into the weekend and right where I feel I should be and I’m looking forward to the weekend,” said the Slieve Russell star, whose best finish at an Open is 13th at Carnoustie last year.

“I think you can get frustrated. When I got plugged up a bunker on 11 and just sort of hung in for the back nine and kind of just had to take your chances where you get them.”

The woman she, and the rest of the field, are chasing is Chun, who opened up a slender advantage with six birdies and one bogey in a five-under 66 to move up to eight-under-par, one clear of Ashleigh Buhai and Madelene Sagstrom.

The Korean is a three-time Major winner already, and has one on her card already this season after triumphing at Congressional Country Club, but she is still looking for more over the weekend not just so she wins the tournament but also to win a bet!

“Before I started the tournament, my caddie Dean and I talked about the course. And after that, we had a little bit of betting, our game. If I have a bogey-free round, he said he’s going to buy dinner and pay me like $100 for each day if I can make it!” she revealed.

“So before I start my round, I always like setting another goal to have a bogey-free round. I think that mindset has helped a lot on the course. But I hit two bogeys the last two days. But I want to keep trying to make bogey free round the next two days.”

Three birdies in her last four holes led to a 66 for Swedish star Sagstrom, last year’s runner-up, which has her one shot back at seven-under-par alongside South Africa’s Buhai, who had an eagle, five birdies and a bogey in a 66 of her own.

It wasn’t to be for Stephanie Meadow, however, as a disappointing back nine saw her miss the cut by three shots as a one-over 72 meant she finished her tournament at six-over-par.

The Galgorm touring pro had brought herself back into the mix with birdies at the par-five fifth and par-four eighth, but a bogey at the par-three 13th preceded a double-bogey one hole later, and despite renewing her hopes of making the weekend with a birdie at the par-five 17th, a closing bogey dashed it.