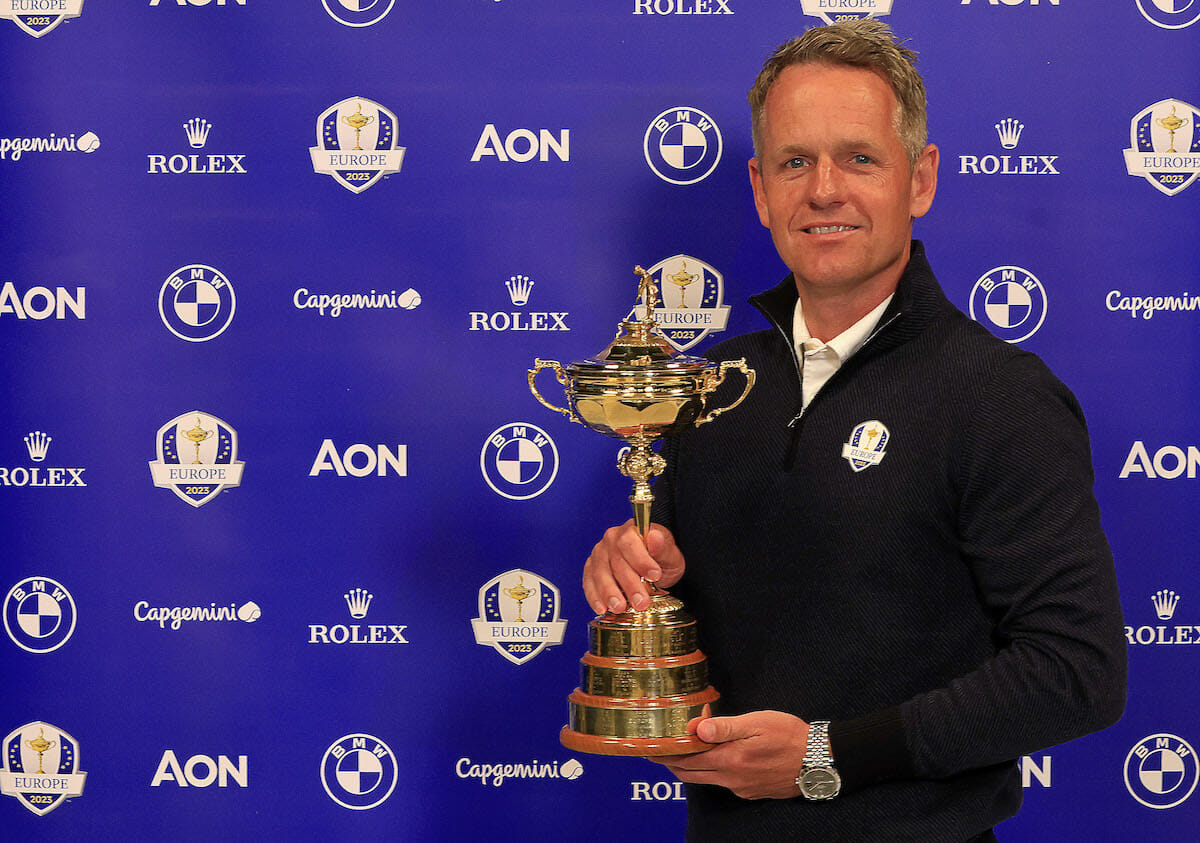 “See you in Rome!” was Luke Donald’s defiant response to any suggestions he may face the same fate as Henrik Stenson should the Englishman be a second straight European Team captain to break his Rome contract.

Donald stood proudly on both front feet fending off such a question at a Zoom conference he hosted just hours after being officially confirmed as the new 2023 European captain.

“Well, I have signed a contract, and I intend to see that through”, Donald said in response to a London-based tabloid newspaperman.

“I’m giving you my word that I will be here for the next 14 months. I’m excited about this opportunity, I really am. The Ryder Cup means so much to me and I’m not going to take this lightly, so I will see you in Rome”.

It was earlier in the conference when Donald made it clear he would not be drawn into the ongoing controversy tearing the men’s pro game apart while also declaring that while he was disappointed not to be first awarded the 2023 captaincy in March, he’s honoured to be now leading Europe into battle next year in Rome.

Donald takes over the European team reins after Stenson was controversially stripped of the captaincy just 147 days after we now learn he beat Donald to the role.

The 44-year-old Donald will now lead Europe into a 44th Ryder Cup with 14 months of seemingly continued uncertainty as to whether those like Stenson, Lee Westwood, Sergio Garcia and other LIV players, will be ‘legally’ allowed to qualify. But any nervousness, concern or anxiety has never been a part of the Englishman’s golfing DNA as again was evident in hosting a Zoom conference following the DP World Tour’s formal announcement of the role on Monday.

“I’m very, very excited, and it’s a huge privilege and an honour and I can’t wait to get started”, said.  “I had no second thoughts, no uncertainty though, to be honest, I was disappointed I didn’t get the nod back in March, but sometimes we’re given second chances, and I’m thoroughly looking forward to making the most of it. So, I’m very, very excited.

“And given the opportunity to be a Ryder Cup Captain is something — one of the greatest honours I can have in my golfing career. I’m extremely excited about this opportunity, and I plan to make the most of it”.

Donald went as far as to liken being offered the European captaincy as a ‘Life Achievement’ award.

“I’m certainly excited about the opportunity, and when I found out I had a second chance, I grabbed at it to be honest with you”, he said. “This is something I’ve always wanted to do.  I’ve had amazing experiences in Ryder Cups, and this feels kind of like a Lifetime Achievement Award in a way; a kind of reward for everything I’ve done for The Ryder Cup and for golf, and to be a part of this is truly, truly very special”.

However, it was only three questions into the conference when Donald was asked a direct LIV Golf related question, and that was whether the Englishman believes the breakaway Europeans should be in position to be selected for Rome.

“Well, obviously part of being a captain is to create a strong 12-man unified team, and I’ll be working on that over the next 14 months”, he said.

“I’m not here really to talk about LIV and whether they will be eligible or not. That’s to be seen and kind of a hypothetical question. But certainly over the next few months, hopefully we’ll have some clarity on that situation and we can start making some decisions about that when they become more clear”.

Though it led to a question as to whether the contract Donald signed, the one Stenson broke, does allow now LIV Golf players to be selected should the ‘goal posts’ change in coming months.

Donald deflected that question to Guy Kinnings, the European Ryder Cup Director sitting beside him.

“There are legal appeals ongoing, and until such time the players are entitled to play; and therefore, you know, The Ryder Cup qualification process when it does get announced, then that has to be something that Luke will be working on with us”, said Kinnings.

“Then the points will run, but I suspect they will be much as they are with The PGA of America, listing players that are mentioned but subject to eligibility. As we said, that’s all to be seen in the coming weeks, and we’ll work around whatever is needed to help Luke in the cause as he says”.

Of course, Stenson’s sacking remained a hot theme in the conference and Kinnings, who no doubt announced the news to Stenson, asked if he felt Stensons move to LIV had let down the DP World Tour?

“We’re disappointed, but Henrik made his decision and we respect that”, said Kinnings.

“You know, we are now focused on the future. As I mentioned earlier, we have a great team who work hard the whole time; from the moment we finish a Ryder Cup, we are immediately looking at ways we can improve and do things better.  That process has been ongoing. We are now just excited to get behind Luke. Things happen for a reason. We have now got a great captain. We will get behind him and do everything to be ready to win next year”.