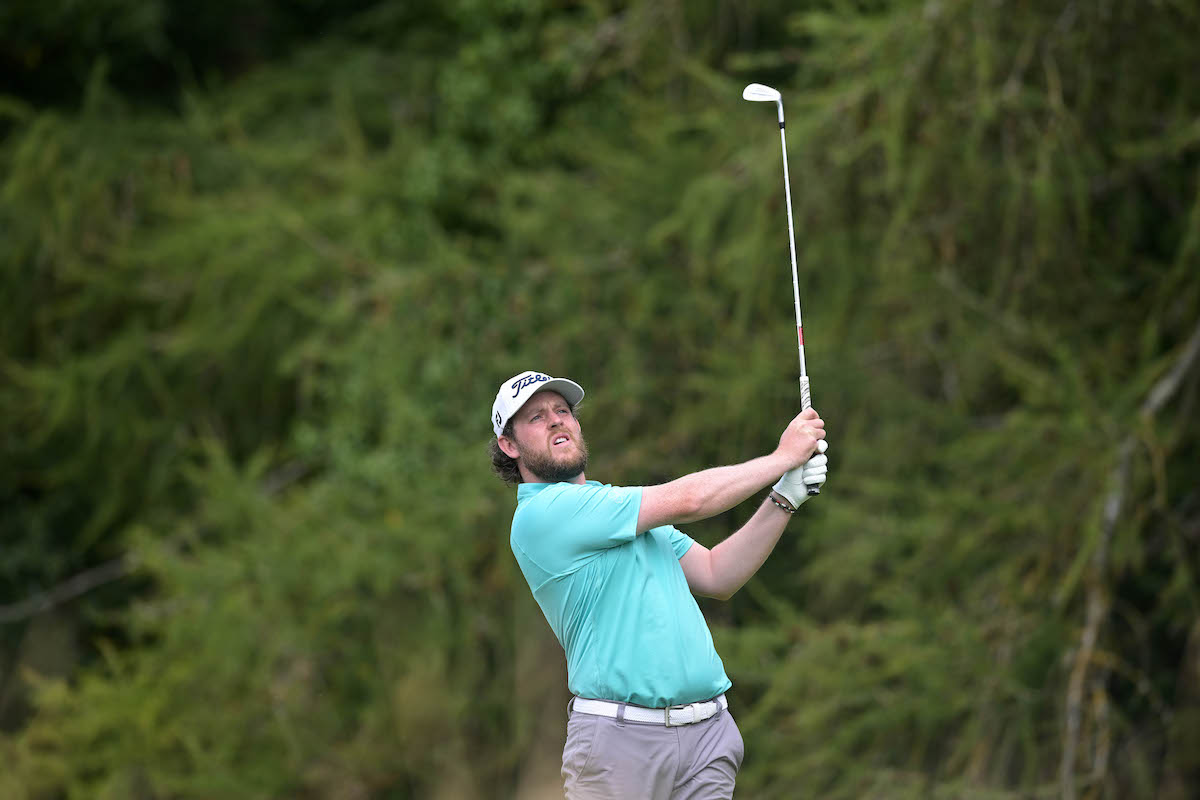 Matthew McClean on Day Two of the Irish Challenge 2022 at The K Club on July 29, 2022 in Straffan, Ireland. (Photo by Charles McQuillan/Getty Images)

Matthew McClean and Robert Moran are both trending nicely ahead of next week’s Home Internationals after both players made the cut at the Irish Challenge and will fly the flag for Irish amateur golf at the K Club this weekend.

Two thirds of Ireland’s winning St Andrew’s Trophy representatives are both locked together on four-under after contrasting rounds. McClean dazzled on Friday morning with a bogey-free 66 to jump from below the cut line and into the middle of the chasing pack. While Moran put on a late spurt to guarantee his passage into the weekend.

Both players have made the step up to the Challenge Tour like a duck to water and appear very comfortable at this level and at the time of writing are just outside the top-25 with hopes high for both of a good finish.

Malone’s McClean rose over 70 places having began the day on two-over after an opening 74 but he made up considerable ground on his front nine with birdies on 11, 14 and 16 bringing him onto the cut mark.

The 29-year-old was looking up rather than down after three birdies in four holes including two 15-foot putts on the 4th and 5th brought him to –4 and he feels a more obedient flat stick was the difference.

“I played lovely, didn’t really come close to a bogey really so it was lovely,” said the Portrush Scratch Cup winner. “Didn’t birdie any of the par fives either so maybe a few chances went. Missed a two-footer on 12 as well so that wasn’t ideal but I played lovely it was exactly what I was trying to do after yesterday.

“Just putted a lot better today. Played OK yesterday but held nothing and missed a few four footers. Played much better today but held a couple of 15-20 footers which keeps the round going.

“Those sort of putts sometimes go in or sometimes don’t drop at all, yesterday was the opposite, today a good few of them went in so that kept me going and I didn’t really make any mistakes.”

It has been an extremely consistent season for the Belfast man who has been desperately unlucky not to chalk up multiple wins this year. McClean has registered runner-up finishes in both the Irish Amateur and North of Ireland Opens this term while he has also showcased his talents abroad with top-10s at the Amateur (10th), the English Amateur Open (3rd) and the Lytham Trophy (6th).

He can now add his maiden cut in a professional tournament to an increasingly impressive season. After getting the call to tee it up in the K Club only on Sunday, this week has proven the perfect warm up ahead of next week’s Home Internationals in Ballyliffin where Niall MacSweeney’s Boys in Green will defend the title they won in dramatic style last year.

“The cut realistically was the goal now anything is a bonus no matter what you do this week so I’ll try and go out and have a good round tomorrow and see how high I can finish.

“I was meant to have a week of rest and practice and got the phonecall on Sunday to ask if I wanted to play. I was never going to say no. It’s good to get some competitive golf in at a very good standard so hopefully it raises my standard to keep up with them.

“I’ve been pretty consistent all year I’ve played nicely most weeks but playing lovely and it’s obviously nice to play well this week and even better if you’re playing well so a bit of a free week so give it a go and see what happens,” added McClean who will be joined in Donegal by Moran who also had to shelve plans of a rest week.

“I was planning on taking the week off and chilling at home but it’s probably the best thing that I’m playing loads of golf and I am staying at home this week so I won’t be that knackered,” chuckled Moran. “It’s nice just to play through the week so I can stay as sharp as possible.

“It’s four and a half hours up to Ballyliffin on Monday and I was actually looking at flights but it’s almost two hours so I scrapped that then I have Barton Shield on the Saturday so that’s a lot of golf, a long week, especially if we win.’

The Castle golfer was leading the amateur charge after a four-under 68 and after two birdies in his first three holes on Friday eyebrows were raised at the potential for a Lowryesque week.

However, a dropped shot on the 4th was followed by a double-bogey on the 9th and a bogey on eleven as the 22-year-old fell back to two-under after three successive three-putts. He did recover his composure with two birdies in his last four including a birdie on 18. Generally known as one of the more aggressive players in Irish amateur golf, Moran played the percentages and it paid off.

“I tried to miss the cut as badly as I could. I played pretty nicely but three-putted nine, ten and eleven and then a few holes like 12 and 13 are quite tricky. Missed a short birdie putt on 14, played 15 lovely birdied it, 16 just had to make par and then I talked myself out of going for 18 in two thinking I had a few shots to play with and layed it up.

“I stiffed the wedge shot so that was a nice way to finish. I’m not usually one to not go for it but when you hit the wedge shot close you think ‘I should do this more often.’ It’s nice that way.

“The first few holes we had it lovely and calm and then the wind blew a completely different direction to yesterday but even just thinking it made it slightly trickier, the greens are rapid and it’s hard to leave uphill putts, there are a few scorable holes but a few that can catch you out like the ninth for me.”