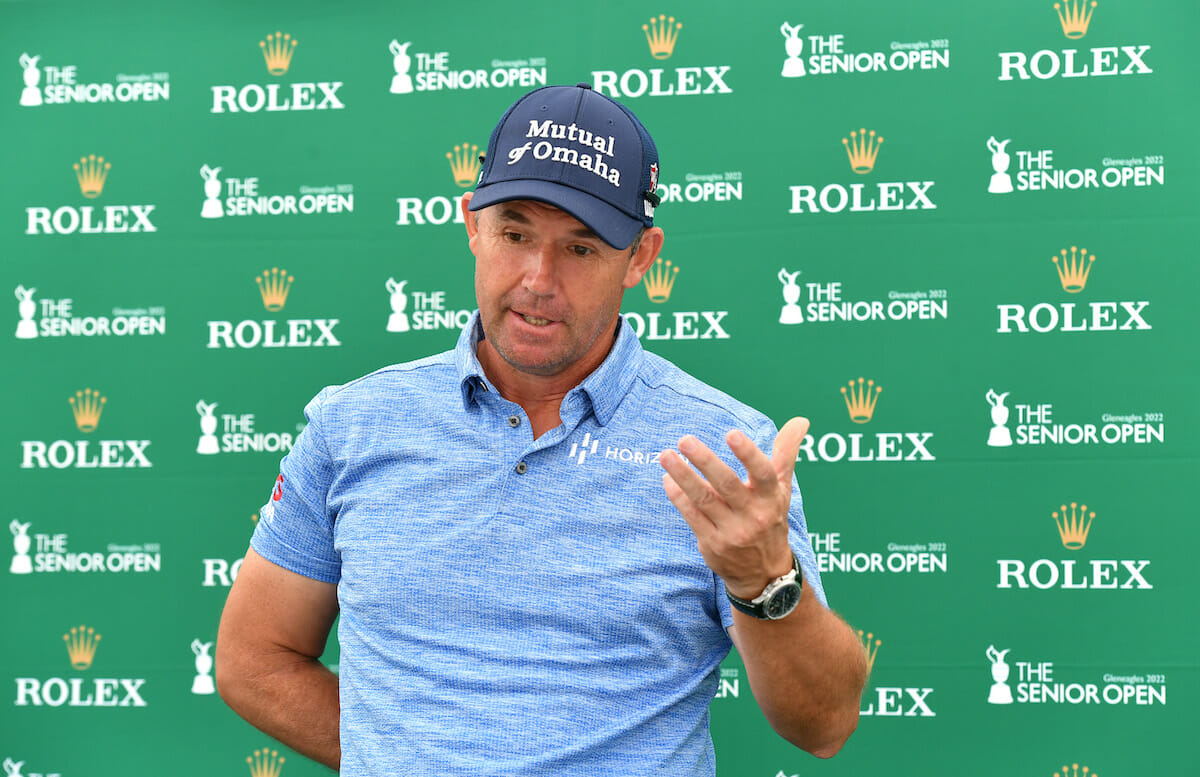 Padraig Harrington speaks at a media conference prior to The Senior Open Presented by Rolex at The King's Course at Gleneagles on July 20, 2022 in Auchterarder, United Kingdom. (Photo by Mark Runnacles/Getty Images)

Padraig Harrington has criticised Henrik Stenson’s decision to join LIV Golf and that has now seen the Swede unceremoniously dumped by the DP World Tour as the 2023 European Ryder Cup Captain.

Stenson was named in March this year as Europe’s team captain, and after a decision by a five-man committee comprising the likes of the immediate past three European Team captains including Darren Clarke, Thomas Bjorn and Harrington.

However, talk of Stenson potential Rome sacking was confirmed today by the DP World Tour in a statement declaring: “In light of decisions made by Henrik in relation to his personal circumstances he will not be able to fulfil certain contractual obligations to Ryder Cup Europe that he had committed to prior to his announcement as Captain on Tuesday, March 15, 2022, and it is therefore not possible for him to continue in the role of Captain.

“Confirmation of the new 2023 European Ryder Cup Captain will be made in due course. Ryder Cup Europe will be making no further comment on any aspect of the process until that time.”

It’s all very sad with Stenson’s captaincy sacking yet another sad chapter in the golfing establishment versus LIV Golf.

Stenson seemed a natural appointment in following Harrington as a European Ryder Cup captain, and with the 2016 Open Championship winner, proudly accepting the role and also announcing the appointment of Bjorn and Edoardo Molinari as vice-captains for the 2023 match on the Marco Simone course in Rome.

But it’s not to be and with the DP World Tour now again in damage-control mode, and with many already criticising the Tour for pulling the carpet out from under Stenson, given his long-time pro career support of the Tour.

Harrington, and competing at this week’s Rolex-backed Senior Open at Gleneagles, was very disappointed with the news.

“I certainly empathise with anybody who has made the decisions they’ve made, going to play a new tour, when the financial incentives are quite impressive,” said Harrington.

“I do think it’s different in Henrik’s case. He signed a contract not to do that, he was specifically asked not to do that. So, no empathy there.

“He took the Ryder Cup job when LIV was in doubt. Now LIV is pretty much mainstream normalised, he’s jumped ship.”

“The tour will tell you he had a signed contract. I suppose he could say if there were more commitments asked. But it’s different when you sign up to do something and he wanted to take something on when LIV looked like it wasn’t going to happen.

“Now LIV is pretty close to mainstream, there’s certainly less risk in joining that tour, he’s gone over. I know it’s a financial decision and we’re all here to make money and things like that, but there is an element of signing up to do something. And as much as it might not suit him now.

“Financially, being the Ryder Cup captain in Europe is very lucrative, obviously it’s better to go over to LIV. But sometimes when you sign up to something you have to accept you made a decision at the time and you’ve got to stick with it. He’s done what he said he wouldn’t do.”

Clarke, and joining Harrington in competing at Gleneagles this week, was equally disappointed as Harrington with confirmation of Stenson’s move

“As for the process to find who will replace him, I was part of the last committee, and I’m not sure if they will have the same committee again so that we can take a look at candidates and go through the same process”, said Clarke.

And Paul McGinley, who led Europe to victory in 2014 at Gleneagles in 2014, disappointed with the circumstances of Stenson’s sacking, was also somewhat sympathetic to the situation Stenson found himself in.

“I feel a bond with Henrik through all the times we’ve played together in Ryder Cups and particularly when I captained him”, said McGinley. “He was an awesome player for me, one of the stars of the team, both on and off the course.

“I’m sure this was not an easy decision for him. But, ultimately, he has made that decision. It’s something that disappoints me. But I can understand. I’m not going to come down on any of the guys who have gone to LIV. They’ve been offered huge amounts of money.

“For Henrik, it’s life-changing at this stage of his career. It’s unlikely he is ever going to earn that kind of money going forward. So I can understand.

“But is he doing it to revolutionise a game that needs to be changed? No. He’s doing it for money. I’m sure he’s not going to come out of this looking good, but that is for others to judge, not me.

“I had a great relationship as a captain and a player over the years. So I’m not going to slam him for making a judgement call. Everyone is entitled to their own view of things. But this is incredibly disappointing for the Ryder Cup. There is no doubt about that.”

Colin Montgomerie, the victorious 2010 Celtic Manor winning captain probably best summed it up saying: “It is a very sad day for European golf.”